‘What they’re doing down south is causing this to happen.’ 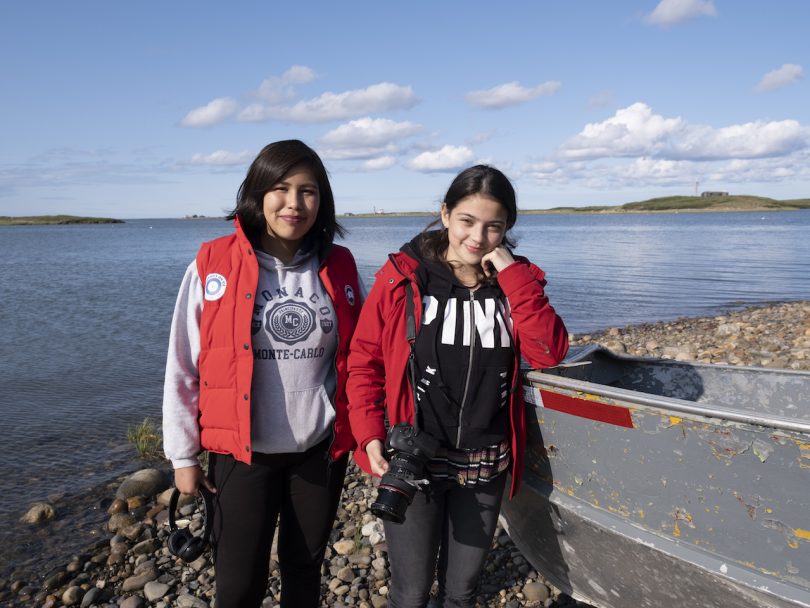 Carmen and Eriel in their hometown of Tuktoyaktuk, a hamlet on the Beaufort Sea facing accelerated coastal erosion due to climate change.

Tuktoyaktuk is falling into the ocean. The hamlet, on the Beaufort Sea in the Northwest Territories, is one of the communities that’s the hardest hit by coastal erosion in the world. As winters warm and sea ice fails to form, the waves of ever-fiercer storms take out up to two metres of shoreline each year. Add in permafrost thaw, and the process is pushed into overdrive, threatening houses, offices, even the cemetery. Eriel Lugt and Carmen Kuptana fear their hometown is being erased from the map—and they want the world to know. So, as part of the film production start-up TukTV, the 17-year-olds and five other Inuvialuit youth made a film about the impact of climate change on Tuk and on traditional culture. (Eriel, for instance, lives in a house that’s teetering on a rapidly eroding beach.) In December, they’re presenting Happening to Us at the COP25 UN Climate Change Conference in Madrid. Here, they tell us what it’s like to stand on the brink, what southern Canadians need to understand and what it means to be connected to the land.

Eriel: On the map, Tuk is a little spit. If people realized that that little spit has people like us living on it, they’d think, Is that actually a place? Can you go there? They need to understand that the ocean is coming in and we’re worried about our land coming off the map. We need them to realize that what they’re doing down south is causing this to happen. Down south, people work, work, work and pay taxes, and what’s that all for? If they stopped to see the beauty of nature, they wouldn’t care about buying stuff that makes climate change happen.

Carmen: Climate change is also changing the people and our culture. There’s so much land that we use but that’s being erased because of coastal erosion. Our weather didn’t use to be like this 50 years ago. Elders say the sea and lake ice freezes later in fall and melts earlier in spring and there are more sudden storms, so it’s no longer safe to go out on the land. The animal migrations are also different. All of this means we can’t go hunting like we used to.

Eriel: When I was a kid, we used to play on one of the two pingos [mounds made of earth-covered ice] in town. The one with the log house used to be solid when you climbed up on it, but now it’s just mud. And the other pingo is caving in. And the beaches, like the one by my house, are tiny now. They used to be much wider and we would play there and go swimming. It worries me that some world leaders don’t care about climate change. It’s maddening that Donald Trump doesn’t want his country or his young people to fight for their future; he just wants all the money right now. He doesn’t care about how we’ll feel when we have to clean up his mess.

Carmen: Our world is so modern that we’re forgetting our old ways, how we should never waste and how we can reuse stuff. We don’t need to drive all the time; we live in a small community, and we don’t need to be on our phones all the time. I want to learn how to hunt. I’ve been out hunting with my family, but I’ve never killed an animal myself. I want to learn that from my mom—I want it to be special.

Eriel: When my cousin Sophie goes fishing and setting nets, she always asks me to go and help her. I had never fished before, but she taught me how to take the fish out of the net. That’s cool.

Carmen: Residential schools took a good chunk of our aboriginal learning; we lost how things are supposed to be done just by being modern. My dad and grandparents went to residential school, and I’ve heard stories. Our people were put down on if they talked in their native tongue and discriminated against for being Indigenous. People still struggle with that, it’s frightening them. The children were taken away from the land, and now the land is being taken away from the children. Our culture is being erased year after year, because we’ve become so modern we’re forgetting our traditions. When I have kids, I want to show them how to do my stuff and raise them to be a strong Indigenous woman or a strong Indigenous man.

Eriel: White people could have more respect for Inuvialuit.

Carmen: It’s not about that. It’s about everyone having more respect for the land and each other. We all live on the same world, and if climate change is affecting us now, it’s going to affect people elsewhere down the line. 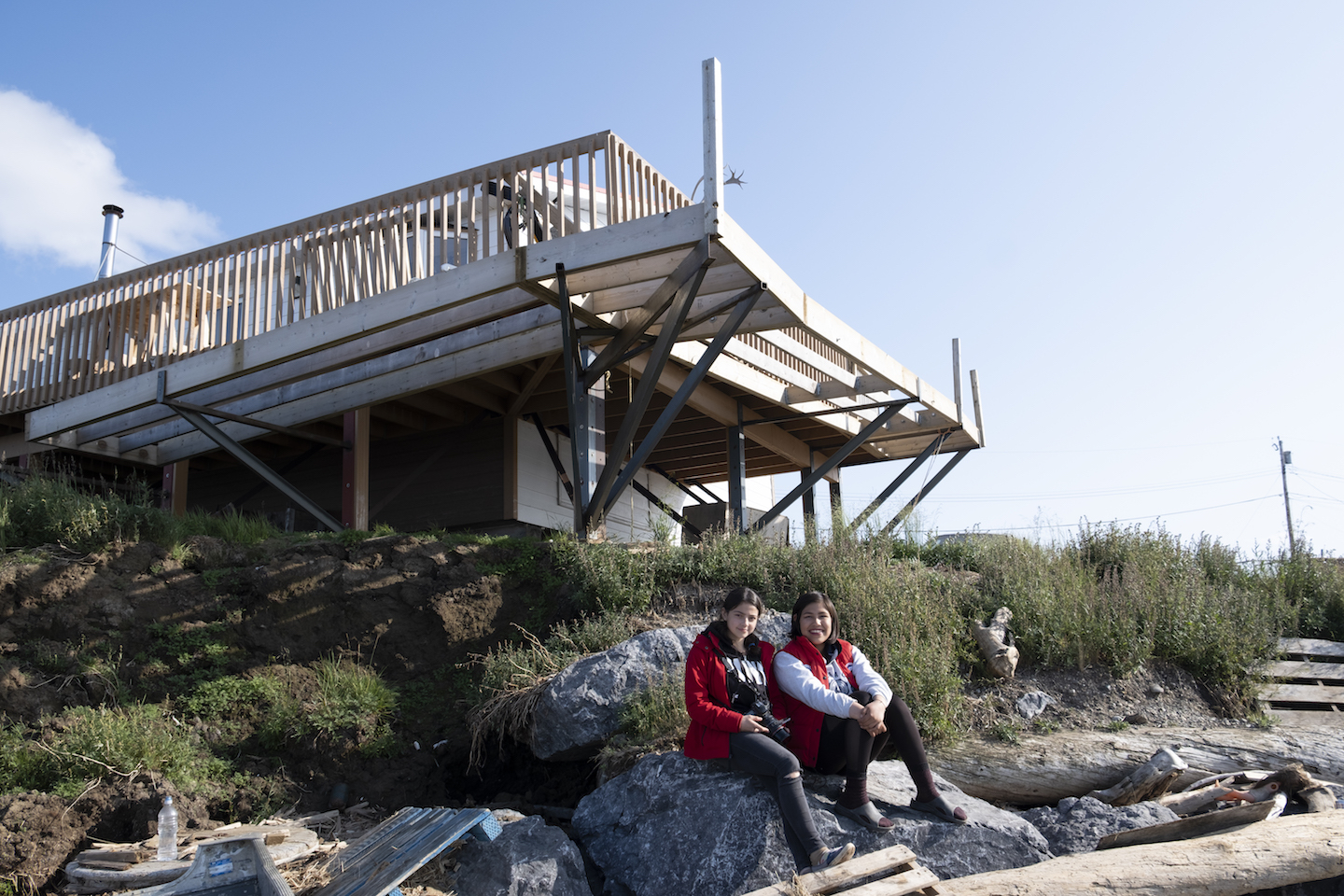 Eriel’s home teeters on the edge of a rapidly eroding beach.

On to the United Nations COP25 climate conference in Madrid

Eriel: When [then environment minister] Catherine McKenna was here in June [to introduce the National Inuit Climate Change Strategy], she invited us to come to the climate conference, but we got the official invitation [from the Inuit Circumpolar Council] in September. Four of us kids from TukTV are going. It’s an honour, but also feels like a mission to show the UN and the world our little community and how climate change affects us. I’m kind of nervous but also excited. After we show the film, we’ll answer questions. I hope leaders will look at all the little communities up north and see that we need help from scientists to show us how we can be protected. I hope to learn more about what people are doing about climate change and what I can do in my community.

On finding hope, happiness and pride

Eriel: I want Tuk to be developed and not so isolated and expensive, for people to have an easier life and better schooling. But as we get developed, I hope we go green so we don’t make climate change worse, and we become a role model for other communities in the world. What makes me happy here is nature. Every night, I take time to admire how beautiful everything is. Down south you can’t do that; you either go to a fast-food place or you go to the movies, and you have to pay for everything. Here you can do anything you want because there’s so much free space.

Carmen: My favourite experience is going out on the land, because it’s fun and beautiful, and the air is so clear. I grew up in a big family and we’ve always gone out on the land, to fish, to pick berries, to hunt. I love that time; it’s how we live.

Eriel: I only go out on the land when I do my monitoring work [with a community-based climate monitoring group] to track changes. We measure snow depth and permafrost thickness, take water samples from lakes and count berries. But I like going to the pingos, going right on top and seeing the town. And play on the sand spit on the side of Ibyuk, the tallest pingo. We always run down. One time there was a bear on the side, and we had to wait for my uncle to come with a gun—we call him uncle but he’s my auntie’s boyfriend—and then we had to leave right away.

Carmen: I want to stay and help Tuk, but to help Tuk I need to leave to get a good education. I want Tuk to thrive with its culture, and I want people to hear my voice, my thoughts on how I feel about my land and culture. Colonialism still affects people. But we are here and we’re proud to be Inuit. We’ve been connected across the Arctic for thousands of years. Our people were so courageous and brave to live out here. It’s wonderful how they survived and how they lived.

Eriel: Maybe if white people learned how we did those things, they’d want to do them with us. It is all one country, Canada. Maybe we can all work together.