Last night I sent my kid to bed and promised him everything would be fine. Now our job is to make sure it’s true. 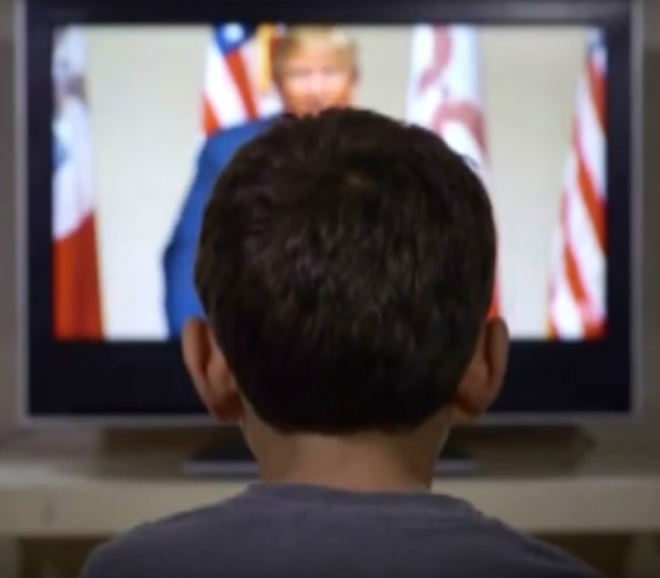 Around one in the morning, before the U.S. election had been called, but when the math was clearly adding up to a Donald Trump victory, Van Jones, the usually unflappable CNN commentator, was visibly shaken. “It’s hard to be a parent tonight for a lot of us,” he said. “You tell your kids don’t be a bully, don’t be a bigot, do your homework and be prepared.” He paused. “You have people putting their children to bed tonight and they’re afraid of breakfast. How do I explain this to my children?”

This question was on many parents’ minds. A little earlier, Jessica Lustig, an editor at the New York Times Magazine had tweeted: “Sent 13-yr-old to bed wearing ‘the future is female’ T-shirt and tears in her eyes. Don’t know what to tell her about our country in the AM.”

What can we say? I also sent my 13-year-old to bed last night, worried about the results. Yesterday afternoon, when he’d asked me what would happen to Canada if Trump won, I was feeling confident about Hillary Clinton. My news feeds had been full of giddy American voters in pantsuits and “I’m With Her” T-shirts. Every poll indicated a Clinton victory. I promised my kid everything was going to be fine.

For Canadians, a lot will remain fine: It’s not our Supreme Court that will be reconstituted, it’s not our civil liberties that will be bulldozed, it’s not our healthcare and education systems that will be ravaged. But we won’t be fully spared. America’s coming economic crisis will be felt here. And Trump’s policies on trade, border security and, most ominously, on climate change — which he’s called a hoax — put our future in grave risk, too.

And the impulses that drove Trump to victory — the bigotry, fear, isolationism, selfishness, willful stupidity and arrogance — don’t recognize international borders. Conservative leadership hopeful Kellie Leitch has already called Trump’s victory an “exciting message that needs to be delivered in Canada as well.” Canada doesn’t breed extremism the way the U.S. does, but there are plenty here who share Trump’s loathing of Muslims, immigrants and people of colour, and his contempt for women, LGBT people and people with disabilities. His win may embolden them. And my son knows what this means for him and his family — he’s an Ojibwe/Oji-Cree boy with lesbian parents — and what it means for anyone else seen as The Other. 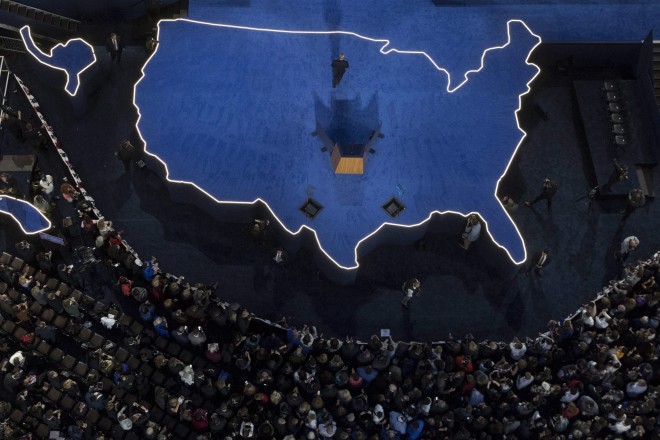 The empty stage on which Hillary Clinton had planned to deliver her acceptance speech. Photo, Canadian Press/Patrick Semansky/AP.

Parents in the U.S. and Canada have already been having hard conversations with their kids, about terrorism and global warming, about police who kill black and brown children, about mass shootings, about hateful words scrawled on mosques and synagogues, about the legacy of residential schools. When we had those talks, though, we could draw on hope. We could act as grown-ups who mitigate our children’s anxiety by pointing to institutions and authorities working on the side of good. We could empower our kids by telling them about social justice and civil rights movements, the give-and-take of a healthy democratic process, the power of the free press, and laws that protect the rights of minorities, and legal systems where justice can be sought.

With Trump’s win, it doesn’t feel like there are any grown-ups in the room anymore. His presidency is without precedent. As a New York Times editorial put it today, “We don’t know how Mr. Trump would carry out basic functions of the executive… We don’t know if he has the capacity to focus on any issue and arrive at a rational conclusion. We don’t know if he has any idea what it means to control the largest nuclear arsenal in the world. Here is what we do know: We know Mr. Trump is the most unprepared president-elect in modern history.”

Trump’s potential impact on his country is all the more frightening because so much is unknown. The Los Angeles Times has reported that Latino children are terrified that they and their parents will be deported. Muslim parents worry their kids will be bullied and attacked. Black parents already know what Trump means for their kids — he’s an advocate of stop-and-frisk policies that will disproportionately target their children, and he called for the execution of the Central Park Five, innocent black and brown teenagers who were falsely incarcerated for rape.

The LGBT community, who only a year ago saw the White House lit up in rainbow colours to celebrate marriage equality, now wonder if they will lose this recognition and other rights that protect their families and children. What’s more, white Americans — men and women — elected Trump in what Van Jones called “a white-lash against a changing country… a white-lash against a black president.”

Instead of waking up this morning to the historic election of the first female U.S. president, a woman who represented a joyful, optimistic, pluralistic America, our kids woke up to Trump and all the rage, negativity and destructiveness he represents.

So how do we explain this to them? I don’t know. But here’s what I will tell mine: We love you, we’re in this with you, and we won’t stop fighting for what’s good and just. And you don’t be a bully, you don’t be a bigot, you do your homework and you be prepared. Because the world needs your generation and all its brightness and beauty and hope more than ever.

More:
5 things I learned as a Canadian volunteering for Hillary Clinton
Prince Harry chastises press for harsh treatment of new girlfriend
Why I didn’t say goodbye to my dying mother