Only Trump can make Trump look this gross

Despite reams of evidence that Donald Trump treats women horribly, it took a "hot mic" videotape for any of it to hurt his campaign. Why do his words carry more weight than those of dozens of women? 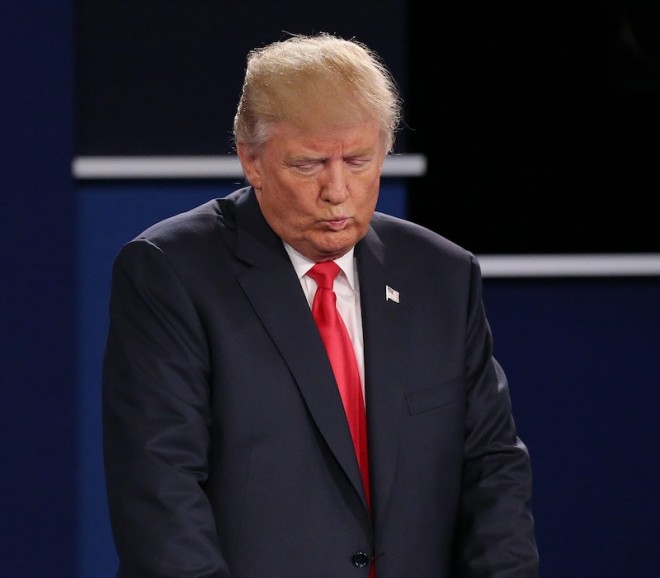 Anyone with the slightest awareness of Donald Trump’s history shouldn’t have been surprised by the video that dropped on Friday. Caught on a hot mic en route to an Access Hollywood appearance in 2005, the Republican presidential nominee boasts about his ability to grope and kiss women without consent.

His braggadocio was enabled by TV personality Billy Bush, playing the sniggering, suck-up sidekick to the preppy villain in a 1980s teen movie. The exchange is gross and ugly, from the “moved on her like a bitch” and the “big phony tits” to the “grab them by the pussy” and the hug forced onto the unsuspecting Arianne Zucker, the soap star who had to smile pleasantly while escorting the creepy duo to set.

Over the weekend, Trump’s already-tanking campaign was in full meltdown. High-profile male conservatives scrambled to TV and Twitter to patronizingly explain that “as husbands and as fathers of daughters” they were offended by Trump’s words.

Millions tuned in to the second presidential debate hoping for some sort of reckoning or catharsis. Instead, Trump continued to brush off his comments as “locker room talk.” Worse, he attempted to deflect attention about his sexual misconduct by turning it on Bill Clinton. Prior to the debate, he held a press conference with Paula Jones, Kathleen Willey and Juanita Broaddrick — three women who have accused Bill Clinton of harassment and assault — and Kathy Shelton, who was raped at age 12 by a man that Hillary Clinton later defended when she was working as a lawyer. This was never about Bill, of course, or sticking up for women he wronged. It was an attempt to humiliate and bully Hillary. Trump, it should be said, once called Jones “a loser.”

Those of us long disgusted by Trump and alarmed by his political rise should be popping corks over his ongoing implosion — and we are. But it’s maddening that it took this long for his presidential campaign to go up in bright orange flames — and that it required video evidence to definitively prove he is a horrible, hateful and dangerous misogynist.

Related: Why the Robin Camp hearing is about more than one judge’s sexist comments

Nobody should be shocked by this latest revelation. Let’s examine his record: He’s sexualized his daughters (discussing one-year-old Tiffany’s cleavage and saying he wouldn’t mind dating Ivanka). He’s rated women on a scale of one to 10 and called those he doesn’t find attractive pigs and dogs. He told a contestant on The Apprentice “it must be a pretty picture you dropping to your knees,” and after journalist Megyn Kelly questioned him about it, he said she had blood “coming out of her whatever.”

A former beauty pageant contestant says Trump kissed her on the lips without permission when she was 21, and a journalist has revealed that a friend of hers was also kissed by Trump against her wishes after — get this — he popped a Tic Tac in his mouth. A business colleague named Jill Harth sued Trump in the 1990s for sexual harassment, describing an incident in which he pushed her against a wall, tried to kiss her, groped her and finally ordered her to remain silent. In a deposition, also from the ’90s, ex-wife Ivana Trump described a violent sexual encounter with her then-husband. And, earlier this year, a woman filed a lawsuit alleging that Trump raped her in 1994 when she was 13 years old.

Following the video’s release on Friday, tapping into the anger and frustration that so many women were feeling, author Kelly Oxford tweeted: “Women: tweet me your first assaults. They aren’t just stats. I’ll go first: Old man on city bus grabs my ‘pussy’ and smiles at me, I’m 12.” Within hours, she was receiving 50 replies per minute. In all, some 27 million people have responded to or visited her Twitter page. Ask any woman you know and she has a story of being belittled, insulted or bullied, or of being touched without consent, grabbed, terrorized or raped. How do the experiences of more than half the world count for so little against a bigoted, blowhard like Donald Trump?

Many of the former Trump apologists who are now distancing themselves aren’t doing so because they care about women’s rights — if they did, they would support rights to reproductive health care, family leave and equal pay. Nope, their collective rejection of Trump is not a sign of mass feminist enlightenment.

Conservatives are fleeing Trump because he’s losing and because, after he repeatedly and vociferously denigrated (and alienated) immigrants, African-Americans, Latinos, Muslims, and people with disabilities, the Republican party can’t afford to lose the support of white women.

Trust me on this: If the tape  had been released when Trump’s poll numbers were still competitive, those concerned husbands and fathers would have happily tossed their daughters and wives right under that Access Hollywood bus and stood by Trump’s lecherous side. Because Trump, for all his lies and wrong-headed thinking, is right about one thing. Whether it’s objectifying women, or discriminating against people of colour and Muslims, if you’re a rich, white, powerful and famous man, you can get away with it. Or to put it in his words: “You can do anything.”

More:
11 podcasts you need to listen to right now
Elastic-waist pants you’ll want to wear out of the house
Hey Kim Kardashian, that robbery wasn’t your fault