Where the dragon descends into the sea 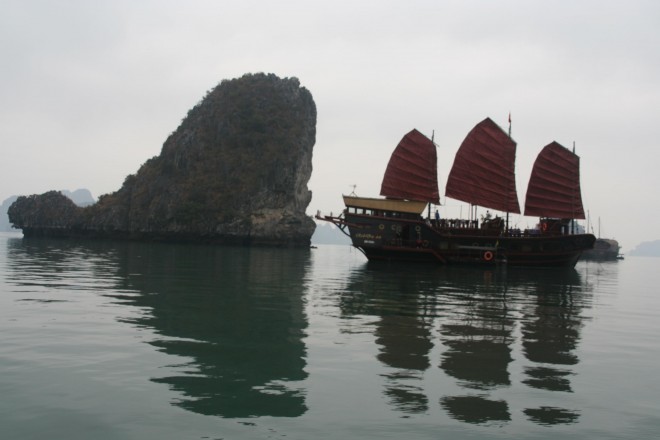 I wasn’t sure what I was in for pulling into Hon Gai harbour. This port, about three hours east of Hanoi, is a major embarkation point for passengers boarding boats to explore Halong Bay. The place is ripe with the smell of sewage and swarming with people anxious to set sail. Bags are grabbed, tagged and shuffled about while tourists are corralled into a large banquet hall where kitchen prep staff chop cabbage on the floor in plain view.

The bay itself was declared a World Heritage site in 1994 and is steeped in legend. Huge imposing limestone mountains jut out of murky green waters giving the whole place an otherworldly feel. “Halong” translates as “where the dragon descends into the sea” and it is said that the jaw-dropping islands of Halong Bay were created by a great dragon, who, while charging towards the coast, gouged giant valleys out of the rocky landscape. When it finally plunged into the sea the valleys filled with water leaving only huge karst peaks visible.

Still, I have to admit, arriving at the harbour it was hard to focus on the natural beauty of the area. Garbage floated around the 50 or so boats waiting to be boarded and the idea of dining on floor cabbage was weighing on me.

Luckily, once we boarded our luxury junk, The Dragon’s Pearl II  (the newest boat in the Indochina Junk fleet), things turned around completely. Our junk veered away from the other tour boats and headed towards Bai Tu Long Bay, a less frequented area where our only neighbours were the striking limestone pinnacles.

Our cabin (pictured below) was as beautiful and well-equipped as a swank hotel room – complete with robes and a luxurious shower with a port-hole that looked right out into the Gulf of Tonkin. We dropped our bags off and the 12 of us on the boat reconvened in the dining area for what we found out would be a nine-course lunch, which included the most DELICIOUS cabbage dish I’ve ever eaten. We cruised for a few hours, and then anchored to explore a limestone cave by foot after which we set out on a kayak tour in an attempt to burn off a bit of our enormous lunch. 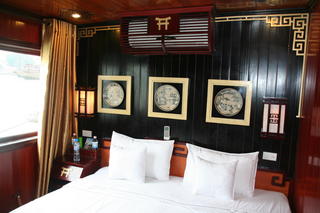 Dinner was just as grandiose. With each course the staff (there were about four of them who each did the jobs of four people) presented us an elaborate sculpture (first an eagle, then a dragon, then an exact replica of the junk we were sailing on) that they had created out of leftover pumpkins and carrot peels and somehow whipped up in the hour that we were out kayaking.

We spent the second day at sea exploring Vung Vieng, a floating fishing village (pictured below). The villagers, who used to inhabit the area’s limestone caves, have built their colourful homes atop planks of Styrofoam and, in addition to fishing, they make their money cultivating pearls (and selling them to visiting tourists). 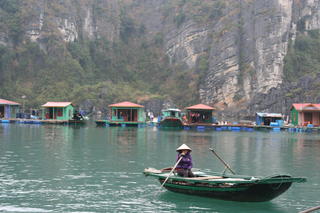 As we pulled back up to the reeking port of Hon Gai I found myself wishing I’d signed up for more days at sea. The cruise cost me $135 but I’m pretty sure by the time I make it back (and I will make it back one day) this sort of bargain for two days on a luxury junk will only be the stuff of legends.