It's time to revisit the cultural and culinary riches of Mexico City, and the palm-treed oases along the country’s Pacific coast. 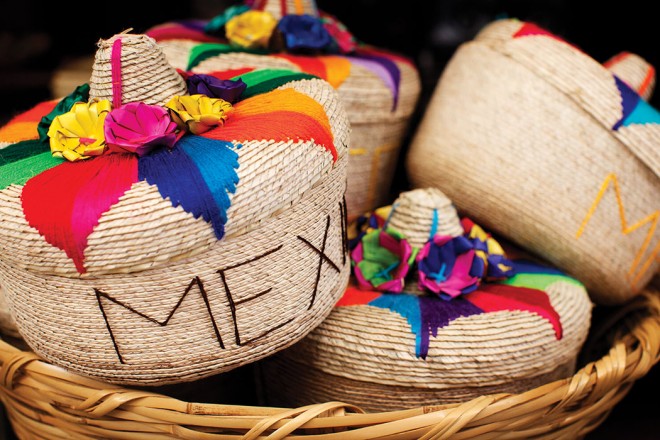 On the night I arrived in Mexico City, I casually mentioned to my dinner companion, who had been there before, that I like to explore new cities on foot. Was there anywhere she’d recommend for a morning run? “Oh, I don’t think that’s a good idea,” she said in alarm.

Mexico has been much maligned as a vacation destination of late, thanks to some high-profile incidents in which tourists were killed or kidnapped. Most of the country’s travel advisories concern areas in the north, where warring cartels and carjackers pose a very real threat. Unfortunately, the bad publicity is affecting tourism everywhere; the number of passengers filing off the cruise ships that drop anchor in the country’s ports decreased by 15 percent between 2010 and 2012. Yet, even though Mexico seems to have earned a reputation as the most dangerous place to take a holiday, according to the Department of Foreign Affairs you’re actually more likely to run into trouble on a trip to mainland China or even Jamaica (two of the tourist destinations most popular with Canadians).

Still, it was with some trepidation that I laced up my sneakers on my first morning there and texted my husband to let him know what I was up to (what he could have done to help me from Toronto, I’m not entirely sure). Then I tossed my wedding ring into my room safe and approached the concierge to inquire about a running route. Without hesitation, he pulled out a map and indicated a path through a nearby park, which is how I found myself jogging along the elegant Paseo de la Reforma — a magnificent, monument-studded boulevard modelled after the Champs Élysées — and on to Chapultepec Park. Not only is it the largest city park in Latin America, but it’s home to many of the city’s museums, as well as ancient Montezuma cypress trees, several glorious fountains, a zoo largely dedicated to native species and Chapultepec Castle, built by the Spanish monarchy in the 19th century for summer getaways. At the edge of the park, I joined other joggers on a shady running track com- plete with mile markers and what was clearly a group of regulars chatting between chin-ups at a well-maintained exercise station nearby. No one gave me a second glance, and I felt a little silly for having thought 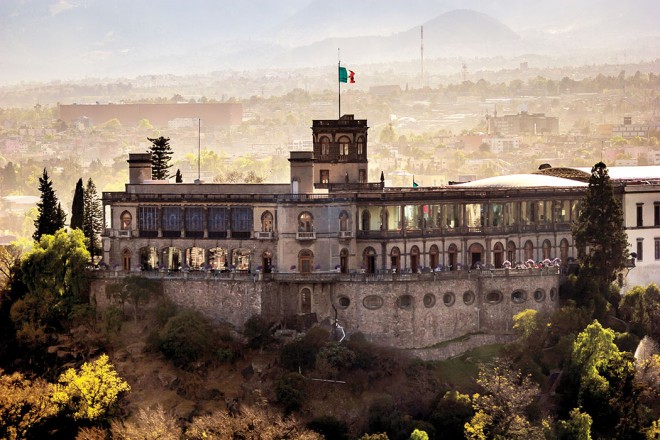 I needed to take precautions. But that’s what a few troubling headlines can do to a traveller’s psyche. In the case of Mexico, it can mean that many people will miss out on all the treasures the country has to offer. I was visiting only for a short time, but I never once felt uncomfortable or unsafe when I was out and about, exploring the city on my own. Of course, it didn’t hurt that I was staying at the luxurious St. Regis Hotel in the centre of Mexico City, where, when I entered the lobby after my run, I was approached by a man in white gloves carrying a glass of water on a silver tray — it took me a moment to realize he had been waiting there just for me. 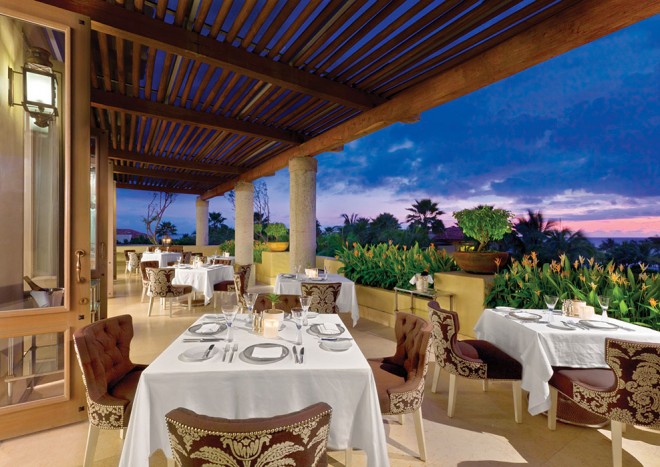 Carolina restaurant at St. Regis Punta Mita resort: Both food and decor are French with a Mexican flair (chairs are embroidered in the style of matador jackets). I highly recommend the sea bass.

My excursion that morning had been part work-out, part work, as I’d used the opportunity to map out the museums I most wanted to visit. After a quick breakfast, I returned to the park to check out the National Museum of Anthropology. Passing through its doors is like entering a children’s Choose Your Own Adventure book. On either side of a long open patio and a pond are 23 anterooms, each one waiting to transport you to a different world. I presented my map at the information booth and asked what a visitor should see if she had only an hour to spend. The attendant obligingly circled three rooms on the map: numbers 5 (Teotihuacan), 7 (Aztecs) and 10 (Maya). I wandered the ruins of these ancient civilizations and soaked up as much of their complicated histories of battle, bloodshed, art and architecture as an hour would allow. I would definitely have lingered, had I not had a polo match to attend.

Polo is immensely popular in Mexico, and in Mexico City it’s played at Campo Marte, a historic military polo ground. The sport is one of the oldest in the world (the first recorded game was played by the Persians in 600 BC) and one of the fastest: Polo ponies can reach a galloping speed of 60 km per hour, while balls can travel up to 170 km per hour. Ideally, you’ll sit next to someone who knows the game and can explain what a chukker is (a seven-minute time period), why left-handed players are banned (too dangerous) and how it is that horse and rider appear to play as one (polo ponies are amazing athletes and learn to follow the ball themselves). The whole thing is electrifying to watch. There’s even an entertaining halftime show when spectators are invited to descend onto the field, champagne in hand, to stomp the divots down with their stilettos (flats are recommended, but I didn’t see any evidence of them). 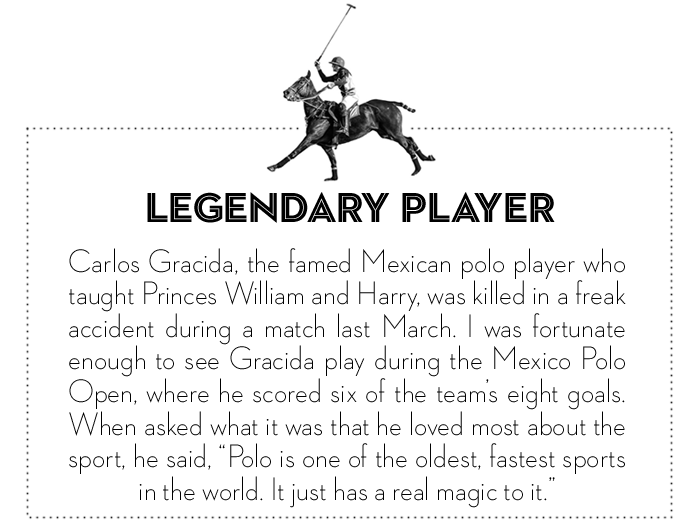 After a day of culture and the sport of kings, it seemed only fitting to conclude with some formal fare. Mexico City offers a diverse array of dining experiences, whether you’re in the mood for street food, fondas (low-key, family-run cafés) or fine dining. Although the city is land- locked, fresh fish is trucked in daily from the coasts — I still dream about the salmon I had at Mora Blanca (owned by renowned Mexican chef Daniel Ovadia, of Paxia fame) in the Polanco district. On another evening, I sampled a tast- ing menu at the St. Regis J&G Grill, where one of the highlights was roasted Yucatán grouper plated with aromatic black beans and cilantro purée. There was also a wonderfully savoury local-pumpkin soup with huitlacoche and chives. Huitlacoche is a fungus, also known as “corn smut,” and is a delicacy in Mexico — it gave the dish a wonderfully earthy, almost mushroomy flavour.

“People often think that Mexico’s cuisine is just tacos, garnacha or chimichanga-style bites, such as guacamole, nachos and burritos,” says Guy Santoro, executive chef at the St. Regis. “But the country’s culinary heritage goes far beyond the pre-Hispanic era, with a universe of possibilities and ingredients.” There were nine courses in all, culminating in a dessert of caramelized bananas with whisky pecan ice cream — a dish I swore at the outset I wouldn’t have room for but then couldn’t resist. 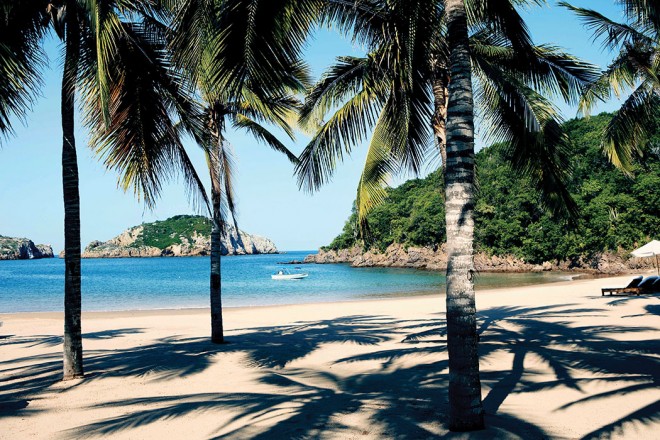 “A trip to Mexico just wouldn’t be complete without some time spent on the coast.” Photo, Brian Doben/Getty Images.

For many travellers, a trip to Mexico just wouldn’t be complete without some time spent on the coast. Fortunately, the pretty, cobblestoned streets of Puerto Vallarta are only a short flight away (just over an hour from terminal to terminal). There are resorts and hotels to accommodate any budget and plenty of ocean excursions to get you out on the water, whether you’re into deep-sea fishing or swimming with the dolphins. I stayed in the nearby beachfront village of Punta Mita, from where you can take a 15-minute boat ride to the Marietas Islands, a Mexican national park. In December, microbiologists and tourists alike descend on the region to watch the magical spawning of humpback whales. Regardless of the time of year, the water around the Marietas is so clear that you don’t need a mask to see the yellow and blue flashes of tropical fish swim- ming by your feet. Our ocean-safari guide, a jovial, middle-aged man with a silver tooth in front and a black Yankees cap on his head, extolled the virtues of a secret underwater cave nearby. The cave turned out to be more “hidden” than “secret,” judging by the small flotilla moored at its mouth when we arrived, but the snorkelling was fantastic and the cave led to a white sandy beach surrounded by collapsed volcanic rock. We also visited a nearby bird sanctuary for a glimpse of the blue-footed boo- bie, then found a quiet bay perfectly suited for stand-up paddleboarding. 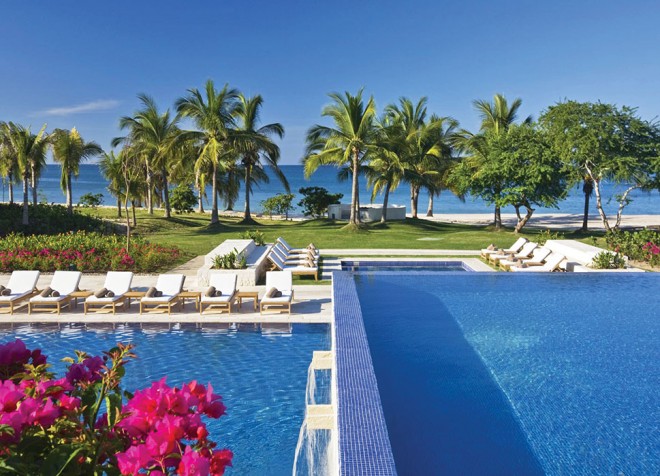 St. Regis Punta Mita resort: it takes 27 leisurely breaststrokes to get from one end of the palm-lined infinity pool to the other—and you’re unlikely to bump into anyone else along the way.

That night, after a memorably crisp margarita, I dined alfresco on subtly balanced red snapper ceviche and refreshing jicama-watermelon salad at the St. Regis Punta Mita Resort. I finished the evening stretched out on a chaise, contemplating my toes against the backdrop of a fiery sunset over the sea. Small waves made a gentle popping sound as they receded over the pebbles that dotted the shoreline, sounding like a ripple of applause along the beach. It was in that moment I began planning my next trip to Mexico — headlines be damned. 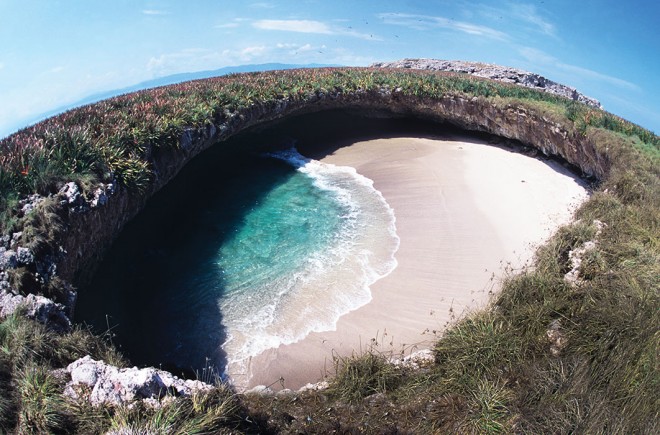 Hidden beach: This secluded beach in the Marietas Islands is believed to have been formed by bomb blasts in the early 1900s, when it was used for military tests by the Mexican government. Photo, Marc D Callanan/Getty Images.