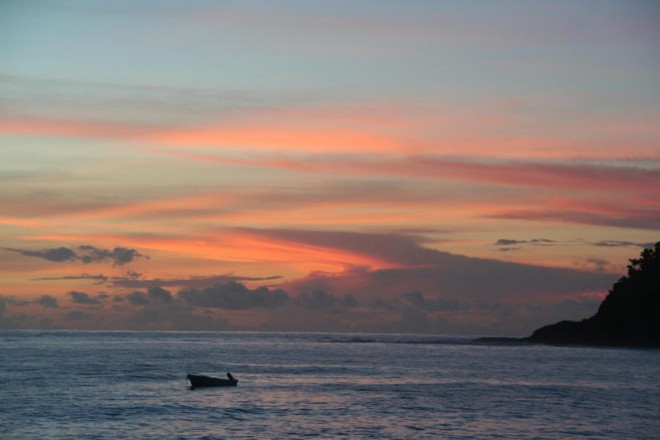 Before arriving in Fiji my impression of this country of over 300 islands was just simply that it was paradise. Sure, I’d seen the movies that had been filmed here, most of which revolve around being marooned on a deserted island (Cast Away and The Blue Lagoon for example) but, really, catastrophe was the last thing on my mind.

In many ways Fiji does live up to its reputation: friendly people, a laid-back lifestyle where things run on “Fiji Time” and wonderfully beautiful sandy beaches. That said, it’s been a relatively traumatic stay in paradise.

We arrived in Fiji late in the evening and spent our first night outside the city of Nadi on the main island of Viti Levu. I had read that the best beaches are located in the outlying islands so the following morning we boarded a boat for a secluded resort in the Yasawa group in Fiji’s northwest. The trip was only supposed to be an hour so we figured it was no big deal. That was, until the boat broke down.

There was a series of beeps, a sputter and then our small vessel carrying 10 people, an enormous fish and a sack of coconuts, lurched to a halt. Adrift in the South Pacific, I decided to gauge my panic in accordance with the Fijians on board – once they started to express concern I would start to worry. At first, it didn’t seem like a major problem. Twenty minutes later, after several dozen attempts to get the craft back in working order, the Fijians started to pull out their cell phones and point nervously at the rocky cliff we were drifting towards.

It was at this point that I began to think: Are these people around me the type of people that are likely to be lost at sea? Am I? Is this how I perish – in a sunken boat in the middle of the South Pacific?

It turns out the answer is no. Our driver figured out that the fuel pump to one of the boat’s engines had stopped working but we were able to run on one engine the rest of the way to the resort. In total the hour-long trip took three, but we arrived safely.

The resort staff awaited us singing and waving on the beach as our boat finally pulled in. Forming a line they each welcomed us as we disembarked and shook our hands as we made our way up to the main lodge. 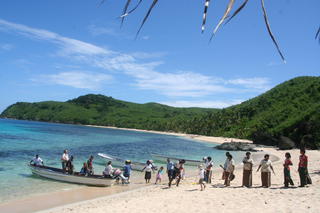 We spent the day exploring the pristine coral reef that flanked the property and at night we were treated to a traditional dance performance and kava ceremony, where we introduced ourselves over bowls of grog (a mildly-narcotic watery milk made from the dried root of the pepper tree) that numbed our tongues.

We retired to our room around midnight, slightly drunk and groggy, and fell fast asleep.

Two hours later there was a knock on the door. It was the resort manager. “Sorry to bother you. Um, you need to get up. There’s been a tsunami warning. Grab a blanket and whatever else you need and meet everyone in the bar. We have an hour and a half before it hits so we need to head to higher ground.”

I’m not sure if you’ve ever been trapped on a small island in the South Pacific awaiting an impending tsunami, but I’ll tell you: it’s a rather high stress situation. I felt like I’d been punched in the stomach.

I grabbed my laptop, camera, wallet, passport and quickly decided which one outfit I’d like to salvage out of my backpack and put it on, knowing that there was a possibility that I could lose everything else.

We met the other 50 or so travelers in the bar, which was buzzing with panicked whispers. There had been an earthquake registering 8.9 off the northeastern coast of Japan which had triggered a tsunami and Fiji was thought to be in its path of destruction. The resort manager asked us to sign a sheet to make sure we were accounted for and evacuated us to a hillside in close proximity to the resort. There, tarps were spread out, torches were lit and we all huddled together to wait out the impending natural disaster. It was 2am. The tsunami was scheduled to hit at 3:37am.

Was I spared drowning in a broken down boat out at sea to instead be swallowed up on land by a massive wall of water?

At 5am the sun started to rise and we were told we could head back down the hill. We returned to find everything just as it was. False alarm. Still, I barely slept the rest of the night thinking: What if they miscalculated the moment of impact?

Turns out Fiji was spared entirely but now seeing the destruction in Japan I feel heartsick for the people that this disaster did affect.

When we were in Japan just a few short months ago we met an incredible man named Fujii who went out of his way to make us feel at home in his country. Craig emailed Fujii the day after our tsunami scare to make sure he was okay. He replied that he was, ending his note saying “please pray for Japan”.

Usually, I imagine, when you visit a place like Fiji – where you rarely see a newspaper or have an internet connection – it’s quite easy to escape into your own blissful world of relaxation. I wouldn’t say that was quite the case in my experience though. Huddled together on the hill during our tsunami evacuation we met several people who had been in Christchurch during the earthquake there not long ago and the fear was still very much in their eyes.

I hope whatever saved me from several near-disasters in Fiji will now also help our friends to the north.

Tonight I will most definitely pray for Japan.