This koala hates me...

Either that or he’s turned around to fall back asleep. I was a little disappointed I missed my photo op with the world’s cutest bear – it’s a good thing Australia has plenty of other adorable creatures to bond with 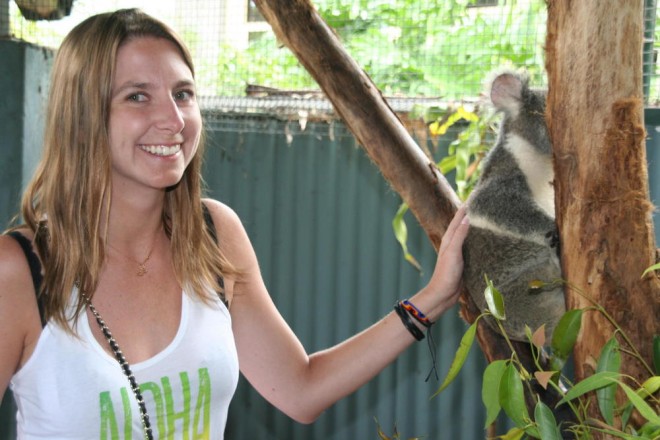 Reading back through my last couple of posts I realized that I’ve been griping quite a bit about all the creatures I’m terrified of running into during my travels in Australia. So, enough of that – as we cap off our last few days here I think I need to pay homage to the many adorable marsupials I’ve met.

If you don’t already love this place for the beaches, warm weather, charming people, and the fact that you can find an espresso that puts Starbucks to utter shame in even the smallest rural village, it’ll be the animals that get ya. Cockatoos – those beautiful white birds that eccentrics would buy in the ‘80s as conversation pieces – they’re a dime a dozen here. So are lorikeets, clad in rainbow-coloured feathers. Oh, and the storks! They’re like pelicans on steroids!

Anyways, birds are fine and good, but I wanted to see some furry creatures so on our way up to Byron Bay we made a stop at the Koala Hospital in Port Macquarie. This place is amazing. They even have an ambulance to rescue the little guys when they wind up on the side of the highway (apparently this happens a lot). A visit to the koala hospital means getting to know each of the bears (from a distance) and understanding why they’re there (strangely many of the bears have been hospitalized for chlamydia).

I learned a lot at the Koala Hospital. But, alas, you can’t really expect to hug a sick koala. And I really wanted a hug.

It may be irrational to be so hell-bent on hugging a wild animal, but the koala is kind of built for hugging (see below) – they spend all day embracing tree trunks and each other. There’s that, and the fact that everyone I’ve known who has ever visited Australia has gotten to hold a koala and be photographed with the dopey-eyed creature – it’s kind of a rite of passage for visiting this country. 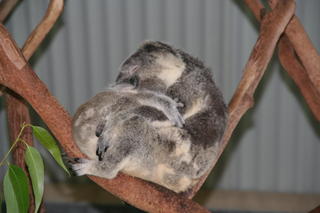 I found out a bit too late about a park in Brisbane that sounded very promising, but because we were already on our way south at the time we decided to stop back in Port Macquarie instead – this time at Billabong Koala and Wildlife Park where I was told I’d be offered the opportunity to pat a koala. I figured I would have to settle for a pat in lieu of a hug.

Well, it wasn’t exactly my lucky day. Figures that my one photo opportunity was with a camera-shy bear. He pretty much snubbed me. Luckily the park also had kangaroos so I got my cute-animal-interaction fix with these guys as they greedily nuzzled corn out of my palm. 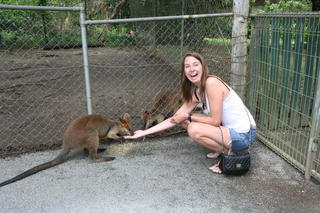 That said, I still have a few more days in Sydney before I’m on to my next destination so if anyone out there has any intel on where I can come by a more photogenic koala (example below) or has one that I could borrow for an hour or so please do let me know. 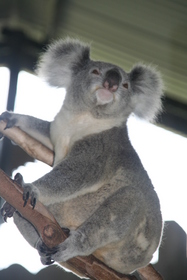