8 great late-night spots to hit up in Toronto

Whether you want to eat, laugh or just play some Cranium, the city has something for you. 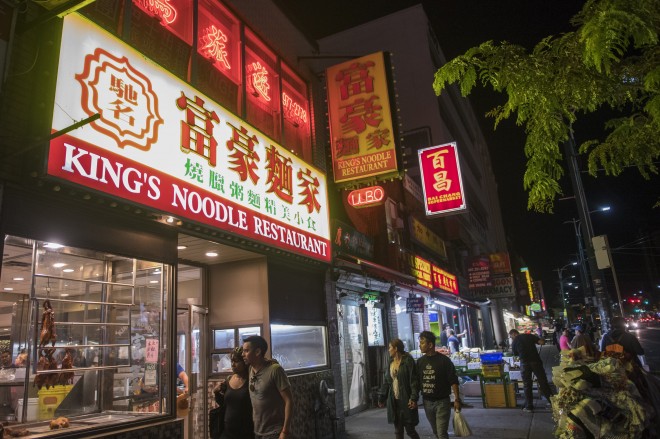 In partnership with Tourism Toronto

This isn’t quite the city that never sleeps — Torontonians need a little shut-eye to be so relentlessly polite — but plenty of doors stay open till the wee hours of the morning. Whether you’re looking for a good chuckle, a competitive round of Cranium or a sizzling plate of crispy beef, you’ll be covered.

The greater Toronto area has not one, not two, but seven distinct Chinatowns. If you’re in the market for the oldest (dating back to the late 19th century), the largest (up there with Vancouver, San Francisco and New York) and the greatest concentration of late-night restaurants (open till 5 a.m. on weekends!), head to Old Chinatown around Dundas and Spadina. You can stumble into any spot and be guaranteed perfectly serviceable dumplings, but it’s worth seeking out Taste of China for first-rate cuisine. Grab the crispy beef with XO sauce, the pork cheek with king oyster mushrooms or the Peking duck with pancakes, and it’ll be crystal clear — or as clear as anything can be at 5 a.m. — why this restaurant has been a Toronto chefs’ hangout since it opened almost 20 years ago. tasteofchinarestaurant.ca.

Related: The absolute best spots in Toronto for breakfast lovers

On the Saturday before Thanksgiving weekend, from the time the sun drops until it comes up again, Toronto is transformed by roughly 100 mesmerizing, multi-sensory and entirely free art installations. Around a million locals and out-of-towners descend on all corners of the city to experience Nuit Blanche, which celebrated its 10th anniversary last October. This year, signature projects include a forest of fabric-strung LED lights twinkling at City Hall; a pool of water where the ripples are generated by brain waves; and a 45-foot globe projected with celestial images and sounds from Director X (of Drake and Rihanna’s “Work” video). Nuit Blanche is a cultural marathon, not a sprint, so start with an extra-large coffee to steady yourself for the long haul. nbto.com.

The east end isn’t exactly known for its late-night haunts — people tend to get up early here to run 10K, then push baby strollers into brunch spots — so Pinkerton’s Snack Bar has been a welcome addition to the hood. Chase Asian-influenced dishes like Szechuan squid and fiery Laotian sirloin tartare with well-crafted classic cocktails like a boulevardier or Paper Plane — and then order another round, because the restaurant stays open till last call at 2 am. With exposed brick walls and industrial pieces salvaged from the nearby Leslie Street Spit — an abandoned breakwater transformed into a five-kilometre bird sanctuary — this is a lovely place to linger before relieving the babysitter. facebook.com/yourpinkertonsnackbar. 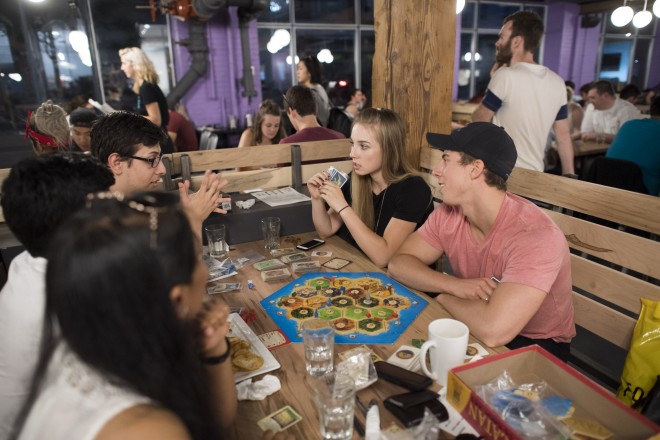 Late-night games at Snakes and Lattes

If you’re feeling retro, Little Italy still has its fair share of classic red-sauce joints, or you could set aside a couple hours for that most traditional of timewasters: the board game. Housed in a sprawling, subterranean space, Snakes and Lattes offers thousands of options, from the massively popular Settlers of Catan to the massively lewd Cards Against Humanity. Staff sling lagers, nachos and flatbreads to keep players well-fueled, and dole out boatloads of recommendations to both neophytes and experts looking for something new. On weeknights, clusters of friends and competitive couples can stay until midnight, and on weekends, the games go on till 2 am. snakesandlattes.com.

Even in a city that boasts “diversity our strength” on its coat of arms, Bloorcourt neighbourhood stands out, with Ethiopian restaurants and roti shops nestled alongside contemporary art galleries, Mexican grocery stores, laid-back watering holes and vegan bakeries. Comedy Bar, which has been kicking around for eight years, took over a former Eritrean pool hall and turned it into a venue for sketch, stand-up, improv and more experimental formats. There are typically two nighttime sets on two stages to choose from, and on the second Monday of each month, Gilmore GirlProv brings your favourites from Stars Hollow back to life. comedybar.ca. 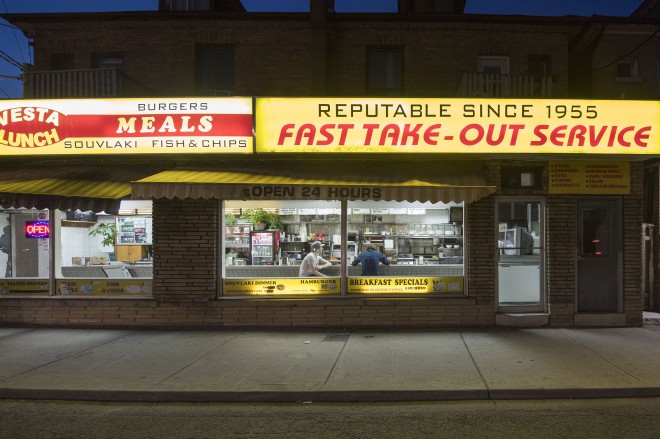 Sometimes, quite unexpectedly, a late night turns into a very late night turns into an it’s-4-o’clock-and-you-absolutely-need-to-eat-now kind of morning. For the past 60-odd years, the narrow counter at Vesta Lunch has been serving up 24-hour breakfasts with the requisite grease and bacon (plus souvlaki sandwiches and entirely decent chicken fingers) to the bleary-eyed and wobbly-legged. 274 Dupont St., no website.

Further south, TIFF stalwart Thompson Hotel has a 24/7 diner that delivers a quality Reuben sandwich, piled high with pastrami, sauerkraut and Swiss cheese and paired with a mess of gigantic onion rings. Bradley Cooper, Kate Hudson, Carey Mulligan and James Franco have all stayed at the hotel during the September film festival, so keep your eyes peeled for someone young and pretty scarfing fries in the corner. thompsondiner.com.

At Leslieville Pumps, a gas station smokehouse in the city’s east end, petrol is available 24 hours a day, so customers keep coming — and they can get hungry. The kitchen officially closes at 9 p.m., but for cabbies, night-shifters and sleepless passersby, staff will dish out chicken curry and rice, plus the occasional (and phenomenal) smoked butter-chicken sandwich. It’s about as well as you can eat at some ungodly hour. leslievillepumps.com.

More:
50 cute and comfortable flats to wear all through fall
4 major cell phone health risks and how to avoid them
How Ryerson University is creating a female-friendly campus bar