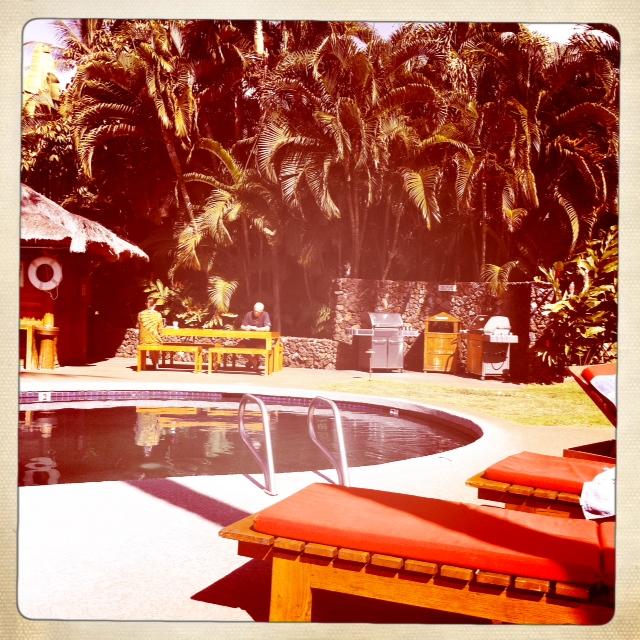 For the jet-lagged and the panic-stricken, I believe Hawaii is the perfect remedy. From the moment we stepped off the plane an intense calm has washed over me. Also, nothing helps you to embrace the aloha spirit like being picked up from the airport in a white stretch limousine “taxi”. I’m not sure why a white limo would be equipped with a meter, but it was pretty exciting so I’m not going to question it further.

We arrived in Lahaina, Maui (after two nights in Honolulu) yesterday and to say this place is mellow would be an understatement. I can understand how this old whaling town has become a hotspot for honeymooners. I’m currently sitting poolside at our hotel surrounded by flowering trees and butterflies and even though there must be 20 people in the loungers around me the only thing I can hear are the birds. Paradise!

The one thing paradise does lack is a nightlife. Instead of dancing on tables at a local bar we welcomed the New Year by guzzling wine and stuffing ourselves beyond belief at a seaside restaurant. Not too shabby actually.

Anyways, because today is the first day of the year I’ve decided it’s a good time to put on paper the travel bucket list I’ve been compiling in my head in the lead up to this trip. So here goes…

1.   Attend an authentic luau and surf Waikiki Beach with the masses. We’ll be surfing while we’re here in Maui as well…the more surfing the better (see number 10).

2.   Sit front row at a sumo match in Tokyo and follow that up with a drunken karaoke performance a la Bill Murray in Lost in Translation (his rendition of Roxy Music’s ‘More Than This’ is beyond words).

3.   Stay in a swank hotel in Hong Kong (several people have told me that the hotels in Hong Kong are some of the best in the world, so I want to see for myself).

4.    Pass my boyfriend Craig off as Ryan Gosling and score some VIP treatment as a result (Craig gets compared to Gosling about every other day. We were actually at an event a few months ago and a girl came up to me and said “you’re living The Notebook every day”.  Amazing.)

5.   Have a luxurious garment made for mere pennies in Hoi An, Vietnam (I’m still scouring fashion mags for inspiration).

6.   Catch and cook my own dinner in Bali (or Fiji or wherever else the opportunity presents itself).

7.   Rent a Winnebago and camp my way up the Australian east coast (I’ve read that you can rent crazy hippie campers for this purpose).

8.   Shack up on a secluded Fijian island

9.   Sail the Central American coastline in a luxury clipper (this is incredibly strange, but I got an email from a fellow writer based in Costa Rica (named Tony!!!) out of the blue a few weeks and he told me I should look into a company called Star Clipper, which offers swanky tall ship cruises. Tony was setting sail in January, but I’m hoping I can do the same trip in April)

10.   Be as active as possible every day to make up for the fact that all I seem to be thinking about is the zillions of delicious local delicacies I want to devour.