How I wound up on The Price is Right

Costumes, new cars, folks from Possum Trot, Kentucky and octogenarians bidding on bass guitars – it’s the recipe for a magical day in L.A. 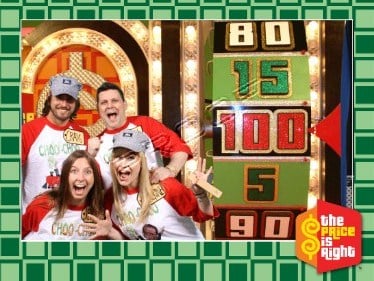 I’ve spent the past week in California hitting some of my favourite spots (Desert Hills Premium Outlets, where I actually ran into a friend from Vancouver – that’s how great this mall is, Katsuya, In-N-Out Burger) with a brief jaunt over the Nevada border to check out Las Vegas for the first time.

My great friends Katie and Guy joined us for this leg of the journey, which made California all the more welcoming even though it was uncharacteristically frigid during our stay.

Anyhow, instead of going on about celeb-spotting over sushi or what I assume was typical Sin City debauchery, I want to tell you about my experience doing something completely out of the ordinary. This is the story of how I ended up on The Price is Right.

I’ve been to L.A. a handful of times before and on more than one of those visits, on my way to go shopping at The Grove (another of my favourite Californian malls), I noticed the hoards of fans lining up outside CBS Studios for a shot at fame and fortune. I never actually thought I’d end up being one of those people.

That’s where Katie and Guy came in. This is the type of couple whose relationship blossomed at a water park in Quebec (I was there), who spent their first summer together traveling around visiting North American oddities (I still treasure my postcard from Scarecrow Village) and who maintain a hearty collection of snow globes to commemorate each journey they’ve taken together. Anyways, trying our luck as game show contestants was their idea and Craig and I thought it might be ironic to win a second trip around the world from Drew Carey. So that was that.

While we were exploring Australia in a campervan, Guy was at home in Toronto working on strategy and costumes. Upon arrival in Los Angeles we were presented with our team t-shirts, which read “Choo choo choose me” on the front and pictured a cash-waving Drew Carey perched inside a money train. On the back were our faces, each inside its own train car adorned with a maple leaf.

The strategy was this: wear a creative outfit to stand out from the crowd, flaunt the fact that you’re Canadian (usually one Canuck is picked, along with at least one elderly person and one individual in military garb), then act as excited as possible for as long as humanly possible so that you’ll get noticed by the producers. 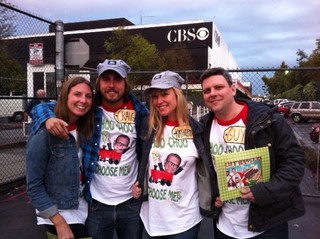 With, basically, a one in 200 (or so) chance of winning “A NEEEWWWW CAR” we were pretty jazzed as we arrived at the studio to line up at 5:30am (there were people who had been there cuddled up in Snuggies since 9pm the previous night). We grabbed our “order of appearance” tickets and were told to return for the second taping at noon.

Returning to CBS that afternoon I noticed that our costumes had some competition. One middle-aged couple showed up in matching fluorescent green t-shirts that read “All the way from Possum Trot, Kentucky”, another man wore a shirt that said “Pick me! I’m poor!” and a whole slew of folks showed up declaring (on their attire) that their pets had been spayed and neutered.

After being photographed several times we were sent to be interviewed in groups by the producers, who asked us where we were from and what we did for a living. At that point I was pretty sure I had a shot at Contestants’ Row – nothing gets a laugh like “I quit my job to travel the world”.

After the interviews we were sent to a holding area to watch a slew of past episodes, which is actually pretty exciting when you’re about to see it all go down first-hand. We hooted and hollered as the on-screen contestants won jet skis and trailers, vacuums and barbecues. An hour passed. Then another. By about 4pm the 200 or so people in the holding area started to lose it, chanting “LET US IN! LET US IN!” And I admit, with no food in sight and having eaten only a bagel since my 5am wake-up call, I almost cried when a woman sitting across from me pulled out a Ziploc bag of fried chicken. A note: If you ever consider appearing on a game show, make sure you bring a picnic for the wait.

By about 5pm we were finally ushered into the studio and shown to our seats. It turns out that all of Guy’s hard work on our clever shirts paid off because we were seated in the very first row of the audience, right behind the podiums where the lucky few place their bids.

Surrounded by all the tacky glory of the psychedelic set (which is actually a lot smaller than I imagined) my energy was restored and the four of us screamed, shouted, danced and high-fived the rest of the day away on camera.

I wasn’t called up on stage, but that’s probably a good thing. We were encouraged to yell out bids to the contestants and apparently the only things I’m capable of guessing the actual retail prices of are fish fingers and lint rollers. That and I’m pretty sure my sleep-deprived howling mug got more than enough air time seated in the front row.

Celebrity aside, I think the neatest part of appearing on a game show is the camaraderie. It’s amazing how exciting it is to see a complete stranger win something. Anything really. And don’t even get me started on watching 82-year-old Josephine who, on her 20th trip to see The Price is Right, wound up on Contestants’ Row bidding on a bass guitar, then danced her way through each commercial break. Pure magic.

I would have never have woken up in the ungodly predawn to do something like this ordinarily, but that’s the great part about traveling: You have the freedom to accept even the most seemingly-ridiculous invitations and the time to indulge in them. And, of course, without those enthusiastic, costume-making, snow globe-collecting people in my life I would have probably just slept in and gone shopping as usual.

You can watch me lose my mind as contestants “come on down” on April 13th. Trust me, it’s worth it just for Josephine.