If Newfoundland is the Rock, then Fogo Island is a pebble, a 25-km-long island that sits off its east coast. Getting there requires a flight into Gander, an hour-long drive to Farewell and then a 45-minute ferry. Being there takes your breath away. The roadsides are populated with lush forests, flat ponds, soft green caribou moss and a riot of wildflowers. Every wave the ocean pulls back into her arms at Oliver’s Cove creates a musical, mumbling sound as the stones get tumbled in the current. Trails are part moonscape with 400-million-year-old rocks and part verdant patchwork quilt with thick, springy moss punctuated by purple wild asters, blue flag irises and bright-red pitcher plants. Scattered across them you’ll find deep red partridgeberries, scarlet marshberries, perfect blueberries and juniper berries that look like black pearls. There are puffins, caribou, icebergs and riddle fences. It is, as one visitor recently said to Zita, “frickin’ Narnia.”

Along the island’s edges sit the communities: simple, brightly coloured houses plopped together in a way that made sense before there were roads. The abundant flakes (large, flat surfaces where the cod is laid out to dry), sheds and stores highlight that this is an island built on fishing. For 400 years, the people of Fogo Island pulled their wooden boats out to sea, bringing home their catch of cod to be cleaned and salted, then stored or sold. In the ’60s, though, factory trawlers from the Soviet Union, Spain, France and Portugal plundered the sea until cod was on the brink of extinction. We all know from our history classes what happened next: In 1992, the government issued a moratorium on cod fishing. “Rex Murphy implied the collapse of the cod fishery was an arrow in the heart of outport Newfoundland,” says Zita. “Yes, it was a grievous wound, but we’re not dead yet. We’re still here.”

The only girl in a family of seven, Zita grew up in Joe Batt’s Arm, one of the larger outport communities on the island, helping to salt cod in a house with no electricity. She moved to Ottawa for university (“I spent the first month playing with the light switches”) and made it big as CFO of a publicly traded company. When she cashed out her stock options in 2002, she had a reported $69 million to her name. For four years, she sailed the world, until she received a call from Fogo Island that her house (left to her by her beloved Uncle Art) was in disrepair, and she needed to fix it up. “That was the first step in coming home,” she says. “And lingering was the next.” 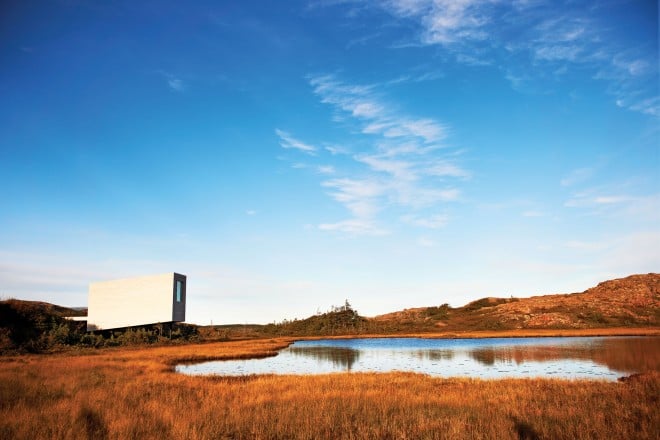 A scholarship program seemed like a logical place to start her philanthropy, but when a local woman pointed out she was “paying our children to leave,” Zita started asking questions: How can we make them stay? How can we add another leg to the local economy to give it more stability? How can we generate the highest possible revenue with the lowest possible environmental impact?

Along with her brothers Tony and Alan, Zita created the Shorefast Foundation, eventually developing four initiatives for the island and securing investments from both the federal and provincial governments. First, a micro-lending program to help locals start up their own businesses. Next, a nod to the past by resurrecting the building of traditional punts, a type of wooden boat.

The third arm was the creation of the Fogo Island Arts Program that began with Gander-born architect Todd Saunders designing six unique studios (four are currently built) to be dropped around the island. Artists from all mediums and from all over the world come to work in the studios, but Zita is fiercely opposed to the word colony. “It’s not artists in little separate groups. They don’t live in the studios—they work their and live in restored fisherman’s houses within the community. There is a learning back and forth, people getting tangled up with each other.” These conversations are crucial, she says, to the future of the island. “Art’s very nature is to poke and to try to understand things. Art pushes back. It builds community capacity to think critically.” 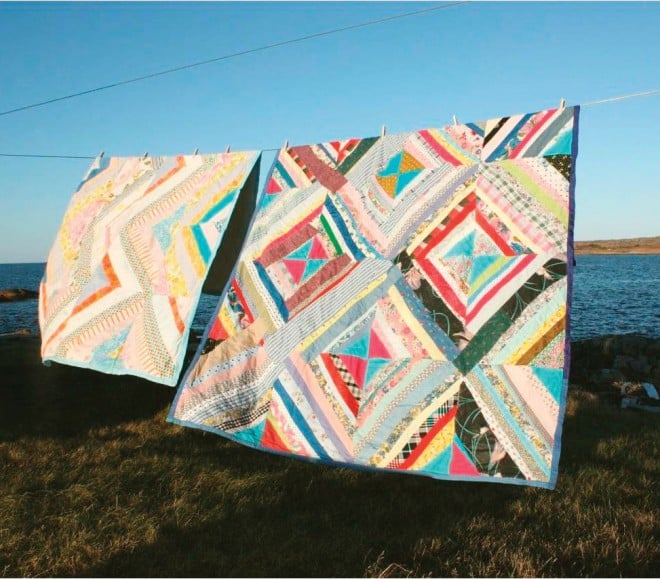 And, finally, there is the Fogo Island Inn, designed by Saunders and scheduled for a soft opening before the end of 2012. The 29-room inn in Joe Batt’s Arm will directly employ at least 70 people—a huge impact in a community of only 1,028—and the hoped-for ripple effect will far exceed that. The women who created the quilts that will be in every room, for example, are poised to keep up with demand should guests wish to return home with one of their very own. And the fabulous oversized rocking chair in your room that you sat on to watch the whales? It was made by a local craftsman. Guest programs will include activities such as berry picking and jam making, cod catching with a local fisherman, or taking a walk with an artist up to see the island through their eyes.

Every last detail in the inn is a tribute to the beauty, warmth and humour of the province. Some rooms contain wood-burning stoves and windowsills built for leaning out to watch the sea. Some chairs were inspired by the curved sides of traditional punts. Wallpaper patterns host whimsical line drawings of saltbox houses, gulls and buoys on a soft robin’s egg blue background. Music played in the lobby will be reflective of sounds found across the island. 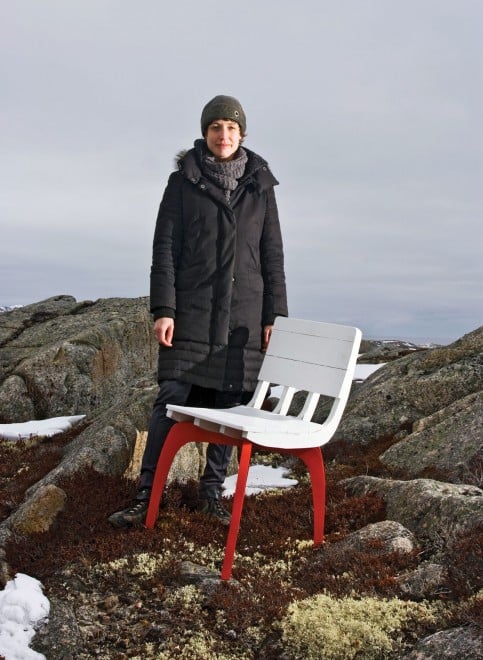 The furnishings are top of the line but never over the top. The key word is luxury, not opulence. The glasses, for example, may be ordered from Riedel, but, says Zita, if she could, she would remove their tiny labels. “I don’t want any brands in your face. But they are perfect glasses.”

When it came to the colours to be used both inside and out, locals were polled on their favourites. Brown, grey and silver, said the women. Aqua, pink and orange, said the men. Zita was surprised, until she realized that those were the colours each would see every day: The men out on the sea in the early mornings, and the women at home tending to the fish.

The kitchen is being helmed by Murray McDonald, a young Newfoundlander, who was handed the job of training 15 recruits—all from the island, none with a lick of kitchen experience. “Hand them a cod, and they know exactly what to do,” McDonald says. “But other than that…” He is optimistic, though, about their future and their ability to adapt to their new chosen industry.

Zita’s commitment to the environment means that solar panels will augment the building’s electricity to serve other purposes like heating water. “And nothing in this building comes from places where people don’t have the protection of labour laws or that don’t have basic environmental codes,” she says. “When the time came to buy the nails, we thought we’d have to shut down. We couldn’t find any that came from places we were willing to buy from.” finally, they found nails that were made of wire from Finland, and hammers were raised.

The low-impact vow explains why Zita opted for such luxury: The fewer people they bring to the island, the better, really. “Everyone knows that tourism is a dance with the devil,” she says. “The question is, How do you do it in a way that you can have the dance and not go to hell? If we started a budget tourism business, it would kill us. It would be very bad for the visitors, because we couldn’t give them the love they deserve. And these beautiful little lichens can handle only so many feet walking on them.”

Still, Zita doesn’t want the inn to be shouldered with the label “resort”—it’s a word that carries with it an us-versus-them mentality, with its implications of a stark division of guests and locals. “The inn is a public space with private guest rooms,” she says. Everything on the first floor—the library, the art gallery, the cinema—is open for local residents to explore. Nor does she want to create a theme park. “We’re not manufacturing anything. We’re releasing what is already there.”

Once the inn starts making a profit, the real change happens: Every single penny goes back into the community. It will be operated as a business with a board of trustees (weighted toward locals) who will decide what best to do with the funds. First up, Zita suspects, will be building a pool. “We don’t swim!” says Zita of her fellow islanders, aware of the irony of living by the sea and not dipping in it. “I sailed the Atlantic Ocean and I can’t swim!”

The plan has its detractors, of course—in my short time there, I heard complaints that ranged from critical (“The architecture is too modern”) to practical (“The ferry lines are becoming too long”) to bizarre (“There are no bathrooms on the wilderness trails”). Zita hears them all, too, regularly getting buttonholed every time she leaves Uncle Art’s house, where she lives year-round. “I love it,” she says, of the feedback. “Every single conversation starts of with ‘Now if I were you….”

Her years in business have readied her for the challenges inevitable in a project this enormous and uncharted. “I learned from my dad that people like to think that life is easier than it is. Or that it’s simpler than it is. We’re always looking for the shortcut—how can you get done and heave off to the couch. But every time you do that, you end up in mediocrity, and that’s a bad place to be. If life is anything it’s this act of balance. The rhythm of opposites. It’s not about buts—its about ands.” 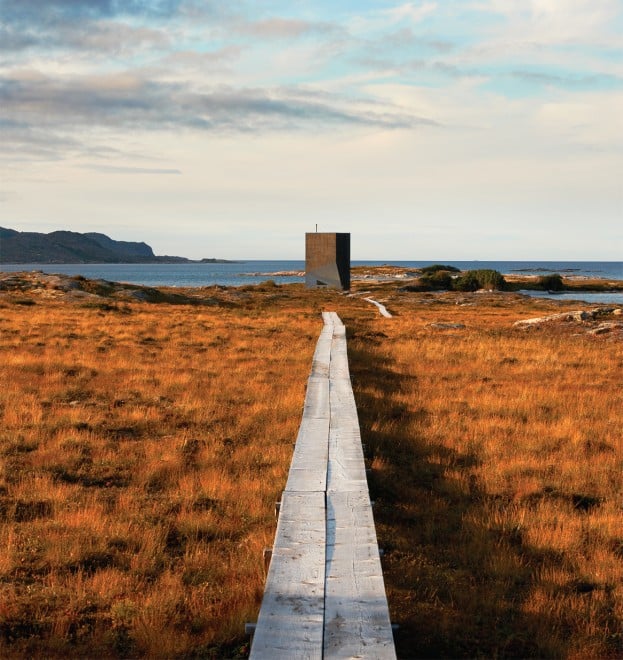