Alanna Glassman’s voluntourism adventure in Guatemala gave her much more than a souvenir postcard. 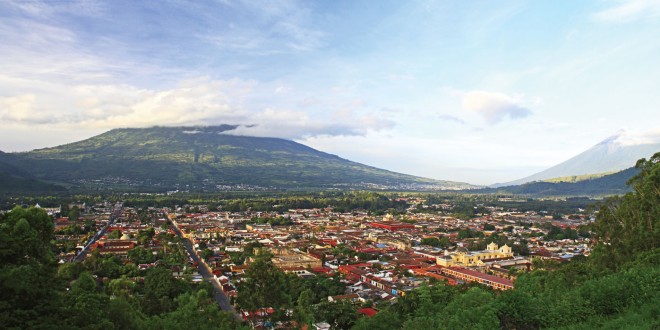 Volcán de Agua (Volcano of Water), one of 22 volcanoes in Guatemala, forms the backdrop to the city of Antigua. Photo, Shaun Veltkamp.

I’ve never been to a developing country; my passport is sparsely stamped with imprints from places where tap water is drinkable, roads uniformly paved and dogs leashed. So I have no idea what to expect when the plane touches down in Guatemala City. I heave on my backpack and head toward border control, patrolled by men with guns on their backs. I explain that I’m here to help build a “children’s village.”

The next thing I know, I’m in a bus barrelling down a twisting highway toward Guatemala’s old capital city, Antigua, with a group of like-minded travellers. Stray dogs dodge cars; a man beside us rides a motorbike with a toddler on his lap and a woman at the back; no one wears helmets.

We spend our first day walking Antigua’s cobble­stone streets, taking in Spanish baroque architecture and eating tortilla soup at the 16th-century Café Condesa. Then it’s onward to grittier Tecpán, a Mayan city near our building site, with dirt roads and a vigilante justice system because there are few police.

Guatemala is a country of contrast. The culture is rich; the people aren’t. Pulling into Tecpán feels like a sock to the gut. On the doorstep of cozy Casa de los Abuelos, our lodge, bony goats and cows are tethered to rotting fences. Smoke from unseen fires swirls into the thin mountain air, carrying the faint scent of corn tortillas. We’re told entire families live in a single room held together with wood and tin. 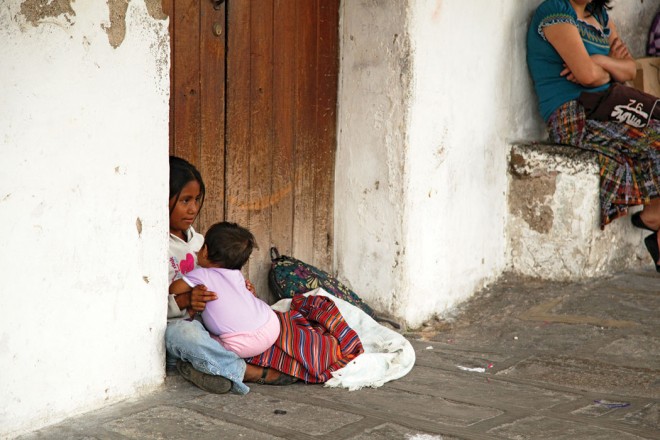 This experience lends a whole new dimension to travel. Voluntourism is a cultural exchange that’s great for the soul, but not in the style of Eat, Pray, Love. This isn’t self-indulgent; it’s a chance to test your strength, to get a little scared doing something new and to see your efforts take shape in a very real way.

Some of the people putting the art of giving on the map are Vancouverites Aaron Smith, creator of GoVoluntouring, and Jane Reitsma of Stratosphere International. They’re leading the trend of travelling to far-flung countries on what they call “holidays for humanity.” Their businesses are non-profit.

Aaron Smith and Jane Reitsma work closely with Canadians Heather Knox and Greg Kemp, the creators of Project Somos Children’s Village. By 2016, this 145-acre plot will be transformed into a haven of 12 self-sufficient homes, as part of their orphan-prevention program. Each will house widowed and single mothers who are at risk of losing their children. UNICEF identifies these children as “orphans” as they are the most vulnerable members of society in developing countries. The stats in Guatemala are shocking: In 2008, a child was abandoned every four days in Guatemala City; there are about 370,000 in need of placement throughout the country, most born to parents too poor to cope. This sanctuary will include an organic garden and several cisterns for collecting rainwater; and there will be a community hall and education opportunities.

After a breakfast of bananas and mosh (Guatemalan oatmeal), we arrive at the project site, 2,133 m above sea level. The crowns of seven volcanoes frame the view. Agua and Acatenango aren’t as active as Fuego, which puffs plumes of white smoke almost every 15 minutes.

On our tour, we see volunteers from another group levelling ground for an outdoor seating area. We learn how sustainability takes precedence at Somos: Earth bags, which are filled with a mix of earth, sand and cement, reinforce homes; bamboo posts support interior walls of eco-bricks. The bricks are actually soda bottles stuffed with one pound each of clean plastic garbage. Stacked side by side between chicken wire, these eco-bricked walls are then plastered with mud and painted in brilliant adobe reds, turquoises, yellows and cobalt blues. The walls in each home remove a staggering 7,000 pounds of garbage from local streets. They also represent hundreds of hands working together. “When children fill the village with laughter, they’ll know many people loved them without ever knowing them,” says Heather. 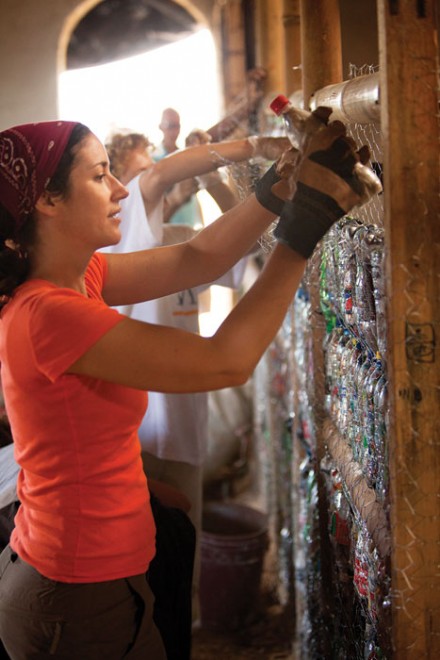 We begin sorting hundreds of eco-bricks, instructed by local builder Ruben, who is in his early 20s. We don’t share a language, but we find ways to communicate with our hands: Coke bottles in one pile, Agua Pura in another and Gatorade into the wheelbarrow. Ruben is patient with my rookie sorting skills. It feels good to get to work. We slot eco-bricks into bamboo frames. I tuck a note inside one: “May this house always be filled with light, laughter and love.”

Most of the volunteers on the trip are Canadians, some travelling in families, others on their own, ranging in age from 15 to late 50s. By day three, it’s amazing how quickly we’ve all bonded, laughing as we secure bits of wire. Heather witnesses this all the time. “Volunteer work builds great connections between people,” she says. It’s part of the feel-good factor: Most people here have never done anything like this — but we’re all in it together.

Heather is a person you want to hug and never let go because you hope maybe her genuine goodness might rub off a little. Before I go to sleep, I recall my favourite memory from the day: Heather working with her husband to hang wind chimes on a half-built house where she’d already pressed colourful beads into the adobe doorway. I asked her why. “It’s important to make everything as beautiful as possible,” she says. “We’ll be healing deep scars here; we want every aspect of this village to be filled with love.”

Between workdays, we take a day trip to the Mayan ruins of Iximché, the former capital of the Kaqchikel Empire before the Spanish came in the 1500s. We walk among awe-inspiring pyramid temples and a ball court overgrown with grass tussocks.

On our last day, we visit Chichicastenango, one of the largest markets in Central America. The bazaar is buzzing. Girls in vibrant huipiles (dresses with intricately embroidered patterns representative of their hometowns) click-clack in little heels, hawking hand-woven textiles. Elderly women hunch over pans of bubbling stew, and the heat rises from stalls overflowing with ceramics and spices. 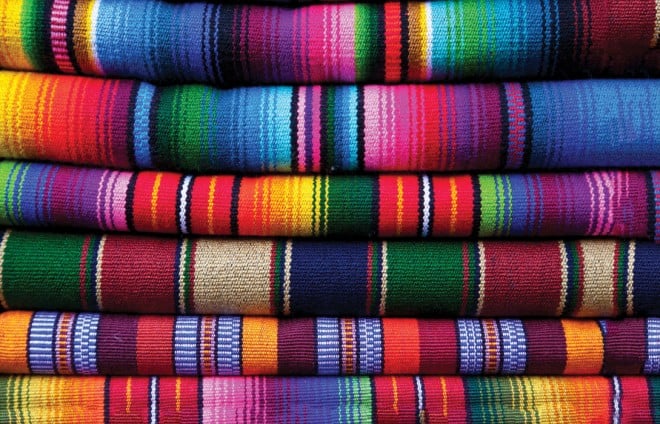 We barter until we run out of quetzals (Guatemala’s currency), then we head to Panajachel, a town that predates Columbus, to feast on fiery chicken fajitas and ice-cold Gallo beer, serenaded by a hipster guitarist plucking Carlos Santana songs. Singing along, I realize I’m no longer outside my comfort zone. How heartening to know people like me can make a difference, even if it’s for just a week out of a year.

Update: In April 2014 the village welcomed its first two families: Ana and her four children (ages eight, six, five and two), who’d been living in an animal pen, and Marta and her three children (a four-year-old and 15-month-old twins). 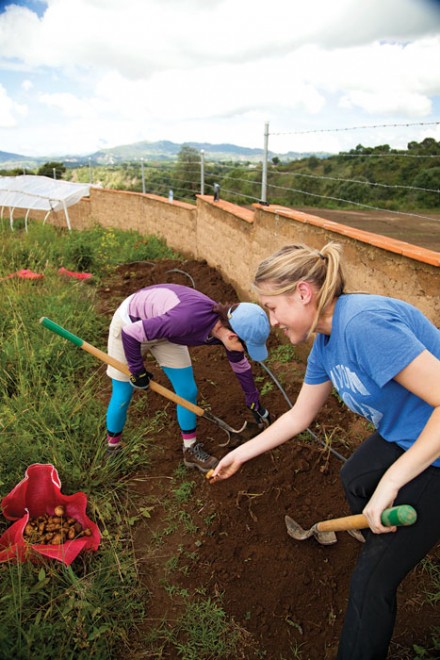 Our writer, Alanna Glassman (in blue), sifts through volcanic soil for potatoes with a fellow volunteer.

Plan your trip: Getting there

Fly to Guatemala City, where you’ll be driven to the base camp in Antigua. GoVoluntouring is operatedby Flight Centre and oversees thousands of projects like this one around the world. Project Somos works with Stratosphere International; it’s $1,240 for a 10-night trip, room and board included, with 32 percent of proceeds directed to the project.

Questions to ask your voluntour company

What difference have you made and what is the evidence to show it? Where does my money go? What is my actual impact going to be? Is the local community involved in the project?