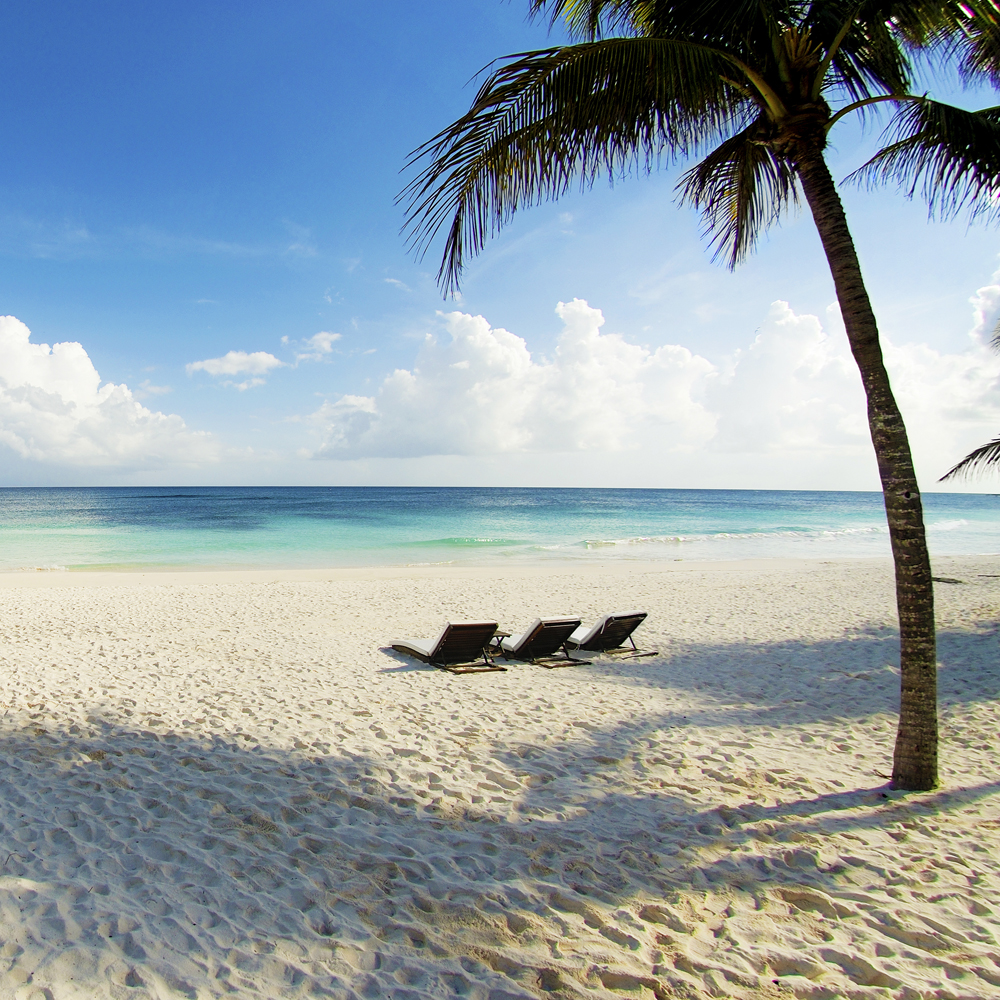 The last time I was in Tulum it was a stumbled-upon place. A forgotten spit of powder-white sand with startling blue Caribbean water at the end of a crumbling road littered with tope, (which translates as bumps, but they were more like skate ramps). Occasionally we’d pass a tiny hamlet of wooden shacks with chickens pecking at the dirt. That was 20 years ago and I was dreading my return. Tulum has been discovered and, along with Goa and Formentera, has become the fashion pack’s favourite hippy getaway. Written up in 2012 in the New York Times Style section, Tulum has been the place of numerous sightings of people like Jade Jagger, Sienna Miller, Mario Testino and Sean Combs. Yet when I was invited back, I couldn’t resist the pull. 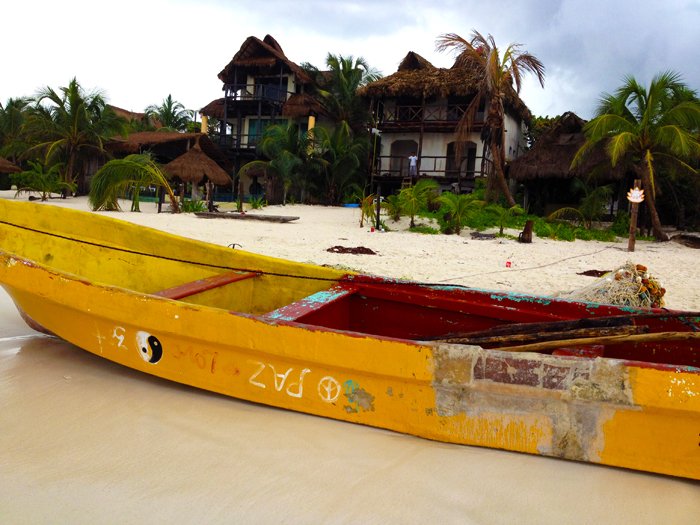 My heart sank as we swept down the sleek four-lane highway that now links pulsating, tacky Cancun to Tulum. The Yucatan I remembered had been subsumed by vast all-inclusive resorts and the surrounding jungle tamed into scraggy patches of lawn. But then we turned off the highway and found ourselves on a windy, narrow road with palm, papaya and alamo trees arching over it and huge electric-blue morpho butterflies flitting through the dappled sunlight. I was there with Mr & Mrs Smith, whose website is dedicated to finding boutique hotels across the globe, and they were going to show us the other side of the Yucatan. As we walked into the lobby of our hotel, Las Ranitas, I relaxed. The palapa-topped space soared two stories high, and was open on all sides. Birds flew in and out; the sound of the waves created a lulling soundtrack and beyond it I could see the white sand, creamy surf and haphazard palm trees I remembered. There were no high-rise hotels or oontz oontz beats of house music to ruin it. I followed a stone path inset with pretty, decorative pebbles to my room on the second storey of a white-washed house (I’d always recommend being up high in the Yucatan; you get more breezes and fewer mosquitos). It was topped by another palapa roof, a lovely balcony with criss-crossed wooden railings and a bed so vast I could sleep horizontally if I wanted. 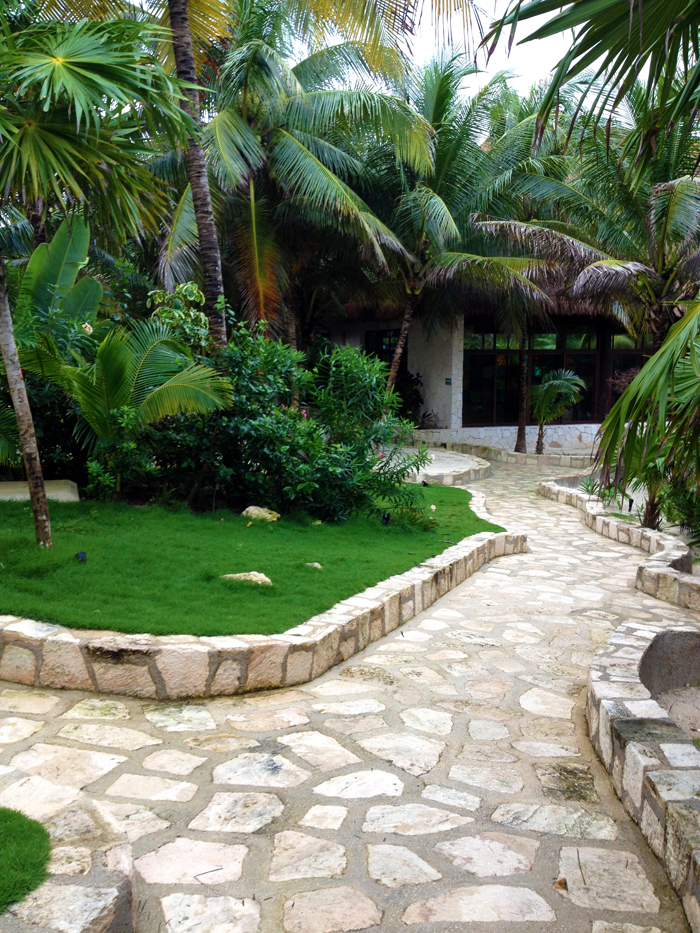 Las Ranitas is at the less touristy southern end of the beach, which has been colonized by fashionable ex-pats who have traded in their stilettos for Havaianas. The boho-chic counter culture is strong here; there are yoga retreats, juice cleanses and everything is eco-conscious and locally sourced. There are two meccas: Hartwood restaurant, whose handsome bearded chef, Eric Werner, appeared on the cover of the hip publication, Edible Selby. Werner cooked at Peasant in Manhattan before skipping town to create his restaurant in beach-bum paradise. Open to the jungle, and using only local ingredients (corn ice cream, anyone?) Hartwood  literally hauls its catch of the day out of the water and carries across the beach to the kitchen. Tastefully curated boutiques, such as Josa Tulum and sandy-floored cafés make up this style-centric section of beach. At its epicentre is the other fash-pack magnet, Coqui Coqui Tulum hotel; the spare, polished-concrete interiors with dark teak accents were created by Italian designer Francesca Bonato and her husband, Nicolas Malleville, an Argentine model for Burberry and Gucci and an architect. Their arrival more than a decade ago brought an international network of beautiful people. They have now moved inland to open two more Coqui Coqui hotels, one in the exquisite colonial town of Merida and another next to the Mayan ruins at Coba, which was the next stop. 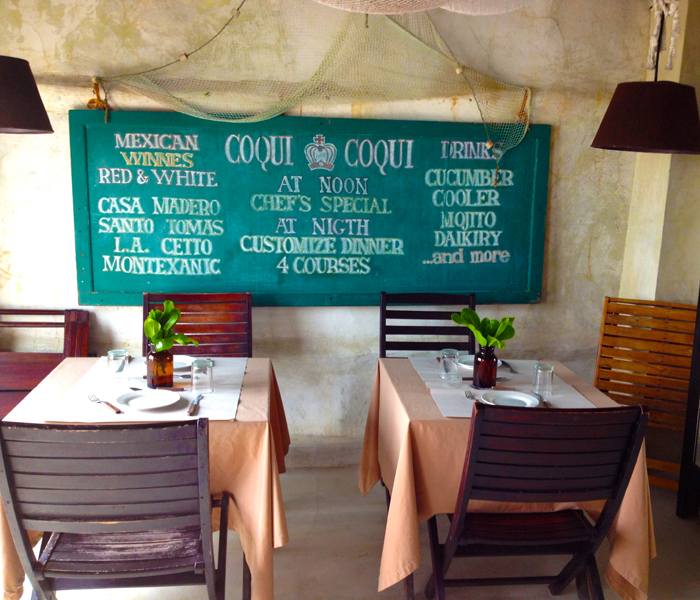 The place to see and be seen, Coqui Coqui Tulum – the people watching is fab and they make the best latte on the beach. Photo, Antonia Whyatt. 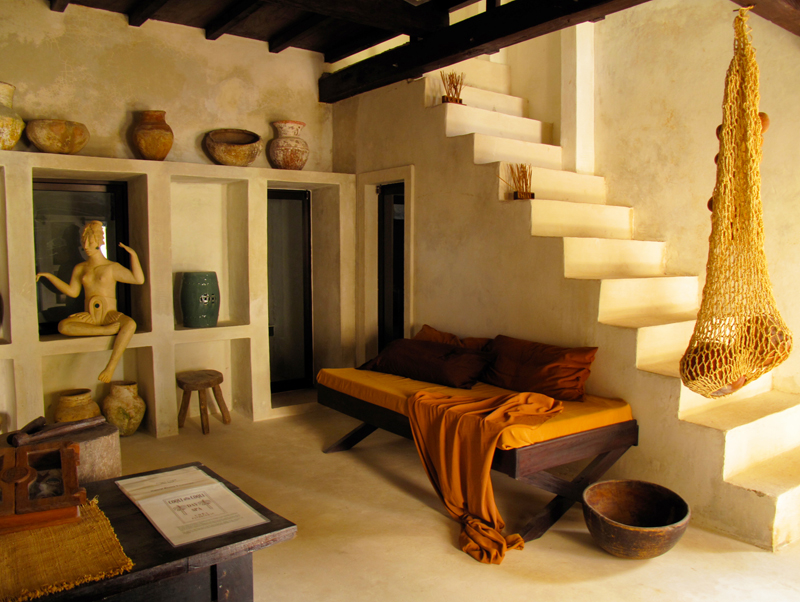 The stairs lead up to a library stocked with rare and unusual books. Photo, Mr and Mrs Smith.

Nothing had prepared me for the romance and mystery of Coqui Coqui Coba. An hour’s drive inland from Tulum, it is down a dirt road on the edge of a lake. It feels less like a hotel and more like a Mayan ruin you’ve just stumbled across. The hotel’s two buildings are made out of rough-hewn limestone blocks that step up like pyramids to the sky. The rooms at the top of the two pyramids (there are only five in all), are connected by a rope bridge with vines trailing off it, like something out of an  Indiana Jones movie. At night the stairs and courtyard are lit by flaming lanterns, and you half expect an Aztec god to appear at the top of them. The interiors are pure film-set colonial fantasy. Whirring ceiling fans, mosquito nets and botanical prints line the walls. The air is headily perfumed with the scent of orange blossom — Coqui Coqui is also a perfumery — and their oils, candles and room sprays are inspired by the lush, tropical surrounds of the Yucatan. 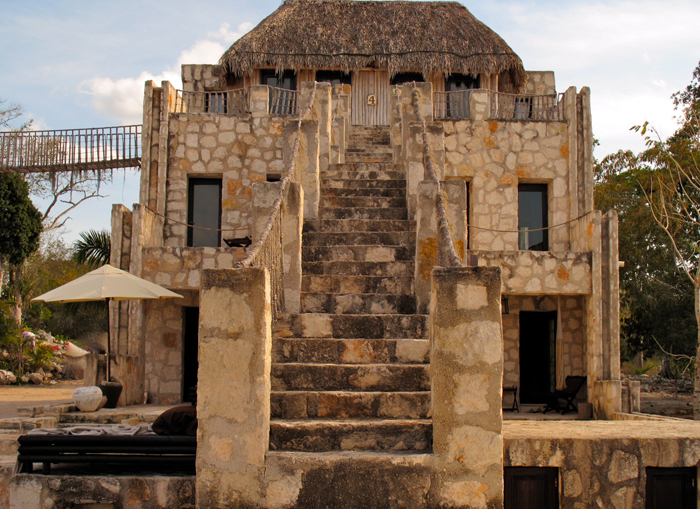 The striking outdoor staircase leads up to room 4 and deliberately echoes the Mayan ruins nearby. Photo, Mr and Mrs Smith.

The next morning I am woken up by the birds as they swoop and call across the lake, teasing the crocodiles, whose ridged backs occasionally, menacingly, break the surface. Brilliant yellow butterflies dance in the sunbeams, 20 at a time; geckos scale the walls, and brightly coloured flycatchers flash across the courtyard. I take advantage of the early start and walk to the Mayan ruins at Coba ahead of the tourists and the heat. The couple who look after the hotel tell me to rent a bike to navigate the distances between the pyramids. It’s brilliant; whizzing through the jungle from temple to temple is absurdly fun and gives me an excuse not to climb the absurdly steep stairs of the main pyramid — my cardio’s already taken care of. 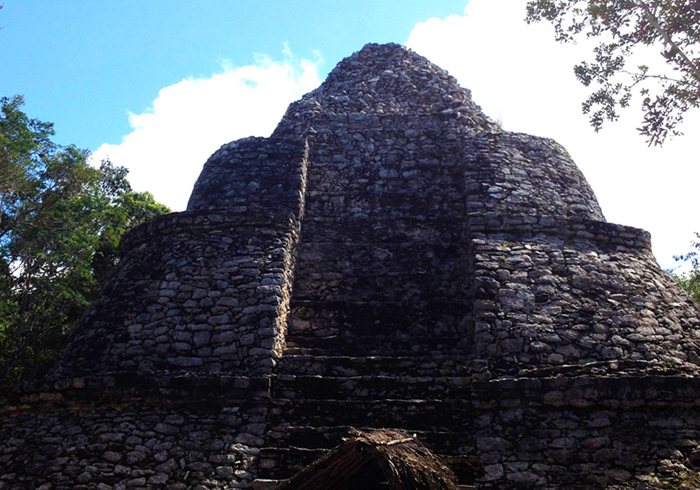 One of the magnificent pyramids that make up the sprawling Mayan site of Coba. Photo, Antonia Whyatt.