Inhabited by devout Muslims but frequented by scantily clad foreigners, I’m not sure what to make of Lombok’s Gili Trawangan 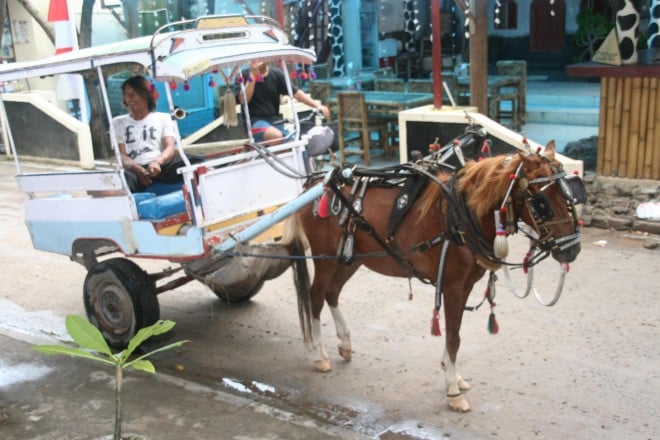 Gili Trawangan, one of three Gili Islands off the coast of Lombok, Indonesia, is a strange place to be. It’s a place where you awaken at the crack of dawn to a mullah’s call to prayer and fall asleep to the sound of techno beats. It’s a place where the locals wear hijabs and the tourists are clad in skimpy bikinis; where the only mode of transportation is a horse-drawn carriage, but where the locals sit under trees sending their friends instant messages on their Blackberrys. It’s the Promised Land for partiers (magic mushrooms are legal and widely available at most bars) but I’m not sure it’s paradise for the people who actually live here. I’m having trouble figuring out whether I should love this place for its contrasts or hate the fact that tourism has clearly changed it so much.

We arrived on Gili Trawangan after a disappointing stay in Nusa Lembongan, one of Bali’s neighbouring islands. I read an article in Vice years ago about garbage eddies floating in the middle of the ocean and I’m quite certain I saw a few enroute to this tiny island. Nusa Lembongan itself is a pretty place, but finding an area of refuse-free beach to relax on is nearly impossible so we decided to head east towards Lombok’s Gili Islands. 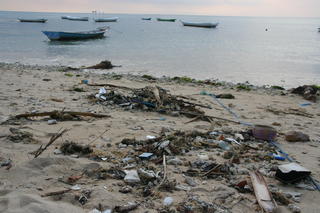 Our first night on Gili Trawangan we were lured into a beach bar by its sheer strangeness. Plastic eagles and dinosaurs dangled from the tree tops surrounding this tiny place and mushrooms were on the menu. We immediately became friendly with the owner Ding Dong (no, really, that was his name) who told us that he spent many years living in the tree under which his bar is now erected. He moved to the Gilis alone from Lombok when he was 14 and was taken in by a stranger. When tourists started to frequent the island he said he was eager to learn how to communicate with them so everyday he’d head down to the beach and try to learn three new words. He’d also gather up menus from the island’s restaurants and study them, teaching himself how to read. He said he spent many years addicted to drugs but the dream of owning a bar where he could chat with tourists helped sort him out. 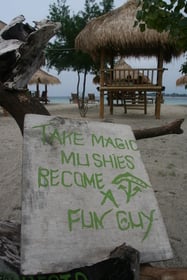 So for Ding Dong, I guess things have worked out. Actually most young people on the island are extremely welcoming to foreigners, but on occasion you’ll pass by a local in their 80s who will give you a look that borders on contempt….but maybe I’m just reading too much into this.

All in all I’m glad to have experienced the Gilis. Unlike Nusa Lembongan, the environment is top of mind here. Local kids clean the beach at the end of each day (the beach was actually the source of many of Ding Dong’s bar decorations) and there’s even a turtle conservation project in the middle of town where you can see hatchlings develop before they are released back into the ocean.

There’s malaria, Jersey Shore cast look-alikes and scorpions (I actually discovered one with my headlamp after the power went out last night, but thankfully Craig took care of it), but it is also a great place to hit a clean secluded beach and get away from it all.

And if you’re really lucky you’ll meet a tree-dweller-turned-business-owner like Ding Dong who can give you some perspective on the positive impact that tourism can have on a remote village even if, at first glance, it doesn’t appear to be so.