This city, formerly known best for its politics, now hosts blockbuster art shows and has hip boutique hotels. It's also turning into one of North America’s great foodie destinations, thanks to the 1,200 farms within its limits 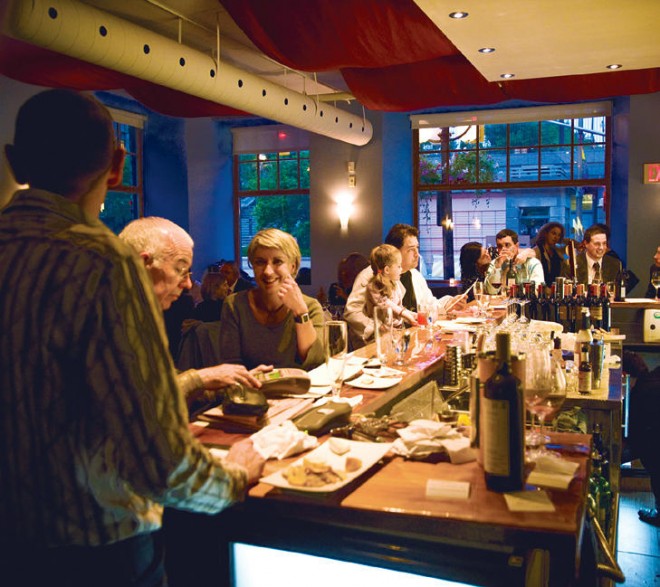 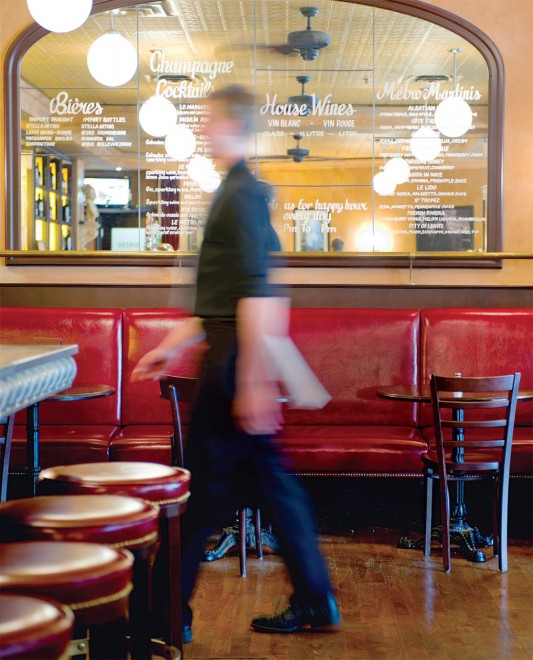 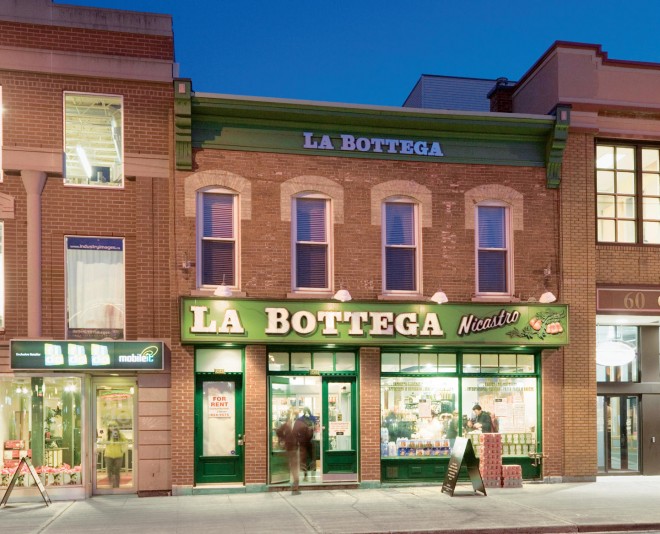 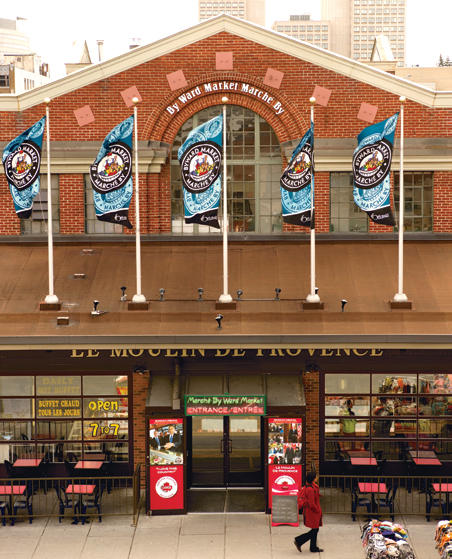 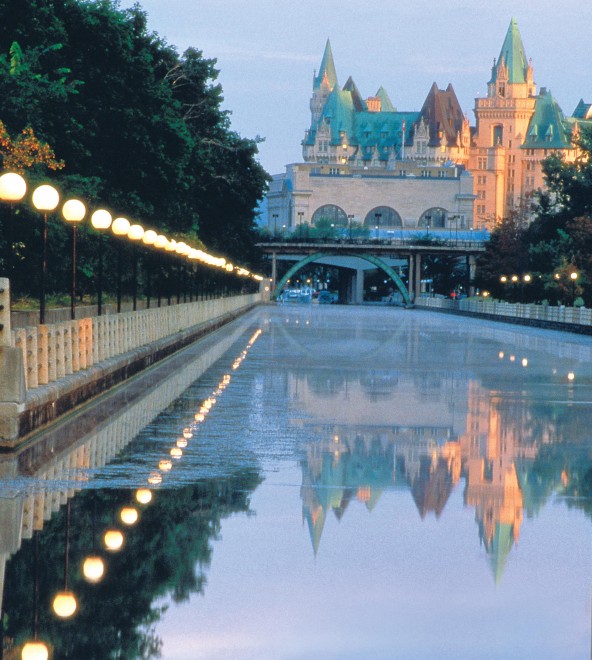 These days, Ottawa is all laid-back, unpretentious cool. Last year it beat out more predictable destinations like New York, Los Angeles and Toronto to be the only North American stop on the tour of Pop Life, the Tate Modern’s three-decade-spanning celebration of pop art; and since June, the National Gallery has played host to another exclusive exhibit that wraps up this month, Caravaggio and His Followers in Rome, a major retrospective of the master painter’s work.

Even better, epicurious locals celebrating the city’s agricultural roots have Bytown rubbing shoulders with San Francisco and Vancouver on our list of top foodie cities. For proof, take a quick stroll through the oldest neighbourhood in the city and what’s become foodie central, the ByWard Market. This revitalized ’hood is covered with quirky, independent gourmet-food stores, fruit and vegetable stands, bakery-cafés and sassy wine bars. Not to mention the rise of a newly sophisticated restaurant scene, a recent development that has happened in no small part thanks to the ambitious grads of Canada’s only Le Cordon Bleu Culinary Arts Institute. And consider this: Ottawa is a “farm city,” boasting a remarkable 1,267 farms, all housed within city limits. This unique urban-rural mix makes it an ideal destination to experience farm-to-fork eating, country day trips, independent retail shopping and historical architecture.

Maybe you can’t ignore Parliament Hill, but it’s clearly no longer the only reason to visit. 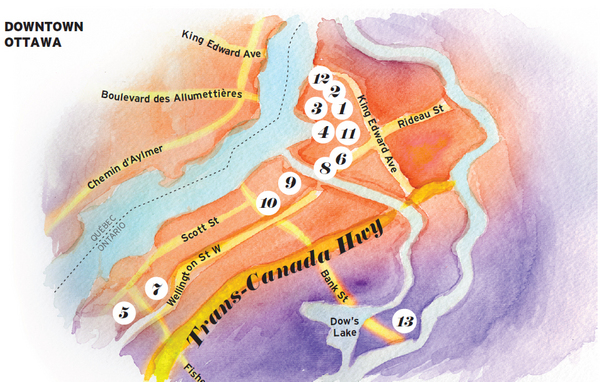 Dining out
1. ByWard Market may be the place to shop for fresh and artisanal food, but it’s also a stellar restaurant district. The main thoroughfare, Murray Street (nicknamed Gastro Alley), is a hub of restos offering fusion and regional fare.

Five o’clocktails
5. Located in the upscale Westboro neighbourhood, Wellington Gastropub has the best features of a “local” — cozy ambience and plenty of regulars — only with craft beers, quality wines and an upscale menu. 1325 Wellington St. W., 613-729-1315.

6. Mostly populated by the Hill’s power players (perhaps why it’s open from 8 a.m. to 1 a.m. on weekdays), French-style bistro Metropolitain Brasserie is the best place to catch a glimpse of political movers and shakers capping off a long day with oysters and bevvies—and to indulge yourself, of course. Its crispy pommes frites are served with garlic aioli and are utterly addictive. 700 Sussex Dr., 613-562-1160.

7. Or try some of the signature drinks at Absinthe. The café stocks a variety of absinthes (including the only genuine one made in Canada, Taboo from Vernon, B.C.) and serves up 13 different cocktails made with the notorious spirit. A little Death in the Afternoon, anyone? 1208 Wellington St. W., 613-761-1138.

Checking in
8. Right next door to Parliament Hill, the Fairmont Château Laurier makes an ideal home base. A perfect reproduction of a French Renaissance château, the hotel is all high ceilings and marble floors with a gorgeous limestone facade. Craving the royal treatment? Be sure to stay in a turret room. 1 Rideau St., 1-866-540-4410. Fairmont Gold rooms from $329.

10. Staying at ARC The.Hotel, a luxe boutique hotel in the city’s downtown core, is all about the amenities: Its gorgeously appointed 112 rooms are outfitted with Frette robes, Egyptian linens and mohair throws. 140 Slater St., 613- 238-2888. Rooms from $139.

Hit the shops
11. The House of Cheese is the perfect place to pick up an edible souvenir. It stocks upwards of 50 domestic cheeses, including local favourites like La Sauvagine and Le Douanier from Quebec, all of which are guaranteed to impress your nearest and dearest—if you can bring yourself to give your finds away. 34 ByWard Market Square.

12. For one-stop wardrobe stocking, we like Victoire Boutique in the ByWard Market. The clothes are mostly Canadian (with a few very special American designers thrown in for good measure) and there’s a cohesive mix of quirky togs and totally wearable classic pieces. 246 Dalhousie St.

Get out of town: Farm fresh
Pull on your wellies and prepare to get up close and personal with your food. Just an hour east of the city, Mariposa Farm offers a cozy weekend lunch in a rustic, neo-hippie setting. Sunday dawdlers can soak up the bucolic landscape (think lush, green trees, tall grasses, faded outbuildings and even the occasional haystack) and later go on a tour of the barn with farmer Ian Walker. 6468 County Rd. 17, Plantagenet.

Lyle Slater’s Upper Canada Cranberries is another super-accessible farm. Slater offers free tours and taste tests of his tart, no-sugar-added cranberry juice—just be sure to call ahead. 2283 Stagecoach Rd.

Set by the banks of the Rideau River, Clarmell Farms is the best place in the city to score creamy, highly acclaimed chèvre. Farmer Paul Mussell moonlights as a comedian while son Ryan tends to the herd in this family-run operation. 3401 River Rd., Manotick.

A visit to the Garland Sugar Shack is the cure for the kids’ “I’m bored” blahs. This maple-syrup farm sells maple butter, tarts, popcorn, jelly and even cotton candy. 5930 Garlandside Rd., Vars.

It may not be Napa, but Ottawa’s vineyards, like Domaine Perrault, are gaining ground with the Sideways demographic. The family-run vineyard makes 10 varietals by Ottawa enologist Bernard Martineau, so leave room in the trunk for a case (or two). Open May 20 to December 24; 1000 Perrault Rd., Navan.