Today was the saddest day

Today I am remembering my Grandpa T, Grandpa J and my father, along with all the other soldiers who gave so much so that we could be free. And then I came home to devastation. 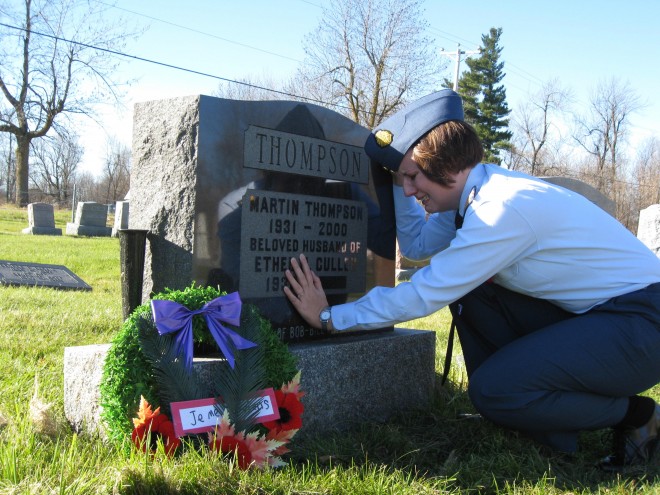 Today, I went to Howick, Quebec in order to go to my Grandpa’s grave for remembrance day. My Grandma and Grandpa met in Howick, fell in love, and that’s why he wanted to be buried there. I also took some time to visit the elementary school there to discuss being in the military (more on that in tomorrow’s post) and it was so rewarding to see all those faces, respecting all the lives lost and sacrificed. I was honoured to be there.

I went to my Grandpa’s grave knowing it would be hard. I knew I would cry a little, get emotional, find it hard. Odd, but the last time I was there was when I was on my way to basic training. Now I’m going there as I’m on my way out of the military. Grandpa did always have a perfect sense of timing.

I set up my camera to take sporadic photos every 30 seconds so that my pictures would not appear staged. The emotional you see in this photo is real and so is the pain. He was such a good man who never stopped giving. I’ll never forget his contribution to the Korean war and all that he gave so that others could live freely.

I went up to his grave, saluted, then placed the wreath next to his name. It might have looked odd to passersby, but Grandpa would have understood. He would have been proud that my salute is very straight and that I marched properly (although, with a limp lately). I talked to him for a while about my life. I told him how proud I was, how I would never stop remembering. I told him I missed him. I told him I would never forget him telling me to “never stop telling stories”.

I promise, Grandpa. The stories will never stop. I will keep on writing.

Before I left, I asked him if he would feel differently if I hadn’t come in uniform. If I was a civilian next year, would he look at me differently? Be less proud? I don’t know why I asked. I knew the answer. He would have been proud of me for even the smallest accomplishment. My impending release from the military doesn’t tarnish my success while in it.

I drove home feeling emotional and eager to see Duncan after a night away from him. He was his usual happy self, wagging his tail and getting in my path in the most fantastic way so that I have no choice but to bury my face in his fur and love him and forget how hard today was. 30 minutes later, just as I came to sit down on the couch and cuddle him, he had a seizure and died and the vet was not able to save him. My beloved Duncan. My treasure. My eternal comic relief. My drape dancer. My kind tail-wagging soul. Not just my dog. My friend. My dearest and most loyal of friends. No. Not a friend. A cherished and vital part of my family. Duncan was my family.

For all the non-dog owners, perhaps you`re rolling your eyes. Perhaps you think I`m being melodramatic. But when you’re house is lonely already and your dog makes you laugh when sometimes you feel you have nothing to laugh about, you hold on to that. Duncan gave this house light when it was so badly needed. Perhaps he thought I was on my way to happiness. Perhaps his job was done and so he’s left me now, knowing that in our short 3 1/2 years together, I had grown stronger. The first six months of Duncan`s life, he was abused. He came into my life and was so difficult but when I would be on the brink of tears from him eating another item in my house, he would do something so silly that I would laugh. He taught me that not everything will be the end of the world. Losing that pair of pants to his ambitious appetite would not kill me. But losing Duncan feels like it just might.

It seems fitting that a soldier`s dog die on Remembrance Day. I certainly won`t ever forget, Duncan.

Today, I’m missing two great beings who have graced my life for too short of a time. One who gave his life in service of his family and his country and another whose sole mission was to love me. And he did a damn fine job of that.

I miss you Grandpa. And Duncan, I have no idea how I`ll ever sleep without you here.

Suddenly, I feel so very lonely.