Dr. John Rich issued a scathing critique of the women's liberation movement in the early '70s. We can't imagine what he'd think of Beyoncé. 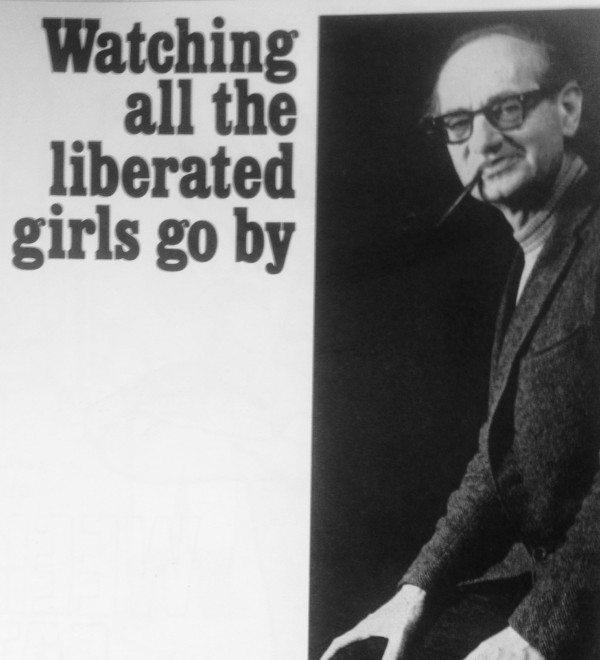 The times: All in the Family debuts on CBS; Evil Knievel sets a world record by jumping over 19 cars on his motorcycle; Charles Manson is sentenced to life in prison.

The “lunatic fringe”: Members of the women’s liberation movement. Three months before feminist activist Gloria Steinem called for revolution during her historic “Address to the Women of America,” psychiatrist Dr. John Rich turned a critical eye on “Libchicks” in his 1971 Chatelaine essay, “Watching all the liberated girls go by.” Rather than making concessions for extreme contingents in every political group, Rich argued that the feminist movement had a “lunatic centre,” calling out the ideology’s “excesses, dogmatism and plain dictatorial attitudes,” and comparing its members to “Maoists” and “Trotskyites.” Below we’ve rounded up the most quotable parts of Rich’s anti-feminist manifesto.

1. “Their world consists of We and They — goodies and baddies. Another characteristic [of fringe lunatics] is personal hostility to anybody who does not see things the way they do.”

2. “God knows that women have a raw deal, taken as a group. It’s true that it is an insult to human dignity to deny a woman equal chances of personal development simply because of her sex. It’s true that there should be equal pay for equal work, but…”

3. “No, dear Libchicks, I’m not saying ‘but nothing can be done about it.’ I salute your efforts to improve the situation, although I’m not sure whether you are speeding things up or slowing them down.”

4. “Of course you’re right when you say that marriage, at present, often frustrates, demeans and exploits a wife and mother — but do you believe that it never frustrates a father? Before my own kids had grown up, there were many jobs I’d have liked to do, many places in which I’d have liked to live, but I had to feed the little so-and-sos. But I’m not complaining: I chose to have children. And I don’t see how anybody can presume to decide whether my wife or I made the greatest ‘sacrifice.'”

5. “Although I agree that, on balance, men have a better deal than women, I suggest that you cannot offer any real suggestions for improvement if you persist in seeing the situation as completely one-sided, and as a male plot.”

6. “The New York Radical Feminist Manifesto points out that training into stereotypes beings in the nursery, that little girls are trained into being clean and polite while their brothers are ‘allowed to fight, to get dirty, be aggressive and self-assertive.’ Another manifesto from New York demands that we ‘destroy the institution of heterosexual sex.’ It also demands the elimination of marriage and family. These examples, one after the other, lead me to the conclusion that the Libchicks really do secretly believe that women are inferior. Why else would they be so anxious to do away with everything that makes them female?”

7. “If you don’t agree with my manifesto, please don’t write to me about it. I’m going to be to busy doing the housework.”