In the late '80s, we offered readers the perfect meal plan for every themed shindig. Because your party guests aren't going to feed themselves. 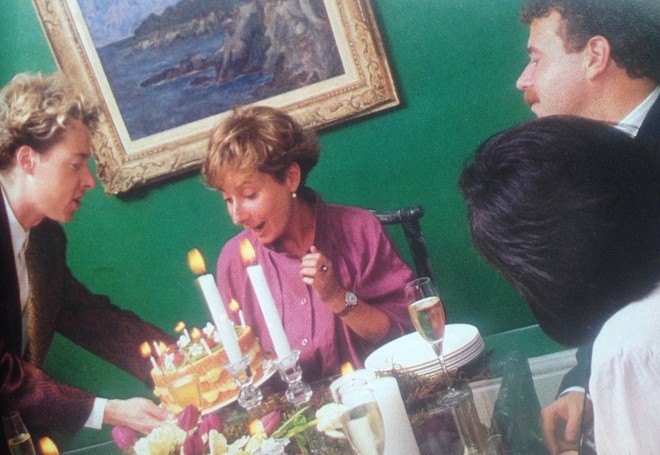 The times: Calgary hosts the Winter Olympics; The Phantom of the Opera opens on Broadway; Tiffany’s “Could’ve Been” is the number-one single in Canada.

The shindig: Themed adult birthday parties. Let’s face it: food is the focal point of pretty much every get-together worth attending, but it’s not easy managing decorations, compiling a guest list, and planning a creative edible spread. In 1988, Chatelaine food editor Monda Rosenberg invited readers along on a grown-up party crawl to showcase a whack of diverse menus for birthday-celebrators of all stripes. First up was David Battle’s “California Dreamin’ party for six”—a “perfect excuse to throw a summer-style party in the middle of winter.” Poached red snapper, pesto-stuffed tomatoes, and an airy lemon-curd angel food cake all made the menu. Next was the “Western shindig for 10,” hosted by Hugh and Sandy Sisley, where guests could nosh on a heaping pile of Stampede (beef) ribs, hearty chili, cornbread (of course), and a glazed bourbon-applesauce cake, all while “Willie Nelson and k.d. lang albums spin a country-western mood.” The standout theme of the bunch was a “Tango Argentina sit-down for eight” planned by interior designer (and Buenos Aires native) David Margulis and his wife, Gina. Attendees were treated to a pre-dinner tango lesson, which was immediately followed by a smorgasbord of cheese empanadas, authentic Argentinian matambre—a steak dish that literally translates to “hunger killer”—and caramel-filled toasted-coconut cake. With dishes like these, who needs booze?