Lloyd Robertson, Peter Jennings, and Keith Morrison—30 years ago, we deemed them the hottest names (and faces) in Canadian news. 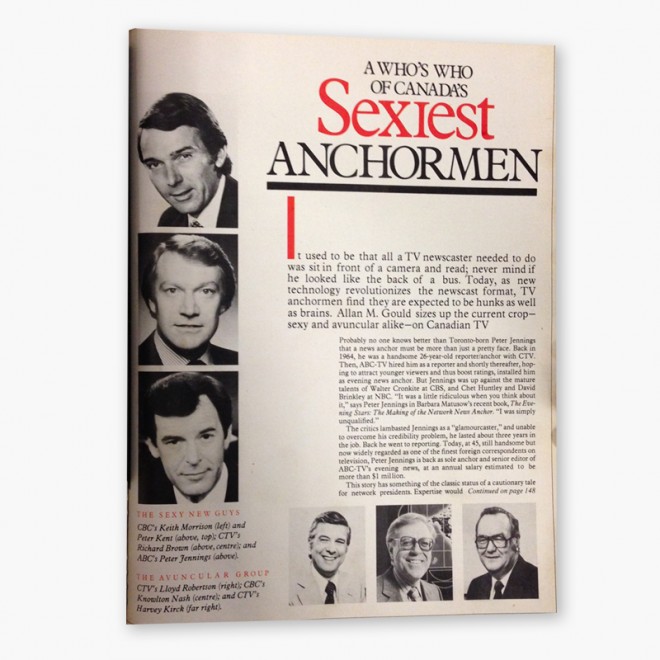 The accolade: Canada’s sexiest anchormen. In the early ’80s, advances in broadcast technology meant better sound, a clearer picture, and thus the demand for more eye candy on the nightly news. Chatelaine writer Allan M. Gould wrote in our 1983 issue, “It used to be that all a TV newscaster needed to do was sit in front of a camera and read; never mind if he looked like the back of a bus.” But as our featured telegenic gentlemen—like CBC’s Keith Morrison and Peter Jennings—found out, balancing a chiselled jawline with journalistic credibility was no easy task. (Said Morrison, “There have been occasions in my career when I felt my work wasn’t taken seriously because of my looks.”) Their authoritative delivery of the evening’s top stories was appreciated: Lloyd Robertson received his share of love letters, while Peter Kent got some marriage proposals out of it. Of course, their luscious heads of hair probably helped. As former CTV anchor Richard Brown put it, “All the sets and whiz-zoom-bang of camera angles and editing mean nothing if the person on the air isn’t at least pleasant-looking.”