Throwback Thursday: In 1971, we talked about rape and consent

Our columnist condemned the fact that in cases of sexual assault, the victim’s conduct is often scrutinized more closely than her aggressor’s. It’s a conversation we’re still having 43 years later. 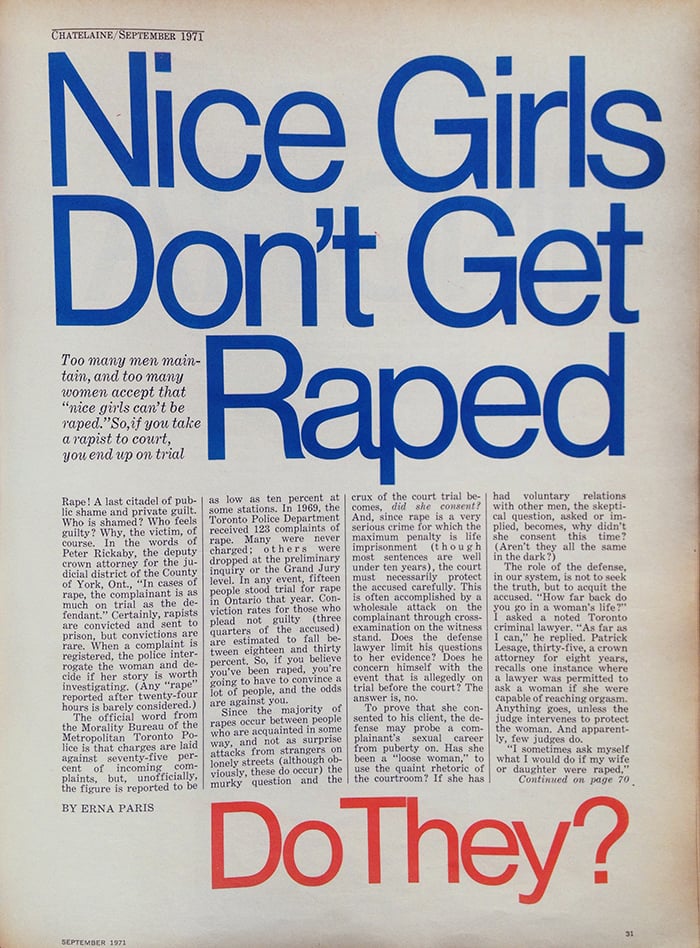 The times: August 26 is established as Women’s Equality Day in the U.S.; The Ed Sullivan Show airs its last episode; John Lennon releases “Imagine”; Apollo 14 lands on the moon.

The question: Contributor Erna Paris wrote a feature that asked, “Nice girls don’t get raped, do they?” In it, she spelled out the myriad ways in which police, courts, and the court of public opinion are set up to discourage victims of abuse from seeking justice.

This issue, perennially charged, exploded this week, after disgraced radio host Jian Ghomeshi was fired from the CBC amid allegations of abuse. On Monday, the Toronto Star released its preliminary coverage of the case, taking pains to highlight that the anonymous victims were both “educated and employed.” What might have been benign descriptors in most other stories was broadly understood as an attempt to bolster the women’s credibility in the absence of publishable names and faces. A social-media firestorm promptly erupted.

On Wednesday evening, one woman agreed to be identified. Canadian actor Lucy DeCoutere told the Star that in 2003, Ghomeshi choked and slapped her without her consent. DeCoutere’s accusations now stand alongside those of eight other women, who have described similarly violent and non-consensual behaviour to both the Star and the CBC.

Despite a stated fear of online harassment, professional damage, and retaliation from Ghomeshi, DeCoutere and the women who choose to remain anonymous have brought their stories forward. In this country, that doesn’t happen much. Out of every 1,000 sexual assaults each year, only 33 are reported, largely due to shame, fear and intimidation. And of those 33 reports, a meagre three actually result in convictions.

This excerpt, taken from Paris’ 1971 column, lays out the need for a radical shift in how we talk about victims, rape and consent. We live in a culture that is designed to promote complicity and silence, she wrote. Forty-three later, when it comes to dignity, victims are still asking for it.

Nice girls don’t get raped. Do they?
Too many men maintain, and too many women accept that “nice girls can’t be raped.” So if you take a rapist to court, you end up on trial.
By Erna Paris

“Rape. A last citadel of public shame and private guilt. Who is shamed? Who feels guilty? Why, the victim, of course. In the words of Peter Rickaby, the deputy crown attorney for the judicial district of the County of York, Ontario, ‘In cases of rape, the complainant is as much on trial as the defendant.’ Certainly, rapists are convicted and sent to prison, but convictions are rare. When a complaint is registered, the police interrogate the woman and decide if her story is worth investigating. Any ‘rape’ reported after 24 hours is barely considered.

“Since the majority of rapes occur between people who are acquainted in some way, and not as surprise attacks from strangers on lonely streets (although, obviously, these do occur), the murky question and the crux of the court trial becomes, did she consent? And, since rape is a very serious crime for which the maximum penalty is life imprisonment…the court must necessarily protect the accused carefully. This is often accomplished by a wholesale attack on the complainant through cross-examination on the witness stand. Does the defense lawyer limit his questions to her evidence? The answer is no.

“…Has she been a ‘loose woman,’ to use the quaint rhetoric of the courtroom. If she has had voluntary relations with other men, the skeptical question, asked or implied, becomes, ‘Why didn’t she consent this time?’…Not surprisingly many rapes are simply not reported. It becomes simpler to forget a bad experience than to go through the two-fold humiliation of the witness stand, where you will first be questioned about the act of intercourse itself: ‘And then what happened, Ms. X? And after that? What position were you both in? And how long were you in that position? That’s a long time, Ms. X…’ Secondly, about your past lifestyle. Simpler to avoid a situation where, if the accused is acquitted, as he likely will be, the implied guilt will be transferred to you. As one RCMP officer put it, ‘A woman may lay charges once and go to court, but if she’s ever raped again, she’ll know better.’

“Jurors are ordinary people who carry their private lives with them into the jury room. Here, we get to the crux of the problem — prevalent social attitudes to rape. Obviously, when the issue in a rape trial is consent, the sexual attitudes of each jury member play an important part. We are conditioned from childhood to assume certain roles. Boys are taught, explicitly or implicitly, that they are to be “aggressive” in the world and in bed. Girls are taught to be more passive. And throughout most of our history, from Adam and Eve down, sex has been a somewhat tainted attraction, to be rejected by all high-thinking people, except when they desire to propagate their chromosomes. It has been the corrupt woman’s treasure, an ultimate, most dangerous and often evil weapon with which she could control and manipulate man, destroy and wrench him from his Garden of Eden. For this reason, many men deny the very fact of rape.

“…Does ‘no’ always mean ‘no’ in our culture, or is it true that many females play a tacitly understood sexual game? Dr. G., a middle-aged Toronto psychiatrist, who prefers to remain anonymous, thinks saying ‘no’ is a game, and that there is a biological basis for playing. He says that the warming-up period of the female mammal is longer than that of the male. She must inhibit him as long as possible so she can reach the same level of excitement through tactile arousal. ‘Even in rat society, the female says no and wants yes,’ the doctor added.

“Stanley Gershman, a lawyer in his early thirties, goes even further. ‘If society recognized a woman’s right to have love affairs and express herself sexually, and brought up their daughters accordingly, then rape would be seen as an act of violence, punishable as violence,’ he says. ‘But if we believe that women are confused about sex and commit acts that are contrary to their conscience, then the attitude of the court, the jury, and society in general becomes, ‘Look what she did in her confused state: she led him on because she really wanted it (sex), but she couldn’t accept her behaviour and cried rape. If we accepted the natural sexuality of both men and women, then the kind of intimate, embarrassing cross-examination of a complainant’s past life would no longer be relevant.’ ”

Note: This article has been updated to include an expanded version of Paris’ column.