Thin and fat both disgusting, Tiny Fey is still hilarious, and Aung San Suu Kyi is out of prison

In an article in yesterday's Globe and Mail, television critic John Doyle asks readers which is more disgusting: being too thin or too fat? He frames the debate around the television show Mike And Molly, which chronicles the relationship ups and downs of an overweight couple. 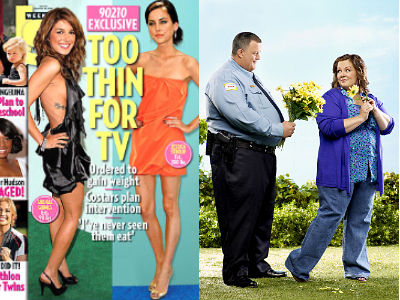 In an article in yesterday’s Globe and Mail, television critic John Doyle asks readers which is more disgusting: being too thin or too fat? He frames the debate around the television show Mike And Molly, which chronicles the relationship ups and downs of an overweight couple. The show recently drew attention after a Marie Claire blogger said of the show, “I’d be grossed out if I had to watch two characters with rolls and rolls of fat kissing each other.” Doyle poses the debate as one of socioeconomic status: it’s wealthy and elitist to strive for unhealthy thinness, but ignorant to embrace obesity as authentic and real. Says Doyle: “In the United States, the poor are fat, the rich are thin. You want to call that a disgusting mess? Go ahead, and enter the culture wars at your peril.”

Are you that jerk at the party who introduces yourself to people you’ve already met? Now science has engineered a handy new excuse for your poor face-recognition skills: you’re just too good of a reader. A new study has found that people with excellent reading skills are bad at recognizing faces. Scientists postulate it’s because reading uses a part of our brain once reserved for visually tracking animals.

Prime Minister Stephen Harper loves to chirp about how his swift response to the recent economic downturn saved Canada, and credits his economic stimulus package with steadying the Canadian economy. Now, a new report reveals that much of the stimulus money was spent after the economic recovery was well underway. As Maclean’s points out, “the recession was long over before the money was out the door.”

Tina Fey didn’t get emotional when she was presented with the prestigious Mark Twain Prize for American Humour on Sunday because, in her words, “I’m a stone-cold bitch.” She also announced her regrets at being passed over for the Judy Blume Award For Awkward Puberty and professed her eligibility for both the Harper Lee Prize for Small Bodies Of Work and the Nathaniel Hawthorne Prize for Judgmental Nature. Fey is the youngest person to ever win the award, and only the third woman to top the list in the prize’s thirteen year history.

Myanmar pro-democracy icon Aung San Suu Kyi was released from prison over the weekend and was welcomed by thousands of cheering followers. She is already beginning work to legitimize her political party again, which was disbanded during her seven-and-a-half years in prison. International experts believe her release may have been a strategic attempt to bring an end to Western sanctions imposed on the country over the past decade.