There is a reason I didn't join the Navy... 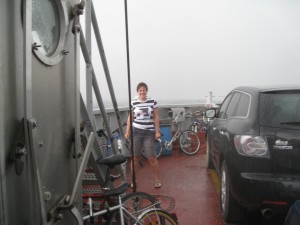 When I was signing up to join the military, I knew that I would hate living in the woods all the time so I realized that the Army was not the life for me. I also knew that I could never handle the small spaces and inevitable seasickness that comes with the Navy (this is all in part to a big fear of vomiting!). This is how I chose the Air Force. It wasn’t necessarily the best way to choose my environment but at the age of 18, it was the only way I knew how. Hey, at least I wasn’t like the girl next to me who joined the Navy because she didn’t look good in blue or black. Anyways, all this to say, this weekend, my friends Bob, Dan and I decided to take the ferry to Wolfe Island to go to the beach, as all three of us have birthday’s within a month of each other and we were making a meagre attempt at celebrating.

When I was first posted to Kingston, Bob and Dan took me under their wing when it felt like no one else would. We became the three musketeers who did everything together and now they’ve become more like an extension of my family. When Bob left for Afghanistan last year, I felt almost as lonely as I do without Ben, but Dan was there immediately to pick up the slack. They are as true as true friends get. Currently, Bob’s girlfriend is also away in Afghanistan, so we all have a little bit more time for each other now. So, to commiserate in our loneliness, we decided the beach was the place to be.

We packed some snacks, drove onto the boat, then hiked into the sandy escape, which turned out to be just that. It was a quiet place but stunning! We could have been in Cuba for all I knew…big rolling waves, nice sandy beach and a bright sunny day. We played like kids in the water and for a few moments, I let myself float along the top of the lake, not at all aware of the various stresses in my life. It was the kind of day that relaxation is made of and I needed it. But when some dark clouds rolled in, we decided it was time to head back to the ferry, hardly noticing that 3 hours had passed. We could tell, by looking at the sky, that this 20 minute ferry ride could be…interesting. And OH it was INTERESTING. All my reasons for NOT choosing the Navy came flushing back to me!

One moment, we could see our destination of Kingston, the next, just the sheet of rain making mincemeat of the water. People were scattering into their cars and the shelter of the boat but my thought was…hell, I’m already wet from the beach…what does it matter? I was determined to stand out there any weather the storm out of some perverse need to challenge the force of nature that was threatening what had been an otherwise lovely day. I regretted this decision soon after when the rain started hitting me like a pellet gun. It was coming down so hard that chips of the paint from the boat were flying in the air and sticking to my skin like confetti and I could harly keep my eyes open because it hurt so badly. I realize that the photo below cannot possible depict how strong the storm was but this is me at the end of the ferry. To add to the joy, we finally reached Kingston and discovered that the power was down throughout the entire city, which meant the bridge could not be lowered in order to allow us off the boat and so we sat there for an hour before any success. At first, I sat in the car fuming. Now I was going to go home to no power, no way to make dinner, no T.V. And furthermore, I would have stayed lounging in the sand had mother nature not come along and poohed all over my parade. Nothing in my life feels like it’s turning out quite right lately, even when I try to just have a lazy day on the beach. Yes, I was angry. But then I got home to Duncan (who was completely unfazed by the storm), set up some candles and snuggled into the couch with a good book. I had no phone, no cable, no Internet and it was wonderful.

It forced me to slow down and realize that regardless of the eventual weather outcome, it had been a wonderful day and for once, I spent the whole day without thinking that something was missing without Ben. I let myself have a good time and not feel guilty for having fun without him. Only friends like Bob and Dan could have done that for me. Thank God for my fellow musketeers. Correction…thank God for my second family.