The Word: On Boko Haram, Reddit, and the gender wage gap

The extremist group seizes a Nigerian town, the social-networking site appoints a female CEO, and other news we’re talking about. 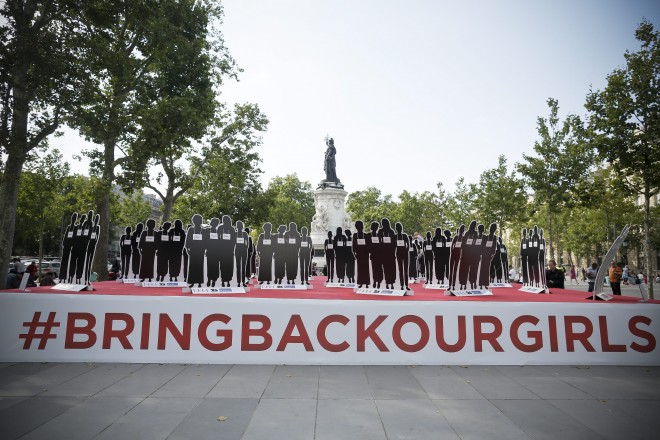 Boko Haram seizes Chibok. The militant Islamist group has taken control of Chibok, the Nigerian hometown of the 276 schoolgirls its fighters abducted last April. According to witnesses, residents fled their homes on Thursday after the vigilantes attacked, taking down communications towers in the area. Chibok gained international attention earlier this year after Boko Haram kidnapped many of the town’s female students while they were at school. The incident prompted the creation of the social-media campaign “Bring Back Our Girls,” along with widespread condemnation of the Nigerian government’s intervention approach. More than 200 of the young women are still missing.

Reddit gets its first female CEO. The web company tapped COO Ellen Pao for the CEO job on an interim basis following the departure of Yishan Wong. (Apparently he had some quibbles with the site’s choice of office space, and was pretty stressed out in general.) Reddit’s lead investor Sam Altman chalks up Pao’s promotion to her “vision, execution, and leadership.” In other news, the U.S. also just appointed its first female Postmaster General, so high-fives all around for women in high places.

Ontario court rules in favour of traditional medicine. According to a verdict delivered Friday by Justice Gethin Edward, the Brantford family of a young First Nations girl battling cancer is legally permitted to pursue traditional alternatives to chemotherapy. McMaster Children’s Hospital initially took Brant Family and Children’s Services to court for refusing to take the girl into protective custody when she stopped a potentially lifesaving course of chemo in August. The case sets a precedent in maintaining aboriginal rights to cultural healing practices regardless of conventional medical protocol.

Bridging the wage gap. According to Bloomberg Businessweek, women are paid less than men, whether they are in the same career field or not. (This data goes against past assertions that women don’t earn as much as their male counterparts because they tend to gravitate towards industries with below-average salaries, like advertising). Either way, pay us more, please.

One more reason to feel anxious. A new study out of Toronto’s Baycrest Rotman Research Institute has confirmed a link between increased anxiety and the development of Alzheimer’s in older patients suffering from mild memory issues. Researchers say this should provide a “wake-up call” for people as young as 30. (Women are also twice as likely to experience anxiety issues as men, so take note, ladies.)

Body Labs gets a boost. The American tech company, which turns body scans into digital avatars, just received a $2.2 million investment. These 3-D models could potentially revolutionize the way fashion companies size their clothes, resulting in more realistic (and customizable) options for the female frame. Take that, weird-fitting jeans!

Sweden fights simulated sexism. The Swedish video-game trade group Dataspelsbranschen is set to explore the possibility of labelling games as “sexist” if they contain harmful gender stereotypes. (This system is a bit more specific than North America’s ESRB ratings. For example, Grand Theft Auto V — one of the more widely held examples of gaming misogyny — is only labelled “M” for Mature.)

Missing the Target. Bad news, online shoppers: The brand’s Canadian branch won’t be launching an e-commerce site anytime soon — and definitely not before the holidays. Some retail analysts consider this news to be further evidence of the company’s lack of preparation before its 2013 move north of the border.

A very Goop-y Christmas. Gwyneth Paltrow’s lifestyle site released its annual holiday gift roundup on Thursday and it’s, well, everything you’d expect. Some of the more notable entries include a $12,000 Esque vase, a $1,500 Hermès blanket, a gold juicer — and a Furby. Can’t forget about the kids!

Sportswear (literally). Who better to curate Call It Spring’s new après-ski collection than Canada’s own Olympic medal–winning Dufour-Lapointe sisters? Justine, Chloe and Maxime — who finished first, second, and 12th (respectively) in Sochi — have each created their own personalized selection of winter footwear and accessories for ski and chalet bunnies alike.

#FeministPrincessBride. Time Magazine’s decision to include the word “feminist” in its recent banned-words poll was so — ahem — inconceivable to Canadian writer Anne Thériault that she took to social media to voice her displeasure. “Having @time include ‘feminist’ on their words to ban list makes me want to say it even more, like a petulant child. Feminist, FEMINIST,” she tweeted. “Like in The Princess Bride when Miracle Max’s wife chases him around yelling, ‘Humperdinck, Humperdinck, Humperdiiiiiiiinck.’” And, lo, a hilarious new hashtag was born.

“I didn’t know I could get cellulite on my face! What a fun adventure!” – Amy Schumer talks aging, beauty standards, and why you shouldn’t wear a drugstore poncho out in public on the most recent episode of Jerry Seinfeld’s web series Comedians in Cars Getting Coffee. (The good stuff starts around 6:50.)