The Word: On Randy Carlyle, the common cold, and self-adjusting belts

The Leafs are in the market for a new head coach, the preferred habitat of rhinoviruses, and an accessory that expands with your growing waistline. 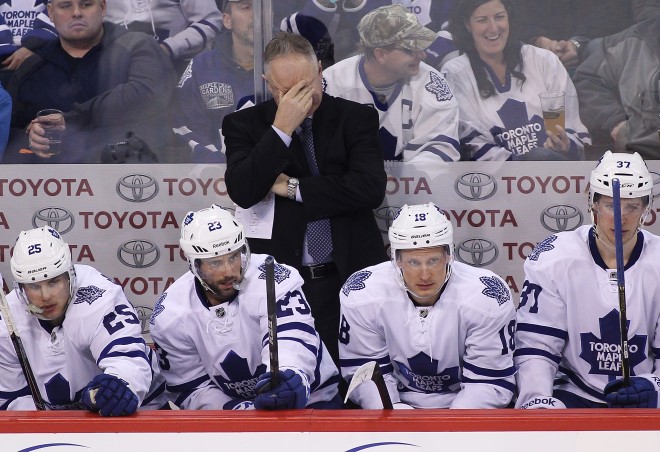 Falling Leafs. The Toronto Maple Leafs announced Tuesday that Randy Carlyle has been fired from his position as coach of the blue and white. The move follows a downward trend for Toronto’s NHL team—the Leafs have managed a 21-16-3 record this season, but lost five of their last seven away games. (Fans will also bitterly recall that the team lost 12 of its final 14 games last season.) General manager Dave Nonis said at a news conference, “I think we’d all agree we’ve had some good periods, good stretches, but I don’t think I can stand here in front of you and say that we’ve been consistent.” No word on who will fill Carlyle’s skates.

Wynne and Harper: together again. The Prime Minister and Ontario’s premier came face-to-face on Monday for the first time in 13 months. The 45-minute session came after multiple requests by Wynne to meet with the PM in the interest of discussing high-level issues, like spending and infrastructure. (Both are topics that they’ve publicly disagreed on in the past, by the way.) According to a statement released by the Prime Minister’s office, the two had a productive chat about the Feds’ new Building Canada Fund, trade, the automotive sector, and resource development. Wynne and Harper “agreed to keep in touch.” (We hope so?)

Toronto tourism. Much to the dismay of urbanites across our fine nation—we see you, Calgarians—Toronto has been named the best Canadian city to visit in 2015 by the wanderlustful journalists at Vacay.ca. The site attributes Hogtown’s desirability to the plethora of big-ticket events slated for the city this year—namely, the Pan Am Games and TIFF—in addition to its usual cosmopolitan allure. Revelstoke, British Columbia and Nunavut’s Auyuittuq National Park were named the second- and third-place must-see destinations.

Bundle your face. Per its name, the common cold virus has been found to thrive in chillier nasal cavities.

Spot treatment. Would you rather live with adult acne or develop a resistance to potentially life-saving antibiotics? We may soon have to choose.

Gird your savings accounts. This is how much you need to earn to afford a home in major Canadian cities.

Double-double trouble. Two Tim Hortons execs have stepped down less than a month after the Canadian coffee chain merged with Burger King.

Ask Murakami. The Japanese novelist is now a multi-hyphenate, having recently added “advice columnist” to his resume.

A less-than-happy ending. Author Nicholas Sparks has separated from his wife of 25 years. Didn’t he read The Notebook?

Name game. Blake Lively gave birth to a daughter back in December unbeknownst to the tabloids—and no, she probably isn’t named after an artisanal jam.

Sonic youth. The Walkman is back. Nostalgia doesn’t come cheap.

French start-up Emiota has unveiled Belty, a smart waist accessory that automatically adjusts its fit according to a wearer’s eating and exercise habits. This would have been highly useful about two weeks ago, but SOLD.

“TLC is presenting [the subjects’] lives as entertainment, and sending the dangerous message that being gay is something that can and ought to be changed.” — TLC’s Jan. 16 special My Husband’s Not Gay has been pre-empted by outrage from organizations like GLAAD and a Change.org petition demanding its cancellation. (It had more than 80,000 signatures at press time.)