The trouble with crowning a queen of pregnancy

We've seen the headlines, "Who wins the battle for maternity-style supremacy?" Flannery Dean looks at the damage comparing mothers-to-be does. 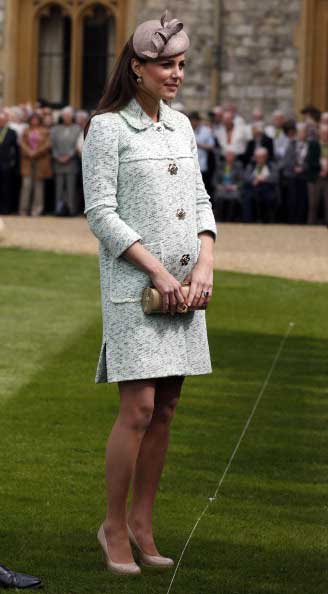 The photo feature ‘Who wore it best’ is a staple of gossip-driven celebrity magazines. But the kind of compare and contrast of celebs in fancy dress that keeps us entertained at the checkout counter now extends beyond the red carpet to include celebrity maternity wear.

In the mom-to-be style wars, no two women have been as mercilessly followed, photographed and picked apart as the Duchess of Cambridge, Kate Middleton, and the B-queen of reality TV Kim Kardashian.

Both women are pregnant with their first child and appear to be on the same fertility track, with deliveries expected in mid-to-late summer. But no two women could be more different when it comes to dealing with their blossoming mid-sections.

Kardashian, who can’t be considered shy when it comes to soliciting publicity, has never exactly been known for her style — a bodacious derriere doesn’t have the same currency at Vogue as it does at In Touch, unfortunately.

During her pregnancy Kardashian has taken what could be called the ‘more is more’ approach. Dressed up in towering heels and leather pants, avant garde pantsuits, sheer lacy numbers and goddess dresses, she’s been all over the style map (though some may argue, she lost the trail a while ago and is desperately in need of a GPS to find her way back).

Above all else, Kardashian has used clothes to highlight her baby-lump. It’s replaced her backside as the focal point of her attire.

Middleton, however, has taken a more demure approach. Rather than draw attention to her pregnancy, she’s modestly attempted to conceal it, employing the trompe l’oeil of long jackets and carefully tailored dresses.

Proving that female celebs can’t win one way or the other, both women have taken heat for their choices.

Kim Kardashian has been called fat, while Kate too skinny. One Globe and Mail writer recently argued that Kate wasn’t gaining enough weight and somehow presented a bad example to women, a criticism, which I take to mean that the Duchess wasn’t showing sufficient pregnant-ness to satisfy the writer’s fictional perception of ‘what a woman should look like when pregnant’.

As someone who is nearly seven months along in her first pregnancy, however, I feel confident in proclaiming that right now Middleton, like Kardashian, would be feeling a whole lot of pregnant.

Considering Middleton is suffering from the near-debilitating condition of hyperemesis gravidarum, she deserves a little more credit for showing up anywhere with a smile. If I were her, I wouldn’t pull off such a polished look, but rather would turn up to another ribbon cutting wearing sweat pants, a stained tank top and with a toilet seat hanging around my neck (when in doubt, accessorize!).

What the maternity style wars ultimately reveal, however, aside from our increasing interest in indulging the whims of a publicity hound (Kardashian) and tormenting a modest young woman nursing a condition that must feel like the worst hangover of her life (Middleton), is that women — pregnant or not — don’t fit into any prescribed ideal of beauty, style or maternal dreaminess.

Women are pretty distinctive creatures. You might even call them unique human beings equipped with singular personalities, body types and preferences. Considering such diversity, it seems kind of ridiculous to set up a maternity-style competition, let alone try and crown a queen of pregnancy.