The money issues couples fight most about

The great popularity of romance novels may be due to the fact that they often skip the parts where the lovers squabble over that month’s Visa bill, or whether or not to use this year’s tax return to buy a new dryer or dishwasher. 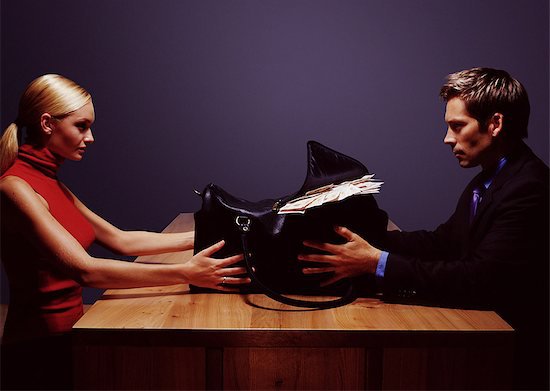 The great popularity of romance novels may be due to the fact that they often skip the parts where the lovers squabble over that month’s Visa bill, or whether or not to use this year’s tax return to buy a new dryer or dishwasher.

Life rarely skips such chapters, however. In fact, sometimes it seems as if reality skips past the longing looks and the white-hot nights, and steams straight ahead into the inevitable clashes of will that mark domestic relations.

But if knowledge is indeed power (and not just a guaranteed route to migraine), then it may help some couples to learn what money issues trigger the most arguments and so in future avoid them.

At number one on the list: Sharing the wealth.

Though it may seem odd to the couples that consider the pooling of financial resources the natural price of monogamy, there are some who feel differently. It’s this crew that bickers over when yours becomes mine and mine becomes yours, financially speaking. And given the fact that it’s at number one, these couples seem to fight a lot about it.

How to pay off credit card bills, car loans and student loans can cause heaps of trouble for a couple in love, especially if opposites have indeed attracted and one person comes into the relationship with a whack of debt while the other has been lucky enough (or thrifty) enough to escape the chains of 18 to 23 percent interest.

If you think ‘budget’ is a popular rental car company, then you may run into trouble with a financially savvy partner who wants to keep a tight leash on spending. That difference in approach to spending may be what leads to another sore spot identified by Crary on the list: secret spending or the keeping of money secrets.

If you don’t know what secret spending is then you’re probably the person in the relationship who is being kept in the dark about where your partner’s new boots came from or how your beloved’s hair appeared so much lighter (one might even say, highlighted) all of a sudden.

Is secret spending the financial equivalent of cheating on a spouse? No. It may simply be the price of domestic bliss.

Curious about what other money woes trigger fights? For the rest of Crary’s list, see the article here.