The Lazy Lady Voter, live from the debate

Our reluctant political correspondent chronicles the first leaders debate of the 2015 election campaign. 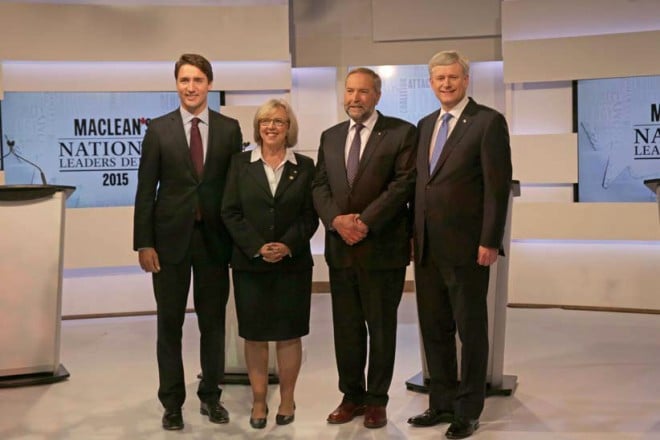 What do Canadians want in a leader? Fiscal responsibility? A robust knowledge of foreign affairs? Tax credits? Depends who you ask.

A perfect voter would say that consistent policy should be the most important factor on election day. But as a semi-informed, mildly superficial, urban millennial voter (the only time I made it to the polls, I spoiled my ballot), I put considerable stock in a candidate’s ability to out-charm their opponents at the podium. And I don’t think I’m alone.

Which is why, on the eve of the first debate of the 2015 federal election, armed with a purse sandwich and a quick pre-game scan of the #macdebate twitter feed, I (of all people) was on-site to scrutinize the rhetoric, posture, sweat quotient and wink-and-gunning ability of the four party leaders. (You know, the things that matter.)

What follows is a minute-by-minute breakdown of the night’s savviest soundbites, sickest burns and strangest uses of the word hoodlum. 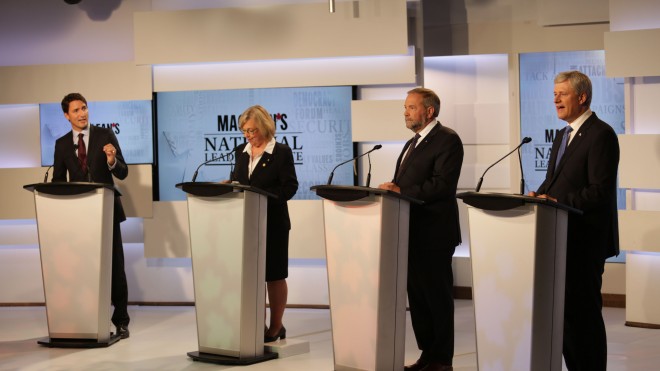 8:00 p.m.
The majestic intro music to the Maclean’s-hosted debate scares the absolute daylights out me, so we’re off to a good start, I guess? As the camera scans the night’s verbal gladiators, it appears that each of them has “slept with a coat hanger in their mouth,” to paraphrase one of my favourite Friends lines. Seriously, no one should be this excited to talk about the country’s economic downturn.

8:02 p.m.
The first question goes to a calm-looking Trudeau, who very quickly seizes the opportunity to discuss his party’s proposed middle-class tax break, call out young voters (as he is wont to do) and express concern over falling wages. Wait, what? Should I text my boss? I want to buy a house someday, damn it!

8:06 p.m.
A friend texts, “Canadian politicians need more charisma. They should be required to have a shot and a beer prior to the debate.” Speaking of, is the media area licensed?

8:07 p.m.
Elizabeth May finally chimes in. Hi, Elizabeth May! Right now, you are talking about austerity measures and, this is not sexist, but I just noticed how cool your glasses are. The slight cat-eye says “I am dead serious,” but the yellow tortoise-shell pattern gives off just the right amount of Green Party spunk. 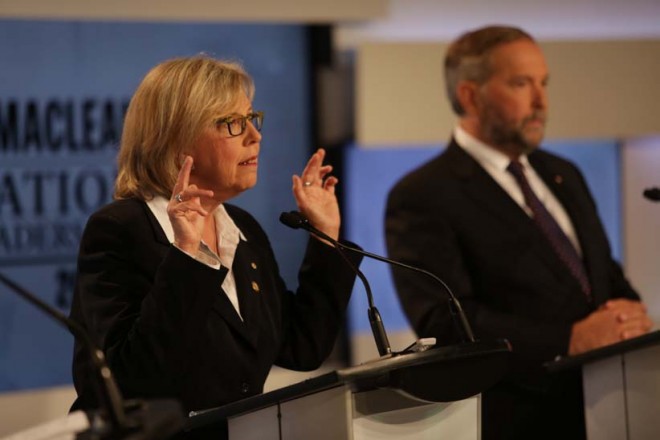 8:09 p.m.
Trudeau commends Mulcair on his ability to rebut his opponents, but then immediately accuses him of giving Canadians “false hope.” It appears Trudeau has decided on the “iron fist in velvet glove” approach to tonight’s festivities. He seems to be more unglued than usual. It’s compelling.

8:16 p.m.
Oh, Tom, I really want to like you, but your double-wide smiles are giving me the willies. I’m no political strategist, but you need to dial up the mean. The polls have you in second place!

8:23 p.m.
I will hand it to May — her approach is poised and congenial. But, oh boy, does she need to stop saying, “Excuse me” when interjecting and “With all due respect…” when starting a sentence. Girl, do not dull your shine.

8:25 p.m.
Mulcair issues the best burn of the night so far: “You’re going to do everything you can to hang onto your job, I’ll be creating jobs,” he tells Harper. 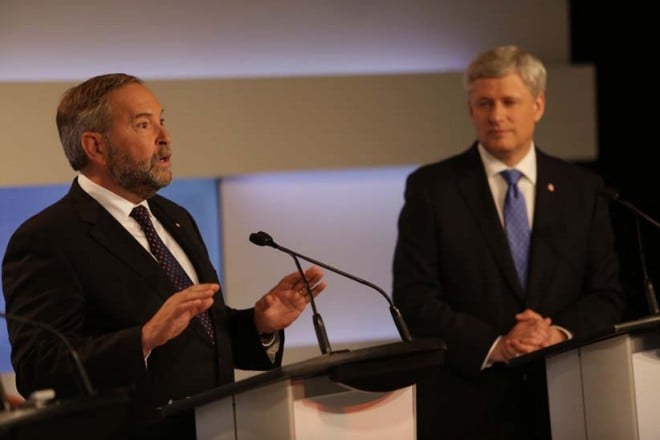 8:27 p.m.
We’ve reached the first commercial break. All this talk of an upcoming (or current?) recession is stressful. I locate a brownie.

8:37 p.m.
May rolls her eyes at Harper’s assertion that our emissions are decreasing. This is the kind of sass I’m talking about. Maybe the media tent is bugged.

8:56 p.m.
Only now do I realize that the lights have been off on the media patio this whole time, making the whole enterprise like one giant press sleepover. During the break, I conduct a minor thought experiment: Which candidate would I choose to talk me down from a panic attack? Harper. Who would most want a hug from? May. (Okay, Trudeau.) And let’s just call a spade a spade — Mulcair has the best radio voice.

9:00 p.m.
Moderator Paul Wells brings up May’s past description of the Harper government as “an elected dictatorship.” She says the insult wasn’t personal. A press member LOLs.

9:23 p.m.
I just realized someone has been playing a pan flute outside the media tent for the duration of the debate. They should store one in the studio for when Trudeau gets a little too hot under the collar. Which seems to be happening with some regularity tonight. 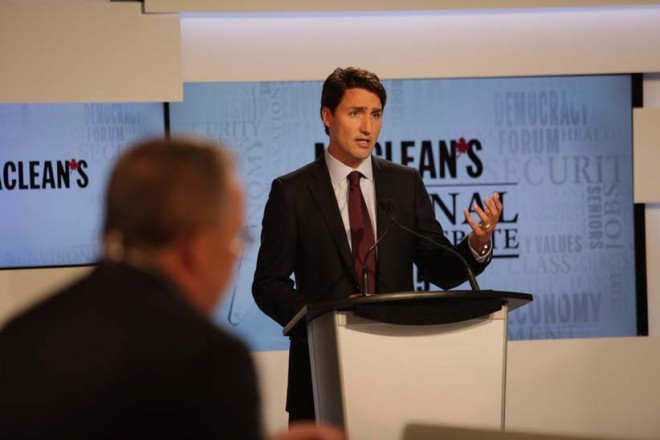 9:30p.m.
Has anyone else taken note of the deep left lean Harper has been rocking for almost the entire debate? His posture is an excellent physical manifestation of his “keep calm and carry on” approach to the economy. A savvy stance.

9:35 p.m.
Trudeau gets worked up talking about veteran’s rights — I swear I see his lip snarl. He launches into a circuitous soliloquy about his party’s military philosophy, so I’ll just be here taking selfies with my media badge until it’s safe to tune back in. 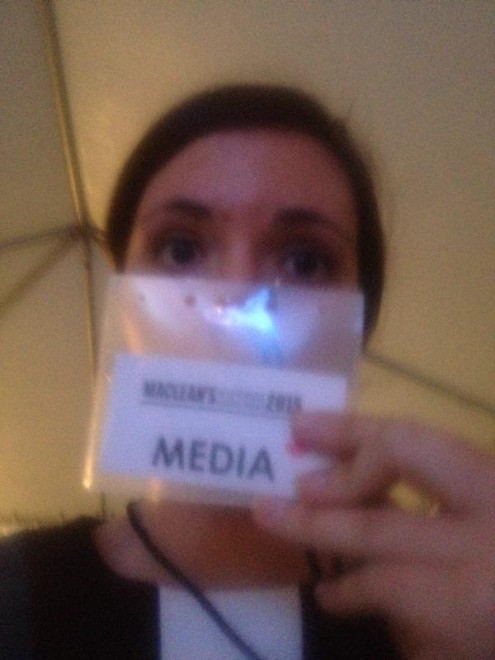 9:52 p.m.
After a cordial and mostly stimulating debate, the closing comments are a bit of a letdown. Of course, a few canned references to the “greatest country in the world” are to be expected, but the four leaders engage in a lot of empty sloganeering — the kind that validates political cynicism. At one point, Mulcair actually invites viewers to “Join us” (the NDP), which is pulled directly from a campaign ad. And now, for some reason, Trudeau is discussing the feelings in his bones and blood in his veins. I want my inner patriot to be stirred, but I feel mostly gross.

10:05 p.m.
Maybe that’s because I haven’t had a bathroom break in three hours.

10:15 p.m.
In the course of my first press scrum (woo!) Mulcair says he brought his wife along “in case [the press] get too tough on him,” May shares a glowing review of her debate performance from her daughter and Harper … has left the building. Trudeau, the final candidate in the scrum, is asked why he thinks some young voters would rather tune into the finale of the Daily Show instead of the first debate of the federal campaign. His answer skews a bit limp, so I head home to round out the night with my favourite political player: Jon Stewart.

Related:
Missed the debate? Watch it here
Justin Trudeau posed with a topless woman — hooray!
Is Justin Trudeau the candidate women have been waiting for?
Ruth Ellen Brosseau: from ‘Vegas Girl’ to NDP vice-chair