In today’s news: Javier Bardem and Josh Brolin lock lips; Americans are fatter than Canadians; behind the scenes with Old Spice; female empowerment is bad for your lungs; and why you can’t dance (it’s science!) 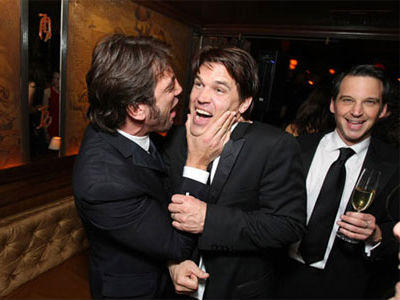 Image c/o Out in Hollywood

The general consensus seems to be that this past Sunday’s Oscar broadcast was among the worst in the show’s history. Word also has it there was one fun little moment that could potentially have livened up the otherwise humdrum affair: a kiss between Hollywood heavyweights Javier Bardem and Josh Brolin. The two paused on their way to the podium to momentarily lock lips, but we, the starved-for-anything-mildly-entertaining viewers, didn’t get to see it, because at the critical moment the camera cut away to Penelope Cruz, Bardem’s wife. The Academy is now claiming the kiss went unseen not because of homophobia, but because the moment was unscripted, and the shot of Penelope was planned. Luckily a photographer caught the moment, and it’s everything we didn’t know we were hoping for.

It’s now official: Americans are fatter than us. A new report from the U.S. Centre for Disease Control has found that a third of all Americans are obese, compared to a quarter of all Canadians. Both country’s obesity rates have risen dramatically in the past two decades, and the report described childhood obesity in the U.S. as an epidemic.

It’s hard not to crack a cheeky smile at The Man Your Man Could Smell Like, as he hula-dances in Fiji, strums a harp in the Andes, and splays himself shirtless on atop a grand piano. Now you can go behind the scenes with the man himself, Isaiah Mustafa, on the set of the Old Spice ads that made him famous. It’s hard to decide which is more impressive: the technical wizardry behind the hilarious one-take commercials, or Mustafa’s rippling abdomen and real-life charm.

And now, your unfortunate statistic of the day: apparently female empowerment raises the female smoking rate. A study of female smoking habits in 74 countries has found that women in more patriarchal societies like China, Pakistan and Saudi Arabia smoke far less than men, while those of us living in countries with superior female empowerment, like Canada, Australia and the U.S. smoke almost as much as our male counterparts. In China, 61 percent of men smoke, compared to only 4.2 percent of women. That gap is expected to close in the coming decades.

Are you one of those people that simply can’t dance? Now science has created a handy scapegoat for your lack of moves. Researchers at Oxford yesterday released a study that claims a tiny chemical messenger in the brain, dubbed GABA, helps facilitate the learning of new motor skills like playing tennis or piano, or dancing. If you have too much GABA, learning these tasks becomes difficult. So the next time you’re at a wedding and your significant other tries to drag you into the conga line, just tell him your GABA’s acting up.