The hidden health benefits of your ‘muffin top’

There may be some reasons to love — or at the very least, respect — that sweaty roll of flesh that separates your breasts from your backside. 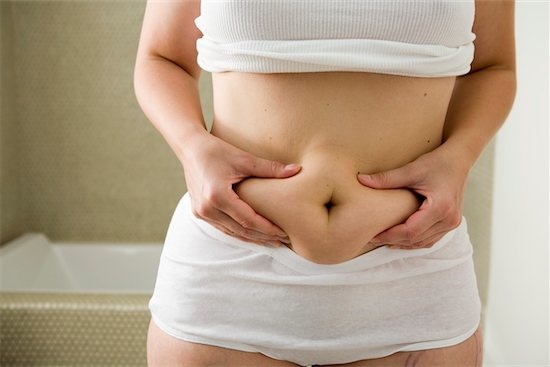 There may be some reasons to love — or at the very least, respect — that sweaty roll of flesh that separates your breasts from your backside. A spare tire, while often cited as a risk factor for heart disease and diabetes, may also confer some previously undiscovered health benefits. In fact, belly fat may occasionally do us some good.

On the website The Doctor Will See You Now, writer Alice G. Walton cites a study by researchers in Chicago that examined how the cells that comprise the deep layers of abdominal fat that lie under the muscle and surround the organs (a.k.a. visceral fat or omentum fat) interact with the immune system.

Strangely, visceral fat cells seem to help regulate the immune system by suppressing its aggressive response. As Walton points out, this curious interaction could help researchers understand how to craft better drugs to help curb autoimmune disorders, or diseases in which the immune system attacks healthy cells.

The study also suggests that this kind of deep abdominal fat contains other kind of cells, known as mesenchymal stem cells that further aid overall health. These stem cells are important because they possess the power to become other kinds of healthy cells in the body. In a sense they act as the equivalent of travelling EMTs, too, repairing injured tissues in other parts of the body with healthy new cells.

While you won’t find any doctors or health researchers making the argument that people should start packing on the pounds, particularly around their midsection to achieve these associated benefits — there’s got to be a better way to keep the immune system in check, right? The study’s findings do indicate that there is more going on under the surface when it comes to belly fat and its associated behaviours than previously thought.

So as you hit the pavement again in an attempt to shave a few pounds off your middle, console yourself with the fact that while your spare tire may not be your favourite house guest, the old gal is attempting to justify her extended stay by doing a little light internal housework.