A handy refresher for those who read the book in high school and totally forgot about it (and those who only pretend they've read it). 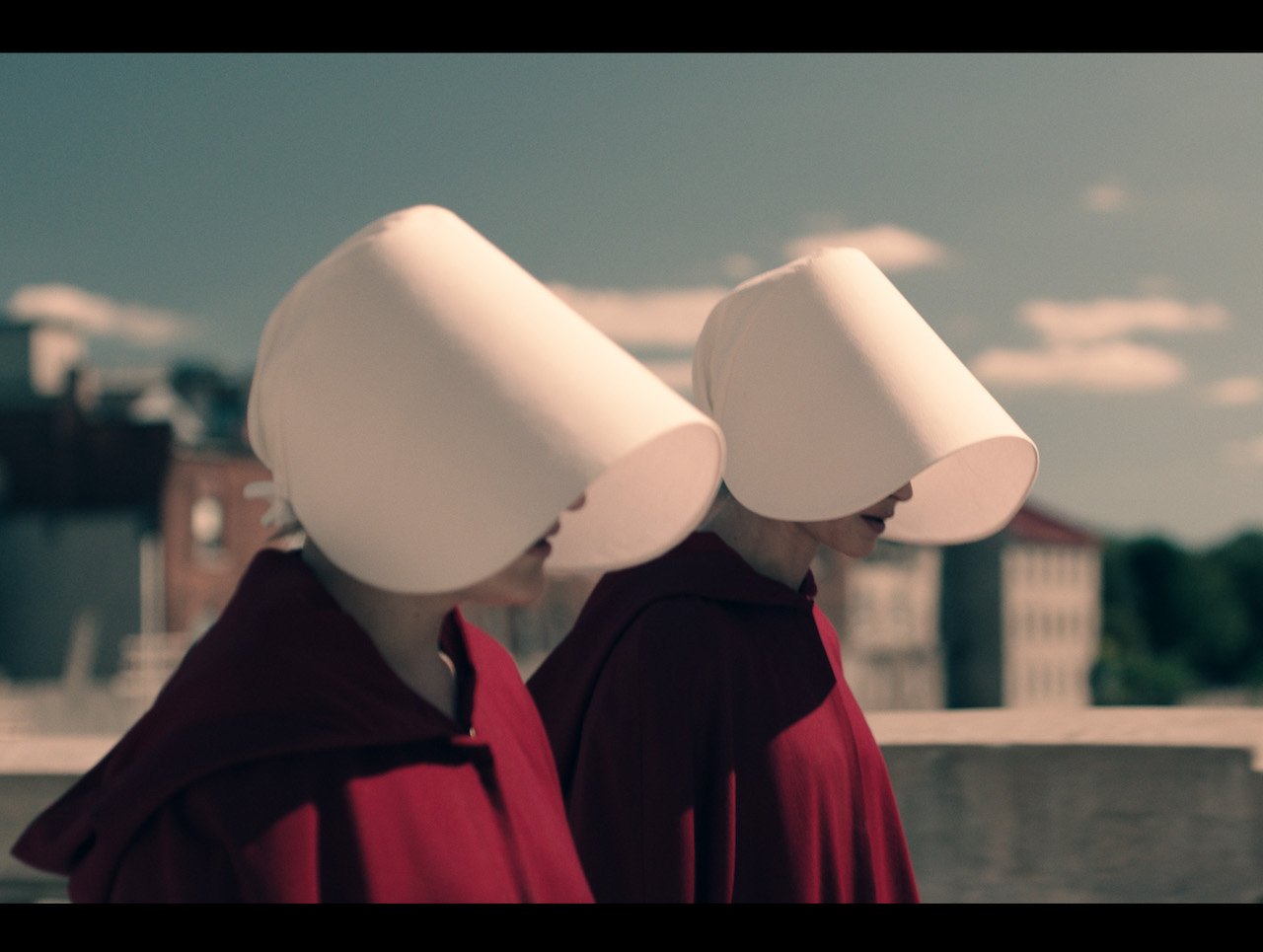 On April 26, Margaret Atwood’s novel The Handmaid’s Tale comes to TV in a 10-part series from Hulu (airing on Bravo in Canada on April 30). All signs point to this being the water cooler/Twitter chatter event of the season, which means it’s time to brush up on the book you probably read in high school. Here, your burning FAQs answered: on the original novel, the current Atwood renaissance and how to sound brainy at your next book club meeting.

Refresh my memory. I seem to remember something about enslaved women in red dresses…
You remember correctly. Set in the fictional society of Gilead, the titular tale takes places after a totalitarian dictatorship has overthrown the U.S. government. Under the new regime, human rights have been scaled way back, and women in particular are denied autonomy, literacy and reproductive rights. Meanwhile pollution and the spread of STDs have resulted in wide-scale infertility. The handmaids (the women in the red dresses) are a group of females who are enslaved and forced to bear children for the wives of the ruling class. 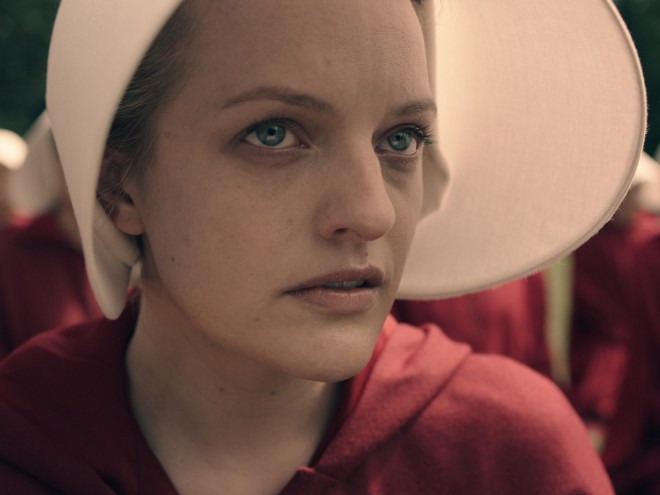 The trailer stars Peggy from Mad Men and Rory from Gilmore Girls. Who do they play?
Elisabeth Moss (the actress who broke out playing Peggy Olsen) plays Offred, the narrator and lead character. Pre-handmaid life, she was caught trying to escape to Canada with her husband and child as the new regime set in. Alexis Bledel (who also had a guest-starring role on Mad Men, btw) plays another handmaid, Ofglen who is a member of the underground resistance. Other key characters include Moira, Offred’s university roommate whose feminism and sexual orientation put her in danger (she’s played by Samira Wiley, Poussey from Orange is the New Black). And the Commander—a high-ranking Gilead leader with whom Offred is assigned to procreate (he’s played by Joseph Fiennes from Shakespeare in Love).

A series based on a Margaret Atwood novel and filmed in Toronto, but no Canadian leads? That’s unfortunate.
Agreed. Though Atwood herself has a cameo, so there’s that. 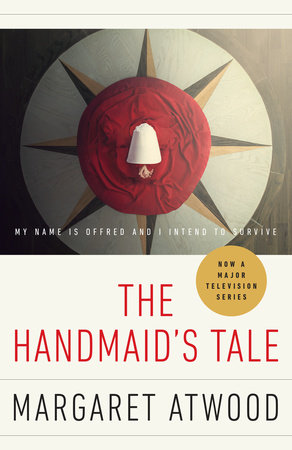 It feels like you can’t swing a dead Cat’s Eye without hitting a new Margaret Atwood project.
Groan. No points for the pun, but it’s true that we are currently living through a modern Atwoodian renaissance. Along with The Handmaid’s Tale, there’s Alias Grace, the author’s 1996 Victorian-era true crime novel, that’s getting the prestige TV treatment (Sarah Polley is directing the series set to air on CBC/Netflix this fall). There is also a CBC series based on Atwood’s kids book Wandering Wenda and Widow Wallop’s Wunderground Washery that premieres this week, a recently announced graphic novel version of The Handmaid’s Tale (publication date TBD), and Atwood’s 2015 satire The Heart Goes Last was acquired by MGM last fall, so that could mean a feature movie. Meanwhile, the original Handmaid’s Tale novel hit No. 1 on Amazon’s bestseller list in February and is currently holding strong at No. 9.

Is it safe to assume Donald Trump is responsible for the renewed interest in all things Atwood?
The Handmaid’s Tale series has been in the works for a couple of years now, which means work on it started back when Trump was still a primary-candidate-slash-professional-punchline. Still, his ascendancy is part of a larger global political trend toward nativism, anti-intellectualism, sexism, racism and so many other isms that pretty much paved the way for President Pussy Grabber as well as Brexit and the current refugee crisis. So no, but yes, and certainly there are many parallels to be drawn between the fictional world of Gilead and the all-too-real America.

Are there really that many parallels between the world of the book and Trump’s America?
Actually, yes. Here are a few you can drop at your next book club meeting:

On a misogynist society… There’s a reason millions of women (and allies) marched on Washington and cities around the world earlier this year: Women’s rights are under siege in America in a way that would have seemed preposterous even a couple of years ago. Emboldened by leader who has bragged about committing sexual assault and discussed the hotness of his own daughter, the government has cut funding to Planned Parenthood and just recently rolled back equal pay measures.

On an all powerful autocrat… In the trailer for the new show, Offred begins, “I was asleep before—that’s how we let it happen.” It’s a comment that probably rings true with the millions of Americans (Trump) and Brits (Brexit) who didn’t see the seriousness of their situation until it was too late. Trump has spent a good chunk of his presidency consolidating power and dismissing dissent (from the press), which suggest he has some autocratic leanings. 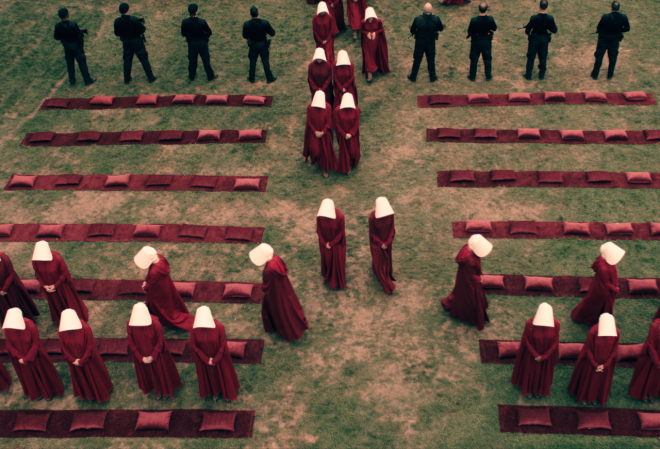 On general bigotry… The governing principles of Gilead are based on an us-vs-them mentality, both internally (citizens ranked based on race and sexual orientation) and externally with closed borders and total insulation from the outside wall. It’s unclear if the Commander wanted to build a wall on the Mexican border, but you get the drift.

On abuse of power… In Gilead, The Eyes of God (“The Eyes”) are the secret police force that rules by monitoring and spying on citizens. Atwood was inspired by earlier dystopic novels like Brave New World and 1984. Presumably, so was Putin.

Sounds like this is probably not a show to watch with family or friends of opposing political stripes.
Or maybe it’s exactly the show to watch with those people. Atwood herself has said that she hopes the novel (and now the series) gets people thinking and talking about the kind of world we want to live in and how our day-to-day actions can have dramatic consequences. And really, if you’re still talking to these people after the election, chances are you can handle a TV show.

Do I really need to read the book or can I just watch the show?
Yes! This is Atwood at her creepiest, most prescient and brilliant. And, also, you should be thankful that your right to read is not being threatened.