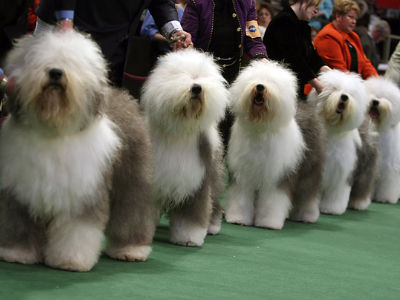 The 135th Westminster Kennel Club dog show took place over the weekend, and a sleek Scottish deerhound named Hickory took home the top prize. Westminster is the Oscars of dog shows, and beautiful pooches and their doting owners descended on New York to vie for best in show. For a gallery of some of the most huggable canine companions on display, click here.

CBS News yesterday revealed that 60 Minutes correspondent Lara Logan was beaten and sexually assaulted while covering the uprisings in Egypt. This past Friday, Logan became separated from her crew in Tahrir Square amidst a celebrating mob of some 200 people. CBS reports she “suffered a brutal and sustained sexual assault and beating” before being reunited with her crew. She is currently resting at home with her family.

Some Canadian celebrities simply refuse to slip quietly into retirement, and William Shatner is just such a celebrity. The iconic 79-year-old Canadian actor will play host at this year’s Genie Awards, the annual celebration of the best in Canadian film. This year’s awards will be broadcast March 10 from the National Arts Centre in Ottawa.

Cycling superstar Lance Armstrong has announced his retirement from the world of competitive cycling. Armstrong won a record-setting seven consecutive Tour de France titles, survived a life-threatening battle with testicular cancer, and influenced the popularity of his sport like none before him. Armstrong previously retired in 2005, but attempted a comeback that never panned out. At 39, Armstrong says the time has come for “Retirement 2.0”.

Jeopardy fans around the world have been glued to their TVs this week, watching as for the first time, a computer competes on the quiz program. “Watson” is a supercomputer engineered by IBM scientists to respond to the complex questions posed by host Alex Trebek on the popular game show. So far, Watson has trounced his human competition, beating past Jeopardy champs Ken Jennings and Brad Rutter. Watson did stumble on one Canadian themed question, though, answering erroneously, “What is Toronto?”