The collarbone challenge: yet another way to glorify thinness

Girls and women are stacking coins atop their collarbones to measure how skinny they are. Sound silly? It's not. 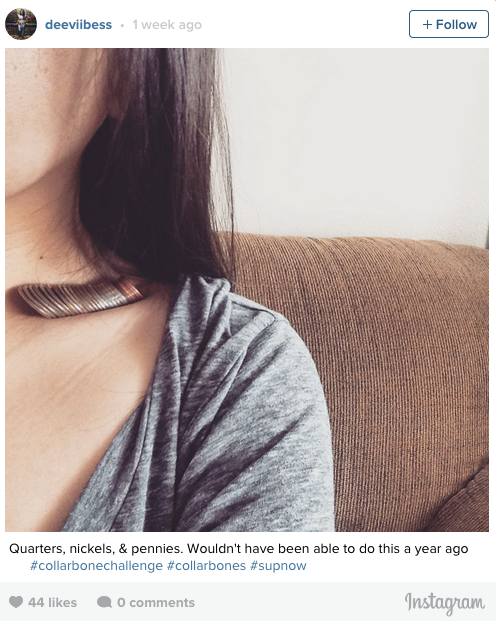 If you haven’t been sucked into the latest social media craze designed to promote body image nutsiness, then allow me draw your attention to “the collarbone challenge.” The idea is to stack as many coins as possible into the hollow of your collarbone — the more coins, the skinnier you are. But the bigger point? To isolate a weird and random body part that you probably have never thought about before and turn it into something to obsess over. In the otherwise cheery aspirational world of Pinterest, there are boards devoted to collarbones, and web forums where users swap tips to make them more prominent.

The collarbone challenge follows other oddball stunts like the “belly button test” (can you wrap one arm around your back and touch your navel?), the “bikini bridge” (when you lie on your back, is there a valley between your hip bones?) and the infamous “thigh gap” (is there a triangle of space just below your pubic area when you stand with your feet and knees together?). These silly-sounding memes which have no medical legitimacy as a measure of thinness or fitness or health, might be written off as jokes — in fact, the bikini bridge turns out to have been a hoax — if not for the sheer numbers of young people buying into them. In China, where the belly button challenge began, girls have posted selfies of their attempts, and speculating that their failure is due to not being skinny enough.

These strange fads and “thinspo” websites that fetishize the dangerously underweight wouldn’t have such currency if the broader culture didn’t already reduce regular, functional women’s bodies to problems that must be fixed. This time of year makes matters worse, with the period between June and September dubbed “bikini season” rather than good old-fashioned “summer.” Language like that creates an ambient pressure on women to reach a physical ideal that is exhaustingly and damagingly elusive.

Let me fess up: I’m a fortysomething feminist who has worked very, very hard for many, many years to ignore the messages telling me that my worth is gauged by the size of my clothes. Mostly I’m perfectly happy with who I am and how I look. Still, every year as the weather gets warmer and clothing gets skimpier, I feel a momentary sense of shame and regret that I have once again failed to whip my curvy body, with its cellulite and stretch marks, into what I imagine would be flawless obedience. 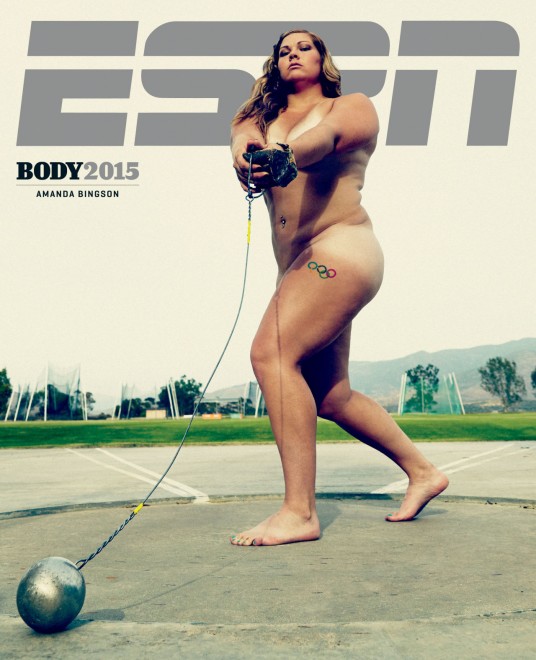 That’s why I love Nicole Cliffe’s mini-masterpiece Getting the Body You’ve Always Wanted from the website The Hairpin for sending up the idea of a “perfect body” for the absurdity it is. And Veronique Hyland’s advice on How to Get Your Body Caftan-Ready for Summer (which includes the tips, “Throw out your razor” and “Throw out your bra”) might be one of the best cool-girl push-backs to the imperative that your body is to display rather than enjoy.

Even cooler is the inspiration from track and field hammer thrower Amanda Bingson, one of the athletes featured in ESPN the Magazine’s annual Body Issue. Bingson, who weighs between 210 and 215 pounds and describes herself as “dense,” appears on one the issue’s six covers naked, strong and beautiful. “I’ll be honest,” she says, “I like everything about my body.”