The Chatelaine Q&A: Samantha Bee, the only woman in late-night comedy

The Canadian entertainer and author spoke with editor-in-chief Lianne George about her plans to infiltrate the male-dominated time slot. 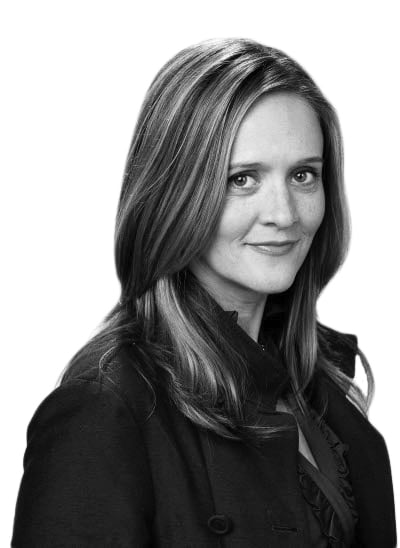 Based on her track record on The Daily Show, her laugh-out-loud promo calling out the boys’ club in comedy and the fact that she’s also an executive producer on the show, we’ll definitely be tuning in to see what she’s whipped up. Bee, 46, has  said the show won’t take a traditional late-night format — it will be closer to John Oliver’s style, covering current affairs while promising to stab “injustice with the hot poker of comedy.”

Toronto-born Bee has gone from playing Sailor Moon in a live production of the children’s show in the ’90s to writing two books, headlining her own show and co-creating a sitcom for TBS along with her husband, fellow Daily Show alum Jason Jones today.

She spoke with Chatelaine editor-in-chief Lianne George last summer about what it was like to be the only female correspondent on The Daily Show, her plans to infiltrate late-night talk, and the next frontier for women in comedy.

Your promo ad was amazing. How did the sausage fest motif come about?

We knew the upfronts were coming up and you have to have something to say about the show. It’s an event that generates a lot of excitement for the new shows, the advertisers, the whole thing. I kind of thought, “Should we do a promo for the show? We don’t even know what it’s called yet.” But we thought it was a good idea and I thought, maybe we should hit the sausage fest [idea]. I actually sat down and counted the number of male late-night talk show hosts and it’s like 14 of them, or maybe 15.

I don’t know that I can think of one reason. I don’t think that there’s a secret cabal of people trying to prevent women from taking those positions. I just think it’s kind of borne out of a traditional way of doing things. It continues in that vein until someone has a great idea to do something new. That is happening. It’s not like there’s never been a woman in late-night. But it’s definitely dominated by men. It’s incredible when you really sit down and bring up a headshot of at all of those 14 or 15 guys. You just go, wow. So then I thought, well I guess it is a sausage party. So it was a very organic idea.

Will you be in character for your new show or is this you out there?

I’m in such a weird place because for so long on The Daily Show I just used my own name. But it really wasn’t like me personally [to be] so aggressive. There’s an exoskeleton that you put on a little bit. It blurs reality when you use your own name. But I don’t intend to do it as a character in the vein of what Stephen originally did with his character for The Colbert Report. I really hope that it’s going to be more of a distillation of the things I’m really interested in. Towards the end [on The Daily Show], I really only chased pieces that were important to me. And there were many, many stories that I did want to chase that just didn’t really fit with what we were trying to do as a show.

So more like John Oliver — tackling big important issues through a comedic lens?

Yes, that is exactly what I have in mind and there is a huge part of me that is purely comedic. That is really the essence of what I like to do. If there is no comedy to be found in it, I’ll do my best to find the comedy and if there isn’t, I probably won’t do the story.

People still talk about the Christopher Hitchens essay from 2007, about why women aren’t funny. The attitude expressed in his piece — is that something you experienced coming up? That women have to work harder to prove they’re funny?

I think in comedy, male and female alike, you’re constantly trying to prove yourself. Coming up in comedy as a newcomer is equally tough for everyone. I don’t come from a stand-up background so in many ways, I bypassed all of those hazards because I never did stand-up so I didn’t have to fight for stage time. I did comedy with an all-female sketch troup and we just rented space ourselves and put on our own shows, you know?

I think the acting world is much tougher on women than the comedy world. The comedy world you write your own stuff, you do whatever the f- -k you want. You go onstage and you make a show and you hope people will come and you can be creative. If you’re an actress and you’re serious, well you know, you turn 42 and suddenly you’re 20 years too old to play Tom Hanks’s wife. I go up onstage and do speeches from time to time, not very often, and I introduce myself as the woman who is 30 years too old to play Al Pacino’s wife. And I think that’s true. In comedy, you can kind of write your own history. There are so many opportunities now and I don’t really know why, but there should be.

I agree. It’s genuinely funny. It genuinely speaks to us and I think it’s borne out of that idea that when you write for yourself and when you carve that niche out for yourself — which I guess in a way is feminist as well — whether you are successful or not, you are completely taking charge of the most important part of your creative self.

I will say one thing—and maybe further to that point—the next frontier in female comedy is comedy about people who are over 40 or over 45 because that’s an uncomfortable place for people, believe me. I’m not seeing a lot of that. If we’re talking about women and comedy, the next frontier is accepting that a woman other than Joan Rivers can be funny in her 50s. That idea has not really taken the world by storm.

Related: How does Amy Schumer get away with it?

Do you think there’s a relationship between anxiety and comedy?

I do. Comedy gives me anxiety but I think it gives me almost less anxiety than anything else that I do. For me, I think doing comedy and being funny comes out of a desire to fit in. I never felt like I fit in. Never. I still don’t. I’m not really that great socially. I like things in small groups. I don’t have a huge wow factor. I get really nervous at parties and my conversation skills just dry up. That feeling of wanting to fit in is something I have felt so acutely in my life and the only weapon I had in my arsenal in some ways was to be able to make people laugh, off to the side. It was my weapon of choice. I’m not a great beauty. It was my wit that got me through.

What was it like to be the only female correspondent on The Daily Show ? Did you have to take different tact?

No, not at all. I was just trying to be funny. The tactic I chose was, OK, this is an opportunity. I’m terrified. Jesus Christ, what do I do? Then I thought the only thing I can do is make myself indispensible. Just be as funny as possible. That’s all. Work hard, head down. I didn’t really arrive at that job with something to prove. I just wanted to do a good job.

Your persona on The Daily Show was tied up in being willing to come off as rude, arrogant or ignorant to get a laugh. It was even funnier coming from you because so rare we see that from a woman.

I’m not afraid to get ugly. I think that comes from my Canadian work ethic. I’m only half-joking, but I’m not really joking. It comes from a place of just wanting to execute the best possible joke in the moment, whatever it takes. What’s the funniest thing I can do? Oh, that’s awful. OK, that’s it. I’ll do it. Oh my god, I can’t believe I’m doing it. OK, it’s over.

Related:
Mindy Kaling farts, and you should too
Samantha Bee tried it: rompers for grown women
Goodbye to David Letterman, one of TV’s biggest flirts