On being the First Grandma of Canada, finding purpose in work and the joys of being a perpetual teenager. 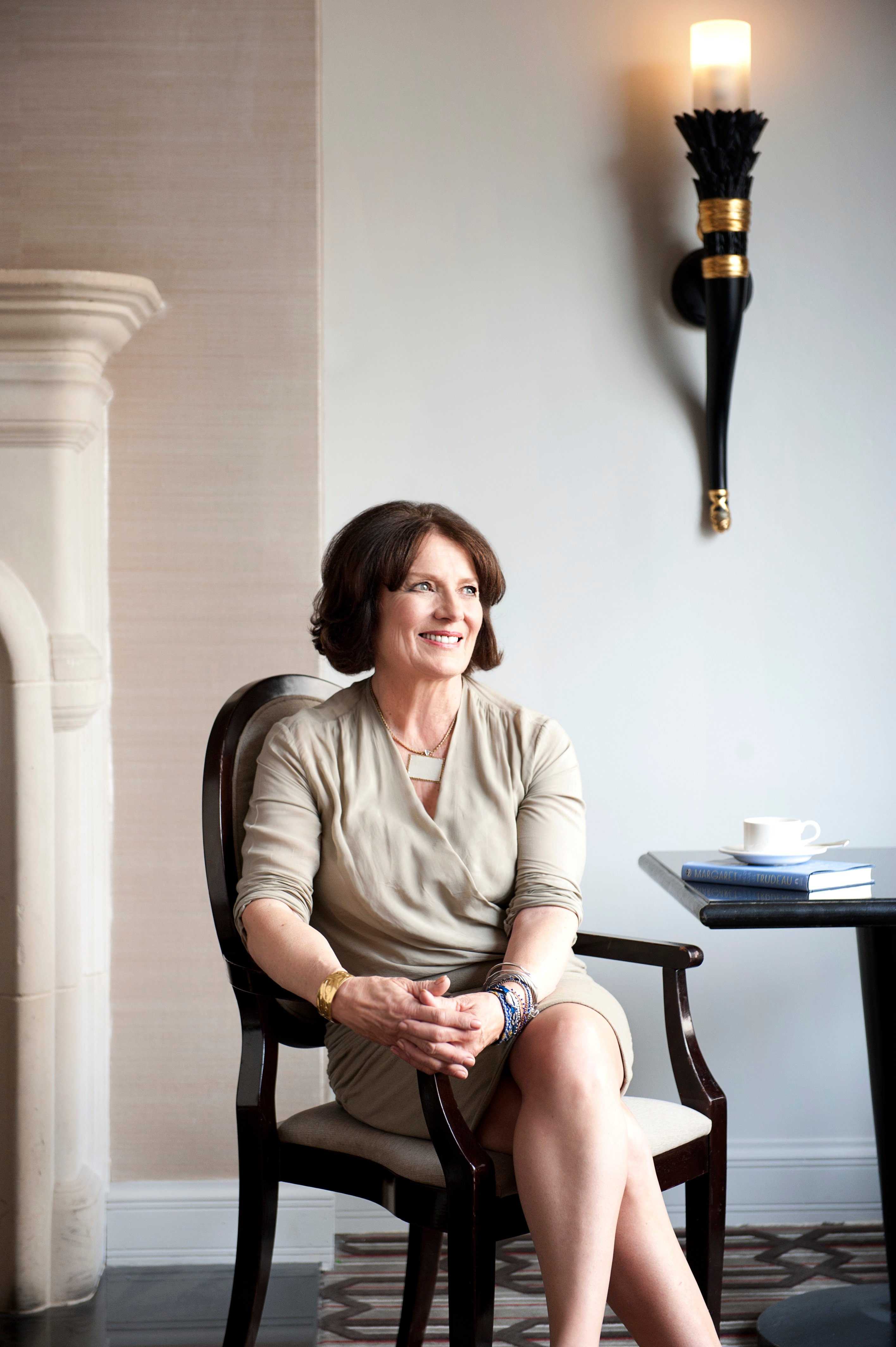 In her own words, Margaret Trudeau has seen the best and the worst of what life has to offer. She’s “danced in the arms of presidents, dressed in haute couture and [been] confined in a psychiatric institution, [her] bank account — and life — in shambles.” But what might be her most unbelievable story doesn’t take place during the high highs of her jet-setting flower child days, or the low lows of her desperate struggles with mental illness. It took place this week.

In 1971, 23-year-old Margaret Sinclair married Pierre Trudeau, the man who would become the Canada’s 15th prime minister. Later that year, she gave birth to the man who, in 2015, would become its 23rd. But Margaret is much, much more than a political wife, once hounded by a Canadian media who giddily chronicled her every move. She’s a speaker, a celebrated author and an inexhaustible activist for mental health and clean water. We spoke to her about the ways in which Justin takes after her and Pierre, how she found herself in philanthropy and why Canadian women rock.

There’s a Chatelaine cover from 1972 that shows you snuggling baby Justin. Then there you were on the front of Monday’s Globe and Mail doing same thing — this time, to the prime minister–designate. You’re the only Canadian who’s able to say they’ve married and given birth to a prime minister. Does that strike you as strange at all?

Yes! Me and [former American First Lady] Barbara Bush, we have something in common. Married to and mother of. I’ll have to go and get nice big, white pearls in her honour. 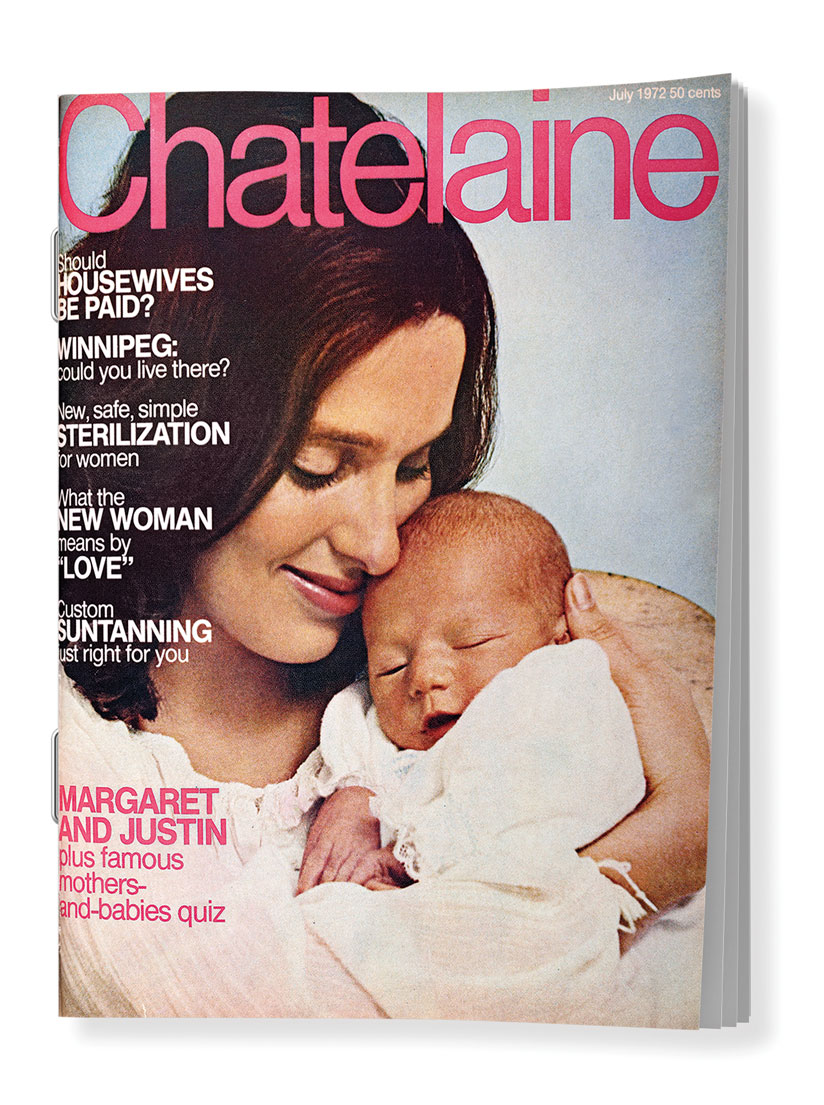 Margaret and Justin Trudeau on our July 1972 cover.

You famously called 24 Sussex Drive “the crown jewel of the federal penitentiary system.” And now you’ve got to go back there for, say, Christmas dinner. Was part of you wary at all? Like, “Oh no! Not this again!”

Of course, deja vu all over again! Sophie, now, is protected 24 hours. She can’t go out on a walk, down to the grocery store. She can’t just get on her little scooter and buzz off, as she always does. The security means you’re being watched all the time. That’s not a normal thing for a human being, to be constantly under observation. But Sophie is in such a different place in her life than when I became the wife of the prime minister; I was sort of plopped in without any preparation, not knowing my husband’s work — anything, really. It was so daunting and overwhelming for me. But Justin and Sophie have had a very good marriage and are on the same path. They’ll love wherever they are.

You’ve spoken very candidly about your own history with bipolar disorder, and one of the promises of the Liberal platform is strengthening access to mental health services. The order of the day for this campaign was comparing Justin to his father, but do you see your influence on his politics as well?

His father has been gone, unfortunately, for the last 15 years, when Justin’s been building himself into this extraordinary parliamentarian. Pierre missed that part of it, but Pierre was prime minister until Justin was 13. He was totally influenced by his father, and his father educated him so, so well. But certainly the work that I do and the focus of the Liberal campaign are completely in sync. I’ve been doing my work as a mental health advocate for the last eight years, criss-crossing the country. Small towns, big cities — they’re talking about mental health. The stigma is being beautifully broken down: People are losing their fears of getting a diagnosis, and facing the idea that they have a mental illness. I’m so filled with hope — no, confidence — that it’s going to change.

You were the honorary president of the charity WaterAid — that seems like a bit of a gear shift.

Water comes first! My passion for clean water came to me when I was Pierre’s wife, when I was part of an United Nations conference. I got my marching orders from great women — Barbara Ward and Margaret Mead. My working in water helped me more than anything else I did because it was consistent. Even through my terrible times after my son died, when I went just mad with grief, the community I had at WaterCan was my support outside of my family. Purpose is the one thing that will get you out of all your mental pain and anguish. When you’ve got a reason to get out there and work, everything falls into place.

A lot of people are hopeful about the progressive changes the Liberals are promising — a half-female cabinet, for example. But a lot of people also say, “How much change is going to happen? Politics is politics!”

I do believe change can happen. [When people say], “Isn’t this good enough?” — that’s the whole message of Justin. No, we’ve got to work on it. We’ve got to be proactive and listen where the help is needed most. One of the obstacles for Justin is that the world is kind of a mess right now. We’re very blessed in Canada that we have peace, but we have to be better than what we’ve been showing ourselves to be. Canadian women rock — we have huge hearts, we are intelligent and we will get it done. So let’s do it. 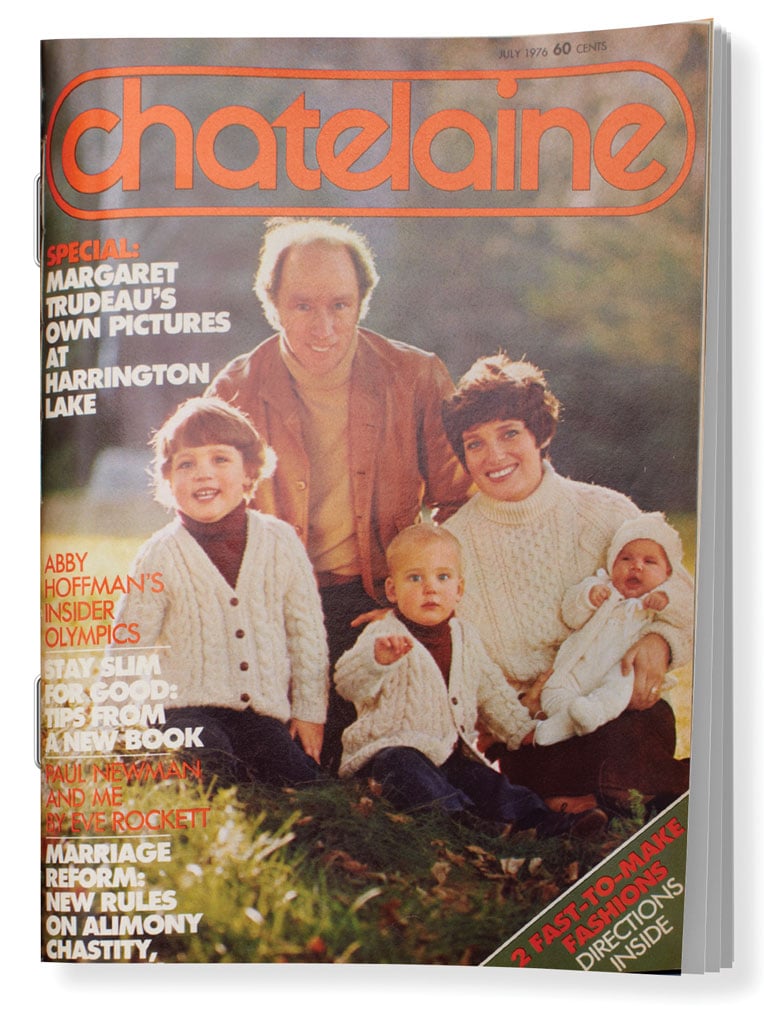 The June 1976 cover of Chatelaine featured the Trudeaus at Harrington Lake.

You’ve really “been there, done that” with this whole prime minister thing. What are you most looking forward to as the First Grandma of Canada?

[Laughs]. Everyone talks about the pomp of 24 Sussex, but to me, Pierre and the children, our life was at Harrington Lake [the country residence in Quebec for prime ministers]  — a beautiful, big cottage. You’re free up there. The paths that we walked, the canoeing — I just can’t wait to be part of that again as I was with my boys and to see my grandchildren playing. The true gift is having true privacy to enjoy nature, which our family loves the most.

That’s so Canadian, too.

I know! I just like to play with the kids, whatever we can do to laugh. Of course, I’m childlike — a perpetual teenager.

Thanks so much for your time, Margaret. I know you’re probably really busy lately.

Actually, I’m at a Best Western in Woodstock, New Brunswick. A local girl has just done my hair; I’ve got a big event tonight. I’ve got a schedule of my own that I’ve always had. Now it’s Justin and Sophie’s turn to have that life — I’m just gonna be Grandma.