In a new internal memo, the national broadcaster advises its journalists against engaging with FHRITP trolls. Hmm. 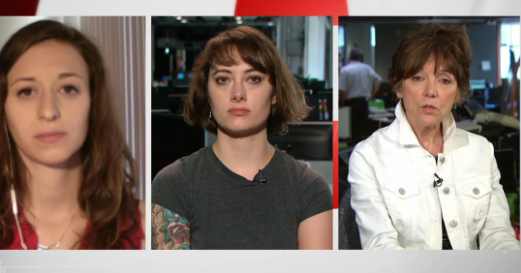 By now, I probably don’t need to explain what “FHRITP” stands for. By now, you are probably as sick of that acronym as the phenomenon itself. Sadly, the misogynist’s meme-of-choice is still going strong — so strong, in fact, that the CBC recently felt compelled to issue an internal memo instructing staffers on how to deal with “determined attackers.”

According to VICE, the broadcaster has advised journalists not to “engage the abuser” to avoid escalating the situation. “Your safety is paramount,” the memo reads. “And it’s hard to predict how individuals might react to words or gestures which could be seen as provocative.” In addition, CBC’s top brass has cautioned against shaming the FHRITP-shouters on social media (a.k.a.: Tar-and-Feathering 2015), and suggests standing next to nearby police officers to deter any shady or aggressive behaviour from bystanders.

As a highly visible, publicly funded workplace, the CBC has an understandable interest, if not obligation, to address a frustratingly popular trend that hinders the ability of its reporters — usually female ones — to do their job. (In fact, in May, The National devoted prime air-time to the ongoing harassment of its female journalists.) Of course the company is going to advise their employees to avoid confrontation — any other recommendation would be a gross liability. And remaining silent on the issue would be irresponsible.

But for female reporters who endure harassment day after day and are, frankly, sick to death of it, remaining silent is toxic. The CBC’s guidelines may be well-intended, but they demand a social complacency that is becoming increasingly outmoded. “No” can no longer be considered “provocative”; it is necessary. It’s also effective: Remember Shauna Hunt, the CityNews reporter who called out her assailants on camera? She got justice, and fast: one of those FHRITPers was swiftly fired from his job and banned from future MLSE-sponsored events.

I am not blind to the risks associated with speaking up — for women, fearing recourse for simply asking to be treated like human beings remains an unfair, infuriating reality. But deciding how to deal with one’s harassers should ultimately be the choice of the harassed. On the one hand, the CBC is right: “No story is worth getting hurt.” But staying quiet? That hurts, too.

Related:
CityNews’s Shauna Hunt confronts sexist jerks on air
Shout “FHRITP” at me and, yes, I will tell your mom
The National spotlights sexist attacks on female journalists