Yesterday for work, my unit went up to visit the Canadian War Museum. I was awed by the sacrifice our soldiers have made and the fantastic way in which the war museum has presented it. And then I saw my Dad's own part of history and the awe only continued. 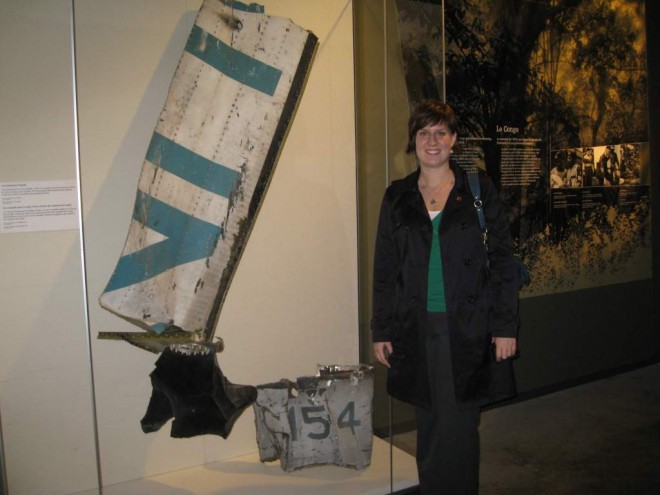 If you haven’t been to the Canadian War Museum, I suggest you plan a trip immediately. It’s hard not to be overcome with emotion when you’re faced with that kind of starvation, pain, torture, and human brutality. Often, it’s scary what man can do to other man.

But what’s also amazing is what man does for other man. We give our lives. We fight in terrible conditions. We have empathy, caring, and consideration. Humans are such miraculous and complex beings.

What made my trip to the war museum even more amazing was a chance to walk through the Peacekeepers section, as that has been a major part of my family’s history. I strolled through the Korean war section, wondering if I was looking at any long lost photos of my grandfather at the tender age of 19. I touched the photos of those who looked like they had lived lives filled with so much pain and wondered if the Canadians had any part in making those lives a little less horrific.

Then I came to a piece of carnage that I was aware was intertwined with stories my Dad has told me. I was aware that on 9 August, 1974, we lost 9 peacekeepers, the single greatest loss of peacekeepers in one day, when a Buffalo plane was shot down by a Syrian missile. What I’m even more aware of was that on that day, my dad was meant to be on that plane but he hates to fly and chose to drive instead. My life would never have begun and his would have ended far too early.

My Dad was one of the first on the scene and had to recover a piece of the plane (the details as to why aren’t entirely clear to me). And now, that piece of plane sits in the Canadian War Museum, as seen in my photo here. My Dad, this part of history forever.

I’ve always been proud of the sacrifice my Dad made, and today, with soldiers dying in Afghanistan, we forget that peacekeepers weren’t surrounded by peace and they served in the military at a time in which there wasn’t the kind of civilian support for our forces as there is today. They survived very difficult times in very dangerous environments and I’m proud my Dad was a part of that.

On the roof, the windows of the museum are set out in Morse code. The roof reads, “Lest We Forget”. Dad, I have never forgotten your sacrifice and the sacrifices of those who served with you and after you. And every time I see that piece of plane, I’ll be proud. You are part of Canadian military history. And even though it may seem small to others, never forget how big it really was.