Modern Lovers is your summer must-read

Emma Straub's latest about well-to-do New Yorkers trying to navigate parenthood, friendship and romance will charm its way into your beach bag. 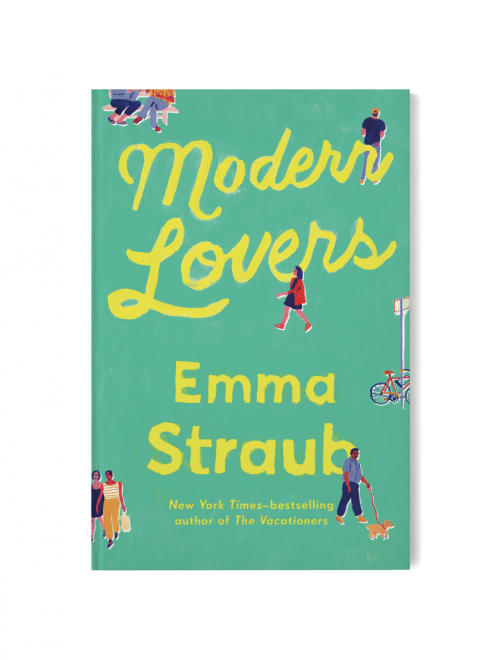 The cosmic joke fuelling Modern Lovers, Emma Straub’s meringue-light new novel about intertwined families in hip, gentrifying Brooklyn, is one of timing. The muddle and mayhem of mid-life have struck two sets of parents just as their children are pitching a rebellion of adolescent angst. That’s a lot of trouble brewing under two neighbouring roofs, no matter how Pinterest-worthy the interior design.

The domestic Sturm und Drang of well-to-do New Yorkers is familiar terrain for Straub, author of the romcom-ish bestseller The Vacationers. In Modern Lovers, she has great fun capturing the class and generational markers that define the lives of Elizabeth and Andrew, a long-time couple who met at crunchy elite Oberlin College; Zoe, a glamorous lesbian who used to play with the pair in a grunge band called Kitty’s Mustache; and Jane, a prickly chef and Zoe’s wife. The quartet have shared much of their adulthood, even settling down on the same block  and sending their kids to the same  private school. In the increasingly overpriced neighbourhood of Ditmas Park, Straub delightfully — but gently — sends up a variety of New York Times Style section mainstays: boozy book clubs, messiah-like yoga teachers, anxious helicopter parents and real estate obsessiveness. She brings an equally mischievous eye to flashbacks of Kitty’s Mustache’s heyday. Readers old enough to have a flannel shirt and a pair of Doc Martens in the back of your closet, prepare to cringe.

At the core of the group is the intense friendship between Elizabeth and Zoe. While Zoe is a bit of a cipher, Straub imbues Elizabeth with a recognizably complicated mix of feelings about her best friend: She adores Zoe but also resents, judges and envies her. Former roommates and daily confidants, they’ve been pushed out of sync by the shaky state of their own marriages. Elizabeth is burnt out from her grind as a realtor and frustrated by Andrew’s aimlessness. Meanwhile, Zoe and Jane seem unable to resuscitate their relationship from the throes of lesbian bed death.

Adding to the strife is the budding romance between Elizabeth and Andrew’s straight-edged teenaged son, Harry, and the more worldly Ruby, daughter of Zoe and Jane. Then a producer arrives from Hollywood looking to make a biopic about a ghost from the past: Lydia, the lead singer of Kitty’s Mustache, who died of an overdose shortly after going solo, taking with her the band’s only hit. And so, as the parents struggle to accept their children’s impending adulthood, they must also reckon with the thorny bond of their own shared history.

The novel flicks at hot button issues like teenage sexuality, infidelity, racism and depression, but Straub seems more interested in a bouncy plot than in social commentary. That means lower stakes and less payoff — it’s not a spoiler to say that a happy resolution is all but guaranteed. Still, Straub provides enough wit and warmth to give Modern Lovers an appealingly old-fashioned heart.