The bad news about being a bridesmaid

The first thing I do when a good friend tells me she’s getting married is to offer my congratulations. Then I let her know that I have absolutely no desire to be her bridesmaid. 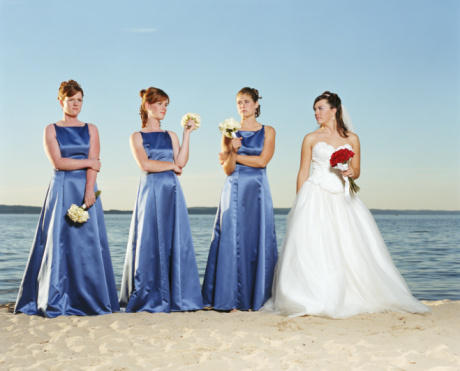 The first thing I do when a good friend tells me she’s getting married is to offer my congratulations. Then I let her know that I have absolutely no desire to be her bridesmaid.

This is terribly rude behavior, I know. But I don’t care. Past experience has made me militant.

According to a 2009 survey by the Wedding Report, which monitors consumer trends for the industry, a bridesmaid can plan to spend a little over $1,000 on the whole shebang, from the dress to the bridal shower, to travel and the wedding gift.

To some, that figure may sound high, to others fairly reasonable. But to the woman who is trying to figure out how she’s going to pay for those rhinestone-encrusted satin pumps her bride insists on and still make rent it’s just too much.

One former bridesmaid found herself being shaken down at a bridal shower/bachelorette combo.  “I was told I owed the maid of honour more than $400 (not including the gift) for various items including a stretch limo and stripper that we hadn’t discussed.”

She didn’t cough up the unexpected increase, but she did pitch in. “After an awkward discussion in the adjacent room, I handed her what I had budgeted and not a penny more.”

If only I’d been so courageous. During one of my bridesmaid stints, I (foolishly) went along with the bride’s every whim because I didn’t want to look like a jerk. She insisted we get our hair and makeup done (at our expense), she insisted we buy the same accessories (in addition to the dress and shoes) and then there were showers (yes, more than one), and hen nights to pay for. The morning after the wedding, I felt as if I’d been robbed by a conman in a veil.

Weddings are getting more expensive for the wedding party. The popularity of destination weddings only inflate the cost to guests, and brides are getting nervier in their demands. A friend of mine recently told me that her bride insisted on “cash only” gifts and set a minimum of $200.

Now, here’s a proposal for bridesmaids to consider: if a bride has the nerve to insist on a gift-giving minimum, isn’t it only fair that bridesmaids get to impose a maximum on how much they’re willing to spend to play lady-in-waiting?