The apology generator for dummies

I’ve received many kudos for my book How to Raise a Boyfriend from women (and some men) who now understand why they are clueless when it comes to basic etiquette in relationships. But many men have complained about women complaining about them. 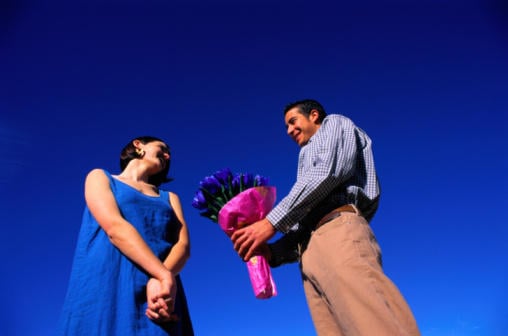 I’ve received many kudos for my book How to Raise a Boyfriend from women (and some men) who now understand why they are clueless when it comes to basic etiquette in relationships. But many men have complained about women complaining about them.

One of the things bothering me recently is that I have yet to fight with my boyfriend. On the book’s website, I even have a ticker clock showing visitors how many days I have gone without fighting with him. We are at 131 days.

You may say that this is great! I should be happy! And maybe it is great and I should be happy. But for super-neurotic me, to not fight about anything in more than four months is completely weird. I’m so used to arguing with boyfriends, so I’m freaking out about our first fight, which hasn’t happened yet. Help!

I’m mostly concerned about how my guy is going to make it better if/when we do fight. I know, I know. It sounds ridiculous. But as I say in my book, I’m the kind of girl who needs a really good apology, and I do think the first fight will be his fault. (Ha!)

Many men just do not know how to apologize. They’ll huff, “Well, I’m sorry then.” Or they’ll grudgingly say, “I’m sorry you feel that way.” Both are so not apologies.

What if my guy turns out to be a bad apologizer? What if he’s the type who refuses to ever apologize? That would suck!

I was thrilled when I learned of a man in Montreal who agrees that many men suck at apologizing. Jonathan Brun founded Make your Girlfriend Happy. Not only does this site give birthday and anniversary reminders for the woman in a man’s life, it also has an “apology generator.”

I tried this for fun. It asks what your girlfriend’s pet name is, how much you love her and what you did wrong, then requests three things you like about her. All you have to do is type in the answers and an automatic apology letter is generated for you to email off to your girlfriend. It’s brilliant!

Here’s what came back, after pretending to be my boyfriend, who did something bad (which I made up).

“Let me begin by saying that I know this letter will not excuse what I’ve done. I am prepared to do whatever it takes to earn your forgiveness.

“I love you so much. I never meant to hurt you and I cannot express enough how awful I feel right now.

“I am sorry for having hurt your feelings. Please know that my utter lack of judgment and immense stupidity are by no means a reflection of my feelings for you.

“It is my hope that you will find this letter to be a reassurance of my respect and admiration, which grow more and more every day we’re together.”

Now that is an apology! And who says computers aren’t smarter than people?

I talked with Brun about how hard it is for men to apologize and why he thought an “apology generator” for men was needed.

1. It’s not just guys: He says that while he thinks men are bad at apologizing, “most people” are — or at least offering an “earnest apology.” “Most men just apologize to get out of the dog house, not because they sincerely believe they did something wrong,” he says.

2. Learn from him: The idea for the “apology generator” (and the site) came after a painful breakup with a girlfriend. “I wanted to avoid the same mistakes I made in that relationship. The site is designed for men, to help them with these small acts of kindness, like apologizing.”

3. One step at a time: So, was he a bad apologizer? “I got better with time, but it wasn’t good enough.” He hopes the “apology generator” will kick-start men when it comes to apologizing and says they should follow up the computerized note with flowers or a romantic dinner. “There’s a lot of hopeless guys out there.” (Who should also be reading How to Raise a Boyfriend!)

4. Send the link along, ladies: Although the site is geared towards men, he hopes women will direct their men to their site, or even sign up their boyfriends. (It’s free.) I’m not sure I’d want to know that my guy didn’t write the apology letter on his own, though I suppose a computer-generated apology is better than nothing!

5. Get a woman’s touch: Though they are computer generated, the automated responses have been written by women. “Women know what women want to hear,” he says. And, yes, he is now in a new relationship and would use the apology generator himself. “I think I would use it, when I get into a fight. And maybe use it more than once,” he laughs.

So it’s not just us woman who think men suck at apologizing — apparently even men know it. At least one of them is doing something about it.