We all have unforgettable holiday memories. Here are some of yours... 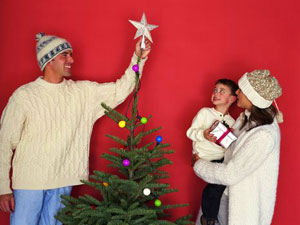 We asked about your wacky family traditions, moving memories and can’t-believe-it-happened-to-me tales, and boy did you tell us! So grab a glass of eggnog and settle in for some heart-warming and hilarious holiday reads.

When my daughter was five (she’s now 28), we set aside one day to make Christmas cookies. We hauled out the recipes, assembled the ingredients and poured eggnog for leisurely sipping. She measured flour and cracked eggs, stirred batter and rolled dough in chopped nuts. While waiting for cookies to bake, we danced to Harry Connick Christmas songs.

Over the years, we have invited various friends to “help” on Cookie Day, sometimes inviting whole families to join our family in cutting, rolling, sandwiching and decorating. One year, after my friend’s young daughter Tiffany put the finishing touches to her cookies, she announced, “Mommy, this was the mostest fun I ever had!”

The virgin eggnogs of my daughter’s tween years have given way to bottles of Jackson Triggs red, but we still hold our annual Cookie Day, we still dance to Harry Connick and we still think it’s the mostest fun.
McTaggart, Toronto, ON

The year my husband stole a Christmas tree

This was 1968, we were living in Quebec and our children were four and three years old – very sensitive ages as far as Santa is concerned. I was a stay at home Mom in the deep, deep suburbs and I did not have a car. My husband was starting a new job as an engineer with a big company and he was too busy to get a Christmas tree. Every night after work he would show up for dinner without a tree and the children and I would just stand there and pout. So I decided to throw him a curve ball by inviting his sister and her boyfriend for Christmas Eve. If I get his family involved it will become a big deal, I thought. He kept saying not to worry, that there was plenty of time and plenty of trees everywhere! Next thing we know, it’s Monday December 23rd and there’s no tree. Then, on Christmas Eve, he comes home late after an office party with the most pitiful tree I have ever seen. A real Charley Brown tree. But the worst part was that the tree corral was closed when he got there and he had to climb over the 8 foot fence and steal one of the very last trees left inside. He knew he could not come home without one, even if it killed him. Needless to say, 1969 was the first year we had an artificial tree.
Louise Bonneau, Calgary, AB

One year, when we lived in British Columbia, we came home for Christmas in Ontario at my brother’s place. One evening, when the whole family was together, I came out of the bedroom and stood beside my husband. Since his back was to the wall I reached around and playfully squeezed his butt. Just then I looked across the room and saw him talking to my sister in law. I looked beside me and it was my dad! Boy was my face red, and boy did he look shocked! That Christmas was very memorable, just not the way I would have liked. (Good thing dad had a great sense of humor!)
Ellen Pruim, Stratford, ON

Christmas has always been a special time for me. I can’t wait to get out the decorations and start to prepare (usually in mid November). One of my most special decorations is a nativity scene my husband gave me many years ago. He then made me a stable for the characters. Once the nativity scene is in place I know the holidays have started. When my nephew JR (now 25) was about four years old he came to visit one day a few weeks before Christmas. When he walked into the living room and saw the nativity scene, he turned and said in a voice full of awe: “Oh, Aunt Joan, you’ve got God in your house”. Every year since then I think of JR’s awe as I set up my nativity scene. What precious words from the mouths of babes. Joan Taylor, Ilderton, ON

The joy of giving

One year I decided to hide one of my son’s, who was nine at the time, gifts in the front hall closet because it was the one place I didn’t think he would ever look. Well I was right and wrong at the same time. He was looking for his favourite toque, and lo and behold, what did he come upon? Yep, his gift! I just happened to come into the room at the same time and the look on his face was priceless. I don’t know if he was more surprised to find the gift when he wasn’t actually looking for it or that I happened to enter the room at that precise time and caught him. I felt so bad for him as I knew what really happened. From then on I hid things in the crawl space under the eaves with a lock and key. Oh, and kept the key with me at all times.
Carolyn McLean, Sarnia, ON

I was 20 when I got married to my best friend (Oct. 1989) and had just turned 21 when I found out we were going to have a baby (April 1990). I wasn’t due until mid January 1991. Well, to our amazement our baby boy decided to make an early entrance and I had our son by c-section on Christmas morning 1990. He will be 16 this Christmas…not a little boy anymore. I didn’t get Christmas dinner that year, but I did get and give the best present any parent could ask for.
Cindy Mellow, Leamington, ON

Vino and the bambino

My family and I established the tradition that on Christmas eve we would have a meat and cheese tray and a splash of wine as we opened one gift. We started this tradition when my son was in grade one. We felt that a half a glass of wine to celebrate Christmas eve was not a bad thing. Imagine my surprise when my son’s homeroom teacher called me in for a meeting. My son went back to school in January and wrote in his journal that he got drunk on Christmas eve because he drank a bottle of wine. She told me that she had to speak to me because she had to report abuse and wanted to give me a chance to explain. We both had a laugh regarding my son’s version of the evening. Yes we still carry on this tradition and my son is now 25.
MJ Good, Yellowknife

In 1962 my Church started its tradition of having a little girl walk down the aisle at midnight Mass, carrying the statue of Baby Jesus to the manger. All of the grade two girls were interviewed by our Priest, and I was chosen! I was asked to wear my First Communion dress and crown. They brought me to the church basement and my mom went upstairs. Oh how I cried after her! The altar boys were so kind, asking what Santa was bringing me and getting me to stop crying. At midnight, with the church lit by candles and organ music playing, I walked up the aisle among the altar boys with Baby Jesus on a pillow, making those post-crying hiccup sobbing sounds the whole way. I can only imagine Father O’Donnell must have thought what a mistake he had made in choosing me to be our Church’s first Christmas angel.
Carol Marshall, Toronto, ON

I was born on December 25th and as my mother likes to remind me, it was the only year that she didn’t have to cook a turkey dinner. I am part of a wonderful and wacky family. We always try and spend every holiday together, but especially Christmas. One year, while living in a small home, my parents decided that they would rent a staff lodge near Algonquin Park, since the family was getting too large with kids and grandkids. It was a few days filled with great memories. We all slept in bunk beds, which the kids loved (the adults not so much!). For my birthday, they arranged a scavenger hunt. So there I was, on Christmas Day, accompanied by all of my family – young and old – plodding through the dense bush in at least two feet of snow. My job? To locate all the clues and put them together to discover where my gift was hidden. I don’t remember what my gift was, but I will never forget the laughter as we trod through those bushes, having snowball fights along the way, getting soaked to the bone in then entering the lodge to smell the turkey cooking and pies baking. It’s not where you celebrate, but whom you celebrate with. It’s all about family.
Sue Winfield, Frankford, On

When I was about 11 or 12 my family suffered financial difficulty and my father lost his business. I was the eldest of five children and knew my parents were worried. We had lost our house and some of our furniture and were living, all seven of us, in a two bedroom apt in an Ontario Housing project. That year, my mom told me that Santa might not come, as he might not know we had moved. She knew that I knew about the Big Guy in Red, but she wanted me to help explain to the others. We all decided to make fun little things for each other and our parents and had no expectations at all. My dad had been working two jobs trying to feed us and keep us clothed. We never saw him; he worked all day at a factory, came home to grab a bite and then went out to drive a Taxi. On Christmas morning we woke up excited to open up all the silly little things we had made with paper and glue and to eat the candy we knew had to be in our stockings. My dad was there and he liked to line us up according to age before we entered the living room. When we walked into that magical room, we squealed with delight. Somehow Santa found us. There was a tree full of lights and candy canes and a present for each of us along with a huge basket of all kinds of goodies. I could not believe it, nor could my mom-she burst into tears. After a day of fun, we sat down to an amazing meal and just as my mother said grace, my dad fell face first into the mashed potatoes, sound asleep. Seems that after working all day and then driving a cab all night, he came home to find the gifts and the basket outside of our apartment door and spent whatever sleeping time he had to assemble it all. We never ever did find out who left them. To this day, that is the happiest Christmas morning of my life.
Laura Lyford Rickards, Trenton, ON