Are teenage girls on track to be the next Stepfords?

Why are so many teenage girls aspiring to look more like Vegas showgirls than rebellious youth? 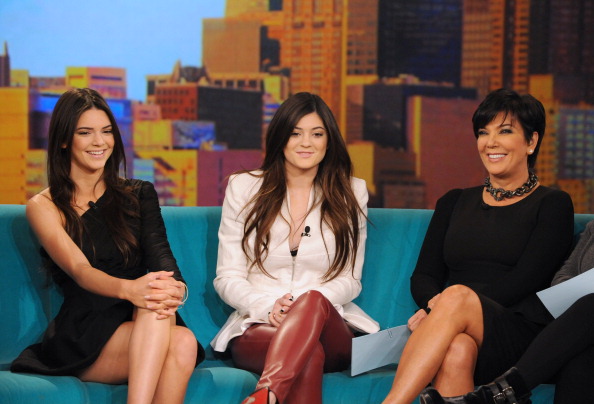 Seventeen-year-old Kendall Jenner joins her 15-year-old sister Kylie (centre) on The View alongside their mom Kris (Photo by Donna Svennevik/ABC via Getty Images).

Not long ago I attended a party marking the high school graduation of a friend’s daughter. The house was filled with 17-year-old girls, each one of whom had identically long, blond silky hair,  caramel tans, trout pouts, artificial eyelashes, mile-high heels and thigh-high skirts.

Impossible to tell apart, their median age looked to be more around 38; their contrastingly giddy and jaded attitudes and conversations were more suggestive of a tribe of Las Vegas showgirls than small-town Ontario schoolgirls.

I felt as if I had stumbled into a convention of Stacy Keibler clones.

The Daily Mail referred to them as Stepford teens in a recent article, young girls fixated on looking like the photo-shopped images used to sell tabloids or fashion.

A U.K. study conducted at York University suggests that in a global phenomenon, girls between the ages of 18-25 strive to achieve the impossible by trying to look red-carpet ready in time to catch the school bus each morning.

This is in glossy departure to previous generations of adolescents whose appearance, though uniform in its pretend non-conformity, tended to be socially rebellious, a visual challenge to the status quo.

If anything, too many teenage girls today seem hyper-socialized and striving — the typical 15-year-old looks as if she’s poised to sell a cosmetics line on the Home Shopping Network while navigating Sugardaddy.com

Research — and a trip to the mall — suggests that girls are wearing more makeup earlier while worshipping at the dubious altar of big breasts, tiny waists and swollen pouts.

Long gone are the days when pastoral beauties with flowers in their hair and bare lips walked shoeless through fashion magazines and in film.

In a case of sales-rep-cum-exotic-dancer chic gone mad, a growing number of adolescent girls, graduates of Kris Jenner U, are all about maintenance and money and looking like the sexually powerful girl in the Louboutins with line-free skin and George Clooney hovering in the background.

Oh, for the innocent outrage of go-go boots, bangs and bellbottoms!

It’s enough to make you nostalgic for Hammer Time.

Tell us, do you think young girls are acting, and dressing, too old for their age?