#tbt: Tales from the Chatelaine archives

In 1928, Canadian women argued for equal pay and equal representation. We’re still working on it. 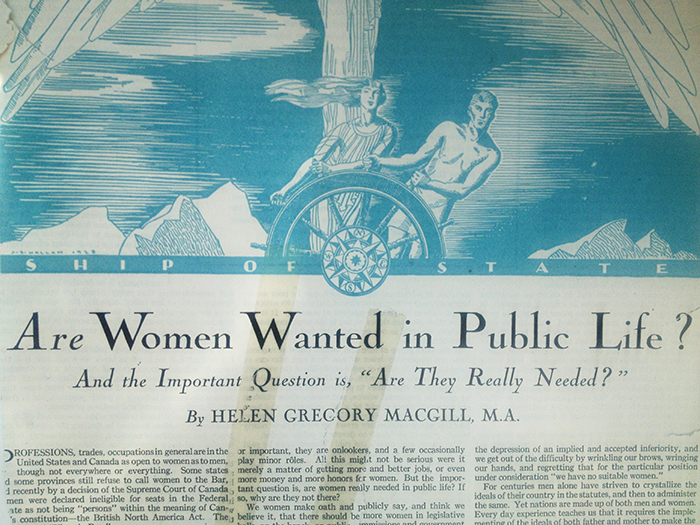 The times: The first machine-sliced loaf of bread is sold in Chillicothe, Missouri; Amelia Earhart becomes the first woman to complete a transatlantic flight; Mickey Mouse makes his silent-film debut.

The question: “Are women wanted in public life?” Despite having been granted the right to vote in federal elections 10 years earlier, Canadian women were a rarity in public office in 1928 — a fact admonished by Helen Gregory MacGill, a judge in British Columbia’s Juvenile Court, in this Chatelaine opinion piece. MacGill, also a member of British Columbia’s Minimum Wage Board, lamented the lack of female figureheads in government (and the workforce in general), and underscored the need for equal pay for equal work — both concerns that still (amazingly) persist 86 years later. So how much have the times changed? Read an excerpt from MacGill’s column below, and you tell us.

Are Women Wanted in Public Life?
And the important question is, ‘Are they really needed?’
By Helen Gregory MacGill

“…Women are apparent in the audience; if the drama is big or important, they are onlookers, and a few occasionally play minor roles. All this might not be serious were it merely a matter of getting more and better jobs, or even more money and more honours for women. But the important question is are women really needed in public life? If so, why are they not there?

“In spite of our demand for equality and our enthusiastic advertising of the abilities and attainments of women, we ourselves are not firmly convinced. We are suffering from the depression of an implied and accepted inferiority, and we get out of the difficulty by wrinkling our brows, wringing our hands, and regretting that, for the particular position under consideration, ‘we have no suitable women.’

“Despite allegations to the contrary, it is not differences of opinion, petty animosities, likes or dislikes that prevent more women from holding high place. Men suffer from these, too, sometimes differing in kind and variety, sometimes similar. But men have no ingrowing doubt as to their own ability. They are convinced that the Lord gave them dominion over all the animals, and the rest of the world, including women. They have held undisputed sway for so long that it requires education on both sides to make each realize that both are needed in national housekeeping, not because of any inherent superiority of one sex over the other, but because of their essential differences.

“Women are needed in municipal councils where questions arise concerning milk and water supply, housing, pure food, street cleaning, health, licensing baby and adult lodging houses, street lighting, supervision of parks, dance halls, market regulations. They are needed on factory commissions and inspections, minimum wage, hospital, school pensions, workmen’s compensation and other city and government boards. They are required on juries which deal with human difficulties of all sorts…. Each and every nation calls frantically upon women to help ‘win the war,’ but women are beginning to perceive that they are not earlier consulted to help prevent the war. Being asked to sacrifice their all, should women not sit at the peace table?

“…All questions of world politics affect women and children…but women will never sit there until other women determine we shall.”