Cosmetics are among the few items discounted by 30%, most 10% off 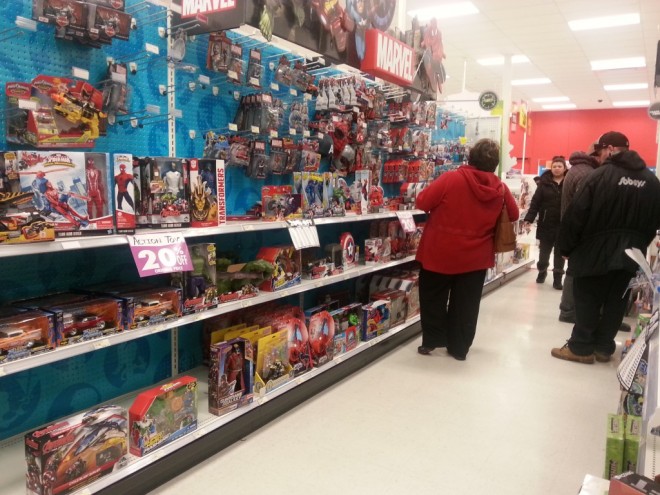 It looked like a regular Saturday morning at the mall—only it was Thursday morning and all cars were parked in front of the local Ajax, Ont. Target store. Shoppers had lined up, some as early as 6:00 a.m., to get inside on this, the first day of Target Canada’s liquidation sale.

Once inside, shoppers quickly dispersed to various parts of the store—only to be met with less than stellar savings.

“It’s not really a good deal,” said a father of two boys as he examined the 20% off Lego toys (he chose not to be named). “Not when you compare the prices to Toys’R’Us.” But when asked if he would wait before buying he quickly shakes his head. “If I wait until it’s 30% off there won’t be any left.” Given that half the shelves that stock Lego are already empty, he may have a point.

Other shoppers in the toy aisles were similarly unimpressed. “It’s not really a deal,” said another dad (who also didn’t want to share his name), “actually it’s quite underwhelming.”

For those familiar with Target-only brands, there were some decent discounts. Lamps, regularly priced at $39.99, where discounted by 20%, as were all picture frames. But for Target’s well-known Threshold furniture collection you can only expect 10% off (saving you $10 off a  $99.99 end table). Household goods, such as pop, toilet paper and cleaning supplies were only 10% off, as were beauty products such as hair-dryers and shampoo. However, shoppers flocked to the cosmetic aisles that offered 30% off Covergirl and other brand names.

The check-out line-ups were long, but moved relatively quickly. Still, not all shoppers were willing to wait the 20 minutes for a cashier. “Why bother for a $15 watch and an iPhone that now costs the same as everywhere else?” said Monica Druvell, a nurse who stopped into the Ajax store before going to work.

This article originally appeared on MoneySense.ca.