As guys gear up for hundreds of hours of playoff hockey, Jennine Profeta finds smart Canadian gals are making plans for all their freed-up time 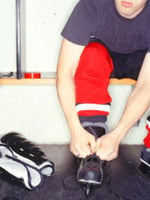 Brace yourself, ladies, they’re back…. No, not stirrup pants – hockey playoffs. Those umpteen weeks in the spring when you can’t get the garbage taken out or squeeze in a little nookie before 10 p.m. – and that’s when the game doesn’t go into overtime.

This year should be even worse given the National Hockey League’s (NHL) lockout last season. Even in your sexiest lingerie, you’re no match for Don Cherry in a high, starched collar and a bunch of sweaty goons missing half their teeth. Sound distressing? It needn’t be. Meet six experienced hockey widows who offer advice on how you can make the most of playoff season and stay as cool as a Zamboni driver.

Screaming from the sofa

Estee, a self-described “hockey widow in training,” is encountering her first NHL playoffs with her fiancé, Gord. “I asked him if he was going to watch the playoffs and he said, ‘You better believe it!'” she says of her normally active, outdoorsy he-man. “I didn’t know this about him because there was no hockey last year.”

To prepare, Estee, an administrative assistant in Winnipeg, will be taking a lesson from the playbook she acquired watching Gord’s weekly pickup hockey games. “Hockey’s a lot more fun if you can get into it,” she says. “I’m not normally a yeller, but now I find myself getting emotionally involved when someone is slammed into the boards. It’s addictive.”

Estee’s most recent training was watching the two Canadian hockey teams compete in the Olympics. “I’d pop a big bowl of popcorn and make a little party out of it,” she says, adding she used the time to educate herself. “Once you know a little bit about the rules, it makes things more interesting.” Still, she’s not going into playoff season without her sense of humour. “The other day my son said to me, ‘I bet you don’t even know what icing is.’ I said, ‘Sure I do. It’s the best part of the cake.'”

She knits, she scores

Just how long are the playoffs? Let’s look at the stats from two years ago: between April 7 and June 7, 2004, 89 games were played, including the Stanley Cup finals. While each game consists of one hour of actual playing time, at least an hour and a half is devoted to breaks, commercials and overtime. So, that’s 89 games x 2 hours of TV viewing = about 223 prime springtime hours. That’s time your man could be doing something romantic, such as taking you for a walk or cleaning out the garage.

So how will hockey widows while away the time this playoff season? For some, it’s by being more craft-y than their couch-potato husbands. Leanne of Hamilton, Ont., will be knittin’ instead of bitchin’. “During the playoffs this year, I’m going to make my husband something special,” says the part-time journalist and full-time mom. “I’m going to knit a cardigan. Since he’ll be watching hockey every night for two months, I’ll have plenty of time to finish it.”

Leanne says she’ll join her husband in the family room and keep an ear open if the Toronto Maple Leafs or Montreal Canadiens are playing. And when the beer commercials get too annoying, she’ll pop on her headphones and tune into podcasts – such as www.cast-on.com or www.knitcast.com – she downloaded earlier in the day. “With knitting I can zone out or pay as much or as little attention as I want,” she says.

Kerry exercises her creative muscle away from the TV. The Toronto-based project coordinator says her partner is “a fanatic of any sport that involves people moving their legs and passing or catching things.” So while he’s preoccupied, she retires to her studio to work on her own vintage clothing company. “It used to be more of a concern,” Kerry says about her man’s sporting obsession, which she’s put up with for 23 years. “But I’ve replaced it with other things.” One of which is a master’s degree she’s currently pursuing. “It’s an opportunity to work on my research project, and I can bear down and focus,” she says. “Now the playoffs are actually a good thing.”

Sixty-minute penalty – in the tub

Jansje has had to cope with her hubby’s hockey schedule for 18 years. She estimates that Grant watches at least six hours of hockey a week during the regular season – a total that goes way up at playoff time. “Our dining room is set up so he can watch the game during dinner if there’s one on,” she says. Though it was a bit of a why-can’t-you-spend-that-time-with-me issue when they first started dating, she insists it isn’t a big deal now. “I don’t feel like a hockey widow. I feel like a liberated woman.”

That’s because the stay-at-home mom in Calgary has learned to use hockey to her advantage. When their two daughters are in bed, she finally gets some time for herself. “Grant works from home so it’s nice when he’s occupied,” she says. “It’s like sending him on a play date. Someone else is entertaining him.” That’s when Jansje breaks out the bath bombs and hits the tub. “I get the paper out and read the entertainment section,” she says. “I have more than an hour to myself – it’s precious time.”

While it’s easy to mock man’s favourite Canadian pastime (other than “writing” his name in the snow, that is), many women know the hockey playoffs aren’t all fun and games – especially when a man’s preoccupation starts interfering with his relationships.

m.j. of Hamilton, Ont., says she was once a hockey widow “to the nth degree. My husband was a Habs fan,” she says, referring to the Montreal Canadiens’ nickname. “We actually had to drive more than eight hours to see their home games. I endured the hockey season while we were courting, but the novelty wore off once we were married.”

While m.j. admits that “the NHL itself did not destroy my marriage,” she did take advantage of his hockey watching to get out of a bad situation. “My secret was studying,” she says, “studying to get my certified general accountant designation. It led me to the road of independence that gave me the guts to leave him.”

Today, she’s happily remarried to a – you guessed it – hockey fan.”Hockey season is now bearable,” she says. And while she’s started working on her MBA and plans to hunker down during the playoffs, she says Hubby Number Two needn’t worry. “Despite his love of the game, he has so many redeeming qualities for which I’m most grateful.” One is his willingness to give her a foot massage while he’s staring at the tube and she’s taking a study break. “If he didn’t have more than a passing interest in hockey, and the playoffs in particular, I’d wonder what was the matter with him.”

Just because your man’s at home doesn’t mean you have to be – hello, free babysitting! Leanne says she’ll take advantage of her hubby’s couch- potato status to pursue her training as a birthing coach. Other women may be apt to hear the call of the wild – girls gone wild, that is.

It was during the regular hockey season that Ruby learned that Kinki, her favourite sushi restaurant in Ottawa, hosted a weekly hockey widows night. Since then, she and two or three girlfriends have been going there every second Thursday. During this season’s playoffs, Kinki’s is kicking these evenings up a notch by offering ladies their first champagne cocktail on the house, in addition to oysters on the half shell and a roaming cabana boy. “I can’t talk with my friends at the movies or spend all night having just coffee,” Ruby says. “This way we can dine and chat and still pick up the phone if the kids need to call.”

The mother of three is usually busy during the day helping run the family business, a Chinese restaurant called Mekong. She says she often buys hockey tickets so her husband and Mekong’s chef can take a break and she can have her girls’ night out. “This way you don’t have to worry about the men getting jealous or feeling left out,” she says. Although, at this time of year, she might change her social calendar a bit. “I might join him during playoffs,” she says. “I want to cheer for my city’s team as long as they’re in.”

These are just a few of the ideas that women will be trying this spring. Leanne also intends to write on her blog and get into her Gilmore Girls DVDs, Kerry might catch up on her TV watching and m.j. plans to do some online shopping because “he agrees to pretty much anything while he’s engrossed in the game.” The key to survival seems to be remembering the word “play” in playoffs. So have fun and save quality date time for those rare nights when there isn’t a hockey game on – like sometime in August.