When unretouched photos of Cindy Crawford leaked, people applauded her bravery and her body. The praise is misguided. 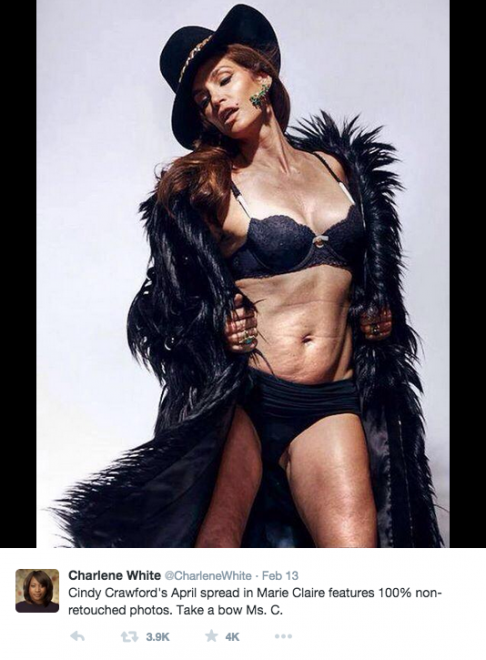 Mid-February, mid cold snap is not when I’m thinking about bikinis and lingerie. But last weekend, my Facebook and Twitter feeds quickly filled with joyous shares of an unretouched 2013 photo of Cindy Crawford in a bra and panties from the Mexico/Latin American edition of Marie Claire. The cause of the fuss: the puckered skin and stretch marks on her belly and thighs. (Crawford was 47 at the time the image was shot.)

Most of my Facebook pals assumed at first that the leak was deliberate (it wasn’t) and called Crawford inspiring and brave. Marie Claire spun the situation with statement noting, “it is real, it is honest and it is gorgeous.”

Am I the only one who finds it exhausting?

I appreciate the you-go-girl sentiment behind the response and the cheerleading of attempts to pull back the curtain on the fashion and beauty industry, whether it’s running photos of makeup-free models or pushing for more racial diversity on catwalks. But there’s something so utterly, depressingly low stakes in high-fiving a conventionally beautiful woman, who’s made a fortune from her face and figure, for being in possession of a trim middle-aged body with a smattering of well-earned battle scars. So, good on Cindy, I thought at first. Immediately followed by, who cares?

Empowering or not, it still seems a part of the general watchdogging of women’s bodies, of making meaning or virtue out of our appearance and having that measured by other people. (It’s worth underlining that Crawford didn’t leak the image herself.) Crawford’s photo reminds me of a paparazzi bikini shot of a vacationing Helen Mirren that circulated a few years back. It was universally agreed upon that the sixtysomething actress had a smoking bod, but Mirren felt ambivalent about the photo being published and the reaction to it, once remarking that it will haunt her for the rest of her life.

There’s an edge of condescension in congratulating an older woman for still looking hot. It’s as if her only options upon turning 40 were a) to accept her new lot as a crone by pulling on a pair of sweatpants and giving up on all hopes of a sex life, or b) to spend all her precious time frantically attempting to attain or maintain the looks of a woman half her age. Gwyneth Paltrow once gloated that her gruelling sessions with a personal trainer gave her “the butt of a 22-year-old-stripper,” as though that was an achievement most women dream of. (Also: How much cooler would GOOP have been if she had bragged about taking gruelling law school classes in order to get the brain of an 81-year-old Supreme Court justice?)

If one of the pitfalls of getting older is that women feel invisible, then the upside of aging is the other side of that coin. Freed from that gaze, aging gives you the opportunity to set your own standard of what makes you feel and look attractive. There’s nothing wrong in acknowledging that an over-40 woman looks great — just don’t assume she needs that affirmation in the first place.