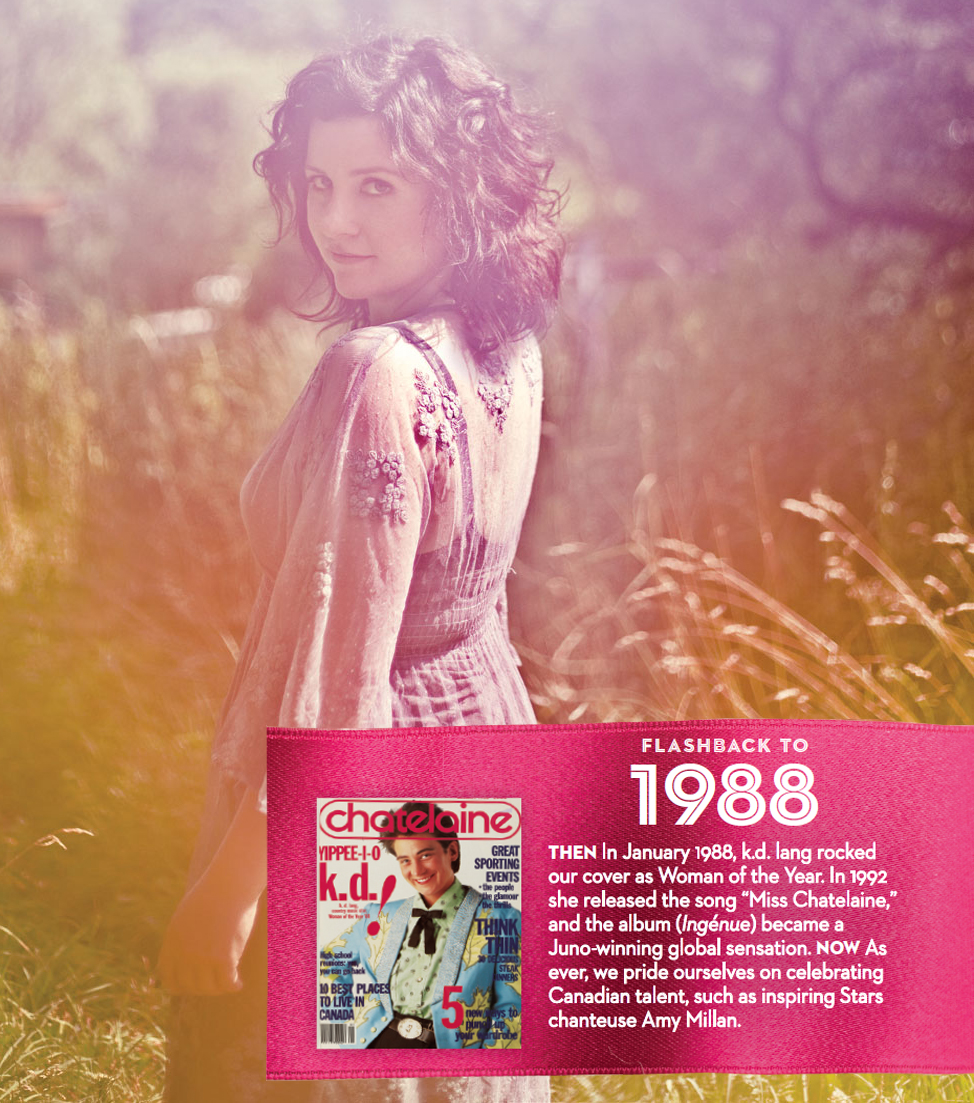 When Amy Millan waltzes off the stage after a sold-out Stars concert, fans must surely wonder which cool after-party the charismatic brunette will hit up first. But there’s only one place you’ll find her: on the tour bus snuggling up with her two-year-old daughter, Delphine.

“There was never any question about whether she’d come with us,” says Amy, who’s married to Stars bassist Evan Cranley. “Now at tour stops, the first thing isn’t to find the best coffee; it’s to find Delphine a great place to play.”

Amy subscribes to the motto “Unconventional doesn’t mean dysfunctional.” When you’re part of one of Montreal’s most beloved bands, with more than half a dozen records under your belt, what else can you do but embrace the chaos that comes with raising a child on the road? “Parenthood, no matter who you are or what job you do, is an incredible challenge,” says Amy. “But Delphine definitely makes everyone feel more cheerful and together, because you can’t be coming apart at the seams if there’s a toddler around.”

So forget those seedy-tour-bus stereotypes: Instead of cigarette butts and whisky bottles, think sippy cups and sticker books. When Amy decided to bring Delphine on the road, fellow chanteuse Martha Wainwright gave her some tips to make touring — with the help of a nanny — a family affair.

Although Amy has become accustomed to the tight living quarters of their house on wheels (she manages to find space for more than 12 pairs of designer heels, including her prized Manolo Blahniks), she’s always happy to be homeward bound. Her airy hideaway in Montreal’s charming Plateau neighbourhood is the perfect place to retreat from the limelight.

“We took a classic 1910 Montreal duplex and stripped it down to its original studs and converted it into a home . Evan and I designed the house , and I’m so proud of us for  doing it as a couple — we even put our initials in the concrete floor in the basement.”

With French-country flourishes — a truly unusual and interesting motif for a gal who describes her wardrobe as “cashmere days and glittery nights” — the historic house is where they work on new music and host intimate listening parties , as they did for the Stars’ latest album, The North. “Kevin Drew from Broken Social Scene [a renowned Canadian indie music collective] came over one night, and Evan cooked the most incredible meal, and we played it for him,” says Amy, a Broken Social Scene collaborator herself. “It’s always so important to get feedback.”

So with Delphine growing up in a world where all-star musicians drop by for dinner and the term sound check is as familiar as stroller, is Amy grooming her mini-me? Not unless it’s by her daughter’s own design. “We’re showing our kid that we’re committed to living the life we love. I hope that kind of parenting inspires her to follow her passion, even when things aren’t easy.”

My proudest moment was… giving birth to my daughter.

I define downtime as… going to the cottage, where our phones still don’t get service. I call it “rehab, but with booze.”

I wish I had more time for… myself, so I could write more.

The last time I lost my temper was… because I was upset about my daughter being sick.

I wish I was better at… handling stress.

I wake up in the middle of the night thinking about… the tour bus going into a ditch.

My favourite moment of the day is… putting D to bed and getting up onstage to play a show.

The biggest mistake I ever made was… thinking I would be forever young.

Five things Amy can’t live without (while on tour)

1. Now Vitamin C crystals: The tour bus is a big germ factory, so I load up on vitamin C to boos my health — losing my voice is not an option!

2. My FHI hair straightener: I have natural curls, but my bangs can be unruly, so I need to flatten them into submission.

3. Avène Thermal Spring Water: Travelling is a dry business; this spray makes me feel less like I’m in the Sahara.

4. Perfect Potion Green Tea and Jasmine Body Spray: I found it in Australia and love it. It’s so handy when there’s no time to shower.

5. Prestige Classic Khol: I love how it looks on camera — and it can really brighten up a tired face.