Watch some of the country's silliest, smartest, cheekiest comedians in action 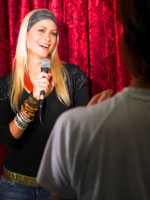 Famous funny canadians Jim Carrey, Catherine O’Hara, Mike Myers and Martin Short got their start as stand-up comedians or as part of a sketch troupe. It seems we export more comedians than bottles of maple syrup.

If you look at the roster, though, it appears that comedy is a man’s domain. But that’s not the case. Since the 1920s, when Toronto comedian Beatrice Lillie (whom Noel Coward called “the funniest woman of our civilization”) starred on stage and screen, many daring Canadian dames have taken on subjects even the ballsiest of male comedians won’t touch.

We thought it was time to introduce you to the current batch of future exports and give you a chance to see them in action. We say introduce, but chances are you’re already familiar with some of these women from film, tv and, if you’re a live-comedy fan, clubs such as Yuk Yuk’s and festivals such as Just For Laughs. Cue the snare drum….

Hometown Tillsonburg, Ont.
While working as a tour guide at a tv station, DiGiovanni discovered she had a natural aptitude for stand-up. She quit her job, spent a year at Humber College’s School of Comedy in Toronto and then, in 2000, threw herself into the business. Her material is autobiographical. “I hate the term self-deprecating. I talk about life.”

Line “I promised my doctor I wouldn’t follow any more fad diets, but instead promised to lose weight naturally this time. Now I’m just praying for a parasite…or a tapeworm. Come on! It’s like a metabolism buddy! I have a friend who went to Africa and contracted a parasite, and she can eat whatever she wants – whatever she wants! Sure, she’s gone now…but wow! She looked good.”

Hometown Toronto
To Davis, a mother of three, stand-up comedy has always been an escape. “I lived around the corner from a comedy club,” she says of the first time she tried amateur night, “and needed to get out of the house.” Davis is a regular on the Yuk Yuk’s comedy circuit and is now doing public speaking, lecturing audiences on the importance of humour in parenting. “My material is just how I feel as a mother, as a woman. I’m just too tired to lie.”

Line “We moved out of the city because of the kids – but they found us…. I’m not your average soccer mom. If my kid scores, I just honk from the car.”

HOMETOWN Huntsville, Ont.
SIGNATURE A sketch comedian and actor, 20-year-old Murphy’s favourite creation is Daisy, a woman who repeatedly gets pregnant “for all the wrong reasons.” “Someone told me to put the kids up for adoption. No way. I’d sell them but I’d never give them away.”

HOMETOWN Calgary
SIGNATURE Fraser, 23, is a stand-up with a deft sense of timing and razor-sharp delivery. “I was making out with this dude the other night and everything was going great. I started moving my hands lower and lower and that’s when I felt it – the elastic waistband on his jeans. First I was shocked, but then I was impressed. Usually you can’t get jeans like that past the age of eight.”