Spouses not invited: I can't join my boyfriend on his work trip

What’s up, my friends, with trips where spouses are not invited? For the past few weeks, I have been moaning about the fact my guy is going away on a work related soccer tournament. 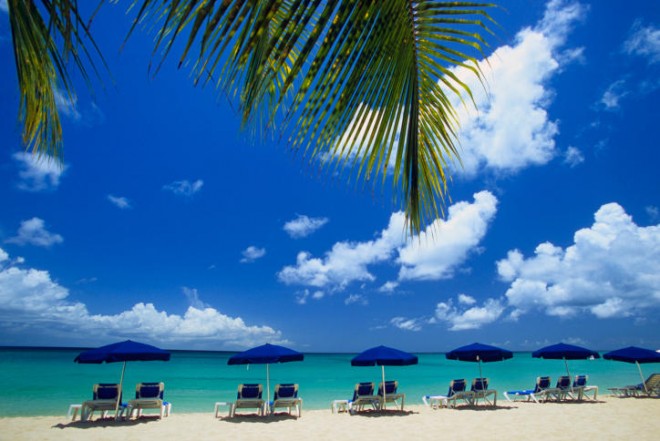 What’s up, my friends, with trips where spouses are not invited? For the past few weeks, I have been moaning about the fact my guy is going away on a work related soccer tournament.

Now, don’t get me wrong. I don’t care that he has his own life. As someone who likes a lot of alone time, I’m like, “Go forth. Play soccer!” But then I found out the soccer tournament is in Barbados and that spouses weren’t invited.

And that ruined my life. Or at least, it has ruined my boyfriend’s life as I’ve been complaining about his trip, without me, for weeks now.

Yes, it is true that I wouldn’t care so much if, let’s say, the soccer tournament took place in Baltimore or Winnipeg. (Not that those places aren’t fantastic, but they aren’t sunny with great beaches!)

But what got me really angry is that my boyfriend did actually ask if I could come, because he loves me and wants me to be with him. However, the “head honcho” of this soccer tournament made it explicitly clear that spouses were not invited.

My guy even wrote back saying I would not get in the way. (And I wouldn’t! I’d be like, “Go play soccer! You’ll find me here on this beach chair reading a book!”) But the response was, again, “Spouses are not invited.”

Now, when someone tells me I can’t do something that makes me want to do it even more. So for the past week I’ve been saying things like, “Well, he doesn’t own the island” and “I’m going to book my own ticket to Barbados and I’ll just stay at another hotel. I can do that, you know.”

What is it with men who don’t want their spouses around? What is it with companies who go on getaways and don’t invite spouses? As if us women will ruin your little soccer game or bonding with colleagues by being there! My boyfriend stuck up for this no-spouse rule, sort of, by arguing something about “bonding time with the guys” and “Not all wives are as easy-going like you. They need to be with their guys and will ruin the experience by demanding their men spend their free time with them.”

I told him again that I’m not that type of woman. But in any case, it got me thinking about “boys’ weekends” and business trips where spouses are explicitly not invited. And I just thought, “Well, screw all of you!”

Then I asked relationship expert Ashley Howe, who can be seen weekly on The Marilyn Dennis Show, for her input. Was I being unreasonable that I found it offensive that I was not only not invited but explicitly told not to come?

1. Some companies, she says, don’t allow spouses because they are cheap. “I think they also sometimes have the idea that if spouses join in will ruin the whole colleague bonding and morale boosting thing. In that, colleagues will prefer or opt to hang out with their spouse in favor of leaning about their co-workers outside of work.”

2. However, she says, if a spouse wants to bring you, it is worthwhile to ask. “Perhaps it will be a good excuse for the company to re-think their policy. If the company is asking an employee to be apart from family in otherwise family time (like a weekend) the option should be there anyhow and if the option isn’t there, then the employee should technically be allowed to opt out of the company getaway.” She goes as far as suggesting that if the company really wants employees to join, they should provide some travel expenses for the partner to join.

3. It is permissible, on spouses-allowed business trips, to have times of day or night that are strictly work/colleague based and other activities or times that allow the partner to join.

4. It’s not always a bad thing to have your partner go without you, she reminds me. The positive? “It could be an opportunity to have some small time apart to once again be reminded of one’s individual life.”

5. I ask if it was unreasonable that I was upset that I was not only not invited, but also explicitly told not to come. “It is always okay to be upset. But be certain to avoid ‘blame’ in your upset, especially if it is a really nice place. It is not your spouse’s fault; so direct the upset in the right place.”

6. My guy should make it up to me, because I am upset, by ensuring we go somewhere special soon after, and he also must ensure that I feel secure while he’s gone.

7. She even thinks that I should be able to join after that part with the “silly boys” is done. “Like if it ends on a Tuesday join them on Wednesday?” But she does say if it’s just a “friend” thing where they just don’t have partners come, then I should tell myself that “I will be the independent strong woman that you are and be cool with him going as long as he figures out some way to do something special that I want to do after.”

8. I ask her if it would be wrong if I went to Barbados anyway. “I wouldn’t,” she says. “It may just be uncomfortable and who wants to be uncomfortable? Plan the most perfect circumstances that you want to go with him instead. This trip is not it.”

And, also, why the heck do I want to go somewhere where I’m not invited? As if I want to be with you guys! The truth is, I care more that it is in a hot, sunny place than I do about not being with him.

What do you think of not being invited on your spouse’s business trips? And, face it. I am an independent woman who will book my own trip. And, head honcho of soccer, you most definitely are not invited. In fact, you are not even worthy to be on my holiday card list.