Smart Guide: get what you want

Learn how to negotiate almost anything – an airline upgrade, a new vehicle, even a raise 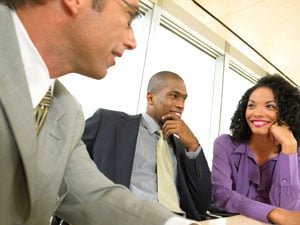 You’ve mediated a truce between your two kids while manoeuvring your vehicle through rush-hour traffic. You’ve convinced your electronics-loving husband that, no, he actually wouldn’t be better off with the newest iPod. And you’ve even convinced your dog that she doesn’t control the pace of your morning jogs. But are your powers of persuasion restricted to warring children and a wayward canine? The truth is, armed with a few pointers, you can negotiate almost anything: an airline upgrade, a new vehicle, even a raise.

How to negotiate a raise

As a national recruitment consultant with more than 10 years experience, Shannon Jackson has heard a host of reasons why people want a raise (“I’m supporting an ill relative,” “It’s been over a year since my last one” and “So-and-so received a raise – I should too”). But really, only one approach works. “You need to demonstrate how you’ve carried out responsibilities outside the original expectations of your role,” says Jackson.

Sounds easy enough, but you can’t just say it; you have to prove it. That might mean highlighting – with actual dollar figures, if possible – how you saved or made the company money. Or it could mean pointing out you’ve taken on additional responsibilities. Jackson also recommends keeping a “happy file,” an ongoing list of your accomplishments. That way, you can pull out information from the happy file to convince your boss (and yourself, too) that you’re worth the money. A few other strategies can help improve your odds of a generous salary bump:

• Watch your timing. If your performance review is not tied to an annual raise or if you’ve recently taken on new job responsibilities, you’ll have to wait until the fall: Hit your boss up in October or November, when most employers plan for next year’s budget. “It can be challenging from a budget perspective to significantly increase a salary mid-year,” says Jackson.
• Avoid uptalking. When nerves cause you to end every sentence as if asking a question, the rising inflection conveys insecurity. “Practise asking for a raise in a steady, confident tone of voice,” says Nina Spencer, a keynote speaker, author and professional-development workshop facilitator. Simply put, don’t sound like you’re requesting a favour.
• If you can, negotiate before you start a new job. According to new data from Statistics Canada, wives who were the breadwinners in 2003 earned on average $41,200. Husbands in the same position? $57,800. Jackson says that, in her experience, fewer women than men negotiate their starting salaries, believing they should first get in the door, wow their employer and then ask for a pay hike. Yet typically a company’s first offer of employment isn’t the only one. “And you know what? A two per cent raise of a $60,000 salary is a lot more than two per cent of a $50,000 salary,” says Jackson.

How to negotiate the best price

In traditionally male environments such as car dealerships, salespeople hold the upper hand – or so it seems. They’re trained to sweet-talk you so that, before you realize it, you’re walking out with something that costs way too much. The truth is, you can level the playing field.

Buying a new vehicle? Find out through websites such as CarCostCanada.com, CarQuotes.ca or organizations such as the Automobile Protection Association how much the dealership actually paid for the car. (The APA charges $26.75 for this info.) Has the automaker offered the dealer any “hidden” incentives? A cash rebate, for instance, can shave $1,000 off the sticker price, yet many dealers will pocket the money themselves rather than pass the savings onto the buyer, warns Michael Turk, a lawyer for the Automobile Protection Association.

You can also negotiate – and save – while shopping for a new computer. Your best bet is to find a place where salespeople work on commission. It’s not usually advertised (you can flat out ask, but even then they might not fess up), so it’s a good idea to visit an independent store or Future Shop, where, unlike at Best Buy, the staff is motivated to close the deal. “I find when I say, ‘Can you give me a better offer?,’ they’ll knock $50 to $100 off the retail price,” says Amber MacArthur, new-media specialist for CityTV. Or, at the very least, ask them to throw in free software.

How to negotiate an upgrade

Don’t want to be cramped on your next flight? Look sharp. “The agent will pick someone who looks presentable to upgrade to business class over someone who’s lounging in their sweats,” says Debbie Ross, president of the Women’sTravelNetwork.ca in Toronto. Arrive at the terminal early (as soon as you see an employee there) so your request is near the top, and travel solo. (Yes, travelling with kids is a deal breaker.)

Checking into a hotel? Roger Soane, general manager of the Fairmont Empress in Victoria, says hotels will negotiate upgrades with travellers on the day of check-in. “We’ve had people check in and upgrade for just $25,” says Soane. “We’ve also had people pay $200 to $300 extra for the best suite in the hotel, which is a lot less than they would have paid for a general reservation the week before.”

But be sure to figure out what an upgrade means to you. A jacuzzi tub? Pretty view? More space? Your definition determines how much – or how little – you negotiate to pay.

No matter what you’re negotiating for, follow these laws of persuasion:

• Ask and ye shall (hopefully) receive. You’ll never score a better price or an upgrade if you don’t ask.
• State your case professionally and politely. No one wants to help out someone who’s aggressive and confrontational.
• Do your homework – for instance, check online if you’re in the market for a car (or even talk to your neighbour who just bought a new one). It can pay – literally – to be prepared.
FILED UNDER: car Smart Guide Travel