A look at Christmas traditions around the world 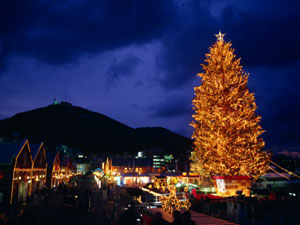 A nine-day tour of the town
Christmas festivities in most of Mexico begin on December 16th and stretch over the following nine days. Over this period of time there are a series of posadas – fiestas representative of Mary and Joseph’s search for lodging prior to Jesus’ birth. Typically, each family in a neighborhood will schedule a night for the posada to be held at their home, starting on the 16th of December and finishing on the 24th. Over this period, groups of townspeople go from door to door and are often called inside homes to participate in the breaking of a gift-filled piÃ±ata. Children don’t typically expect gifts from Santa Claus on December 25th, but instead receive them on the 6th of January from the Three Wise Men. Children leave notes in their shoes, placing them below the Christmas tree so The Wise Men can fill these requests while they bring baby Jesus their three gifts.

Prayers and pranks
Christmas in Colombia is celebrated as a very religious holiday. The unofficial start of the festivities takes place on December 7th, which is called Día de las Velitas, or “Day of the Candles”, when streets, sidewalks, balconies, porches and driveways across the country are decorated with candles and paper lanterns in honour of the Immaculate Conception which takes place the next day.

December 16th marks the first day of the Christmas Novena, nine days of prayer; the last one on Christmas Eve. The Novena is a call for a better understanding the real meaning of Christmas, and a way to fight the commercialism of the season. The Catholic Church promotes this tradition as a staple of Christmas. Christmas Eve is the most important day of the season in Colombia. Families and friends get together pray the last Novena and wait till midnight to open the presents, then parties go on till sunrise on Christmas Day. In Colombia, gifts are brought to children by “El Niño Dios” (Baby Jesus) instead of Santa Claus. Santa is still an important Christmas figure, but his role in gift giving has been down played by the church.

Another part of the Christmas season in Colombia is “Día de los Inocentes” or Day of the Innocents, which takes place on December 28th. This is a day for playing tricks on people, similar to April Fool’s Day.

Honouring the elders
The festive season in the Philippines begins with nine days of dawn masses starting on December 16th. December 24th is the much-anticipated “Noche Buena,” which is the traditional Christmas feast after midnight mass. Families typically attend street pageants on Christmas Eve and then head home to dine together.

On the morning of the 25th, Filipinos typically visit members of their extended families, notably the elders in order to pay their respect. This custom is called Pagmamano and involves touching one’s forehead to the elder’s hand during the visit and saying “Mano Po”. The elder then blesses the person who paid respect. Money is typically given after the Pagmamano, usually to younger children.

Tradition and superstition
In the Czech Republic, Christmas is celebrated mainly on December 24th, when gifts are given in the evening. According to tradition, gifts are brought by “little Jesus” instead of Santa Claus. People are taught not to eat anything for 24 hours preceding dinner on Christmas Eve. Children are told that fasting faithfully will result in seeing a “golden pig” at supper time. Dinner is served when the first star of the night is seen. Other Czech Christmas traditions involve predictions for the future. After Christmas dinner, every person present is given an apple to cut in half (crosswise, from the stem down). Both halves are shown to everyone around the table. If the core is shaped like a star, it means that the following year will be successful, while a four-pointed cross suggests a bad year on the horizon. Gifts are typically opened after dinner.

A visit from a sea-faring man from Spain
In the Netherlands, Sinterklaas, the Santa-ish white-bearded patron saint of children, is said to arrive by steamboat from Spain each year in mid-November. He is accompanied by his helper Zwarte Piet (Black Peter). On the evening of December 5th, which is called Sinterklaasavond, people give one another anonymous gifts accompanied by poems about the recipient, written by Sinterklaas. Dutch children leave their shoes out on many nights leading up to the actual celebration, to find them filled with small treats in the morning. December 5th is traditionally recognized as the main gift-giving day in the Netherlands, with December 25th being a lower-key, more religious event.

The celebration of Christmas is popular in Japan, although it is not a national holiday. In contrast to western customs, Christmas Eve is a time when lovers go on special dates, exchange gifts and stroll around admiring Christmas lights. Christmas is not nearly as important as New Year’s Day, which is the most sacred holiday in Japan. All Christmas theme decorations come down on the 25th and are replaced by New Year’s decorations. January 1st to 3rd are called shogatsu (Japanese New Year). During this time Japanese families gather together and eat special dishes called osechi ryouri, which are sets of specially-prepared, artistically-presented dishes packaged in multi-layered boxes. Each dish within these boxes carries a particular meaning. For example, prawns represent long life, cooked sweet black beans represent health and sweet chestnuts and mashed sweet potato represent happiness.